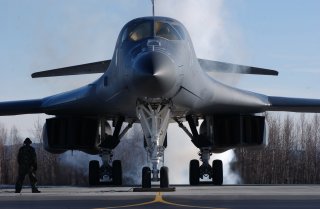 Despite tough talk about Rocket Man and North Korea, there has been little substantive action on the security front from the Trump administration and the Department of Defense. With the exception of farther-north-than-normal B-1B bomber flights, it appears to be business-as-usual in these unusual times. There may be more behind the scenes, but visible and substantial action is needed to deter aggression from the Democratic People’s Republic of Korea (DPRK).

The tough UN sanctions and China’s surprising move to cut off banking interaction with DPRK banks are positive steps but have two major shortcomings. These moves will take a long time to have a remarkable effect on the hardscrabble North Korean economy. More significantly, history tells us that the Kim regime and the country itself are remarkably resilient in the face of sanctions, isolation, and even severe famine.

The dilemma for President Trump lies in finding meaningful action that will deter but not inflame. The extraordinary level and apparent progress of North Korean missile and nuclear testing presents a real threat to the United States and its territories, amplified by Kim Jong-un’s assertion that the U.S. has already declared war on the DPRK.

The threat may seem remote to Americans on the U.S. mainland, but not so for residents of Guam and Hawai’i. Guam is protected by Terminal High Altitude Area Defense (THAAD) missiles and the Army/Navy Transportable Radar (AN/TPY-2), but the state of Hawai’i relies on distant and limited coverage from Ground-Based-Interceptor (GBI) missile defenses in California and Alaska. Hawaiian government officials recently integrated attack warning into its disaster notification tests, and advised citizens to stockpile 14 days of food just in case. The Hawai’i state board of education has stated publicly that its schools are not prepared for such a contingency.

North Korea has heightened the angst with word and deed. Beyond the vitriol, Kim’s regime has conducted missile tests at an astonishing rate, demonstrated new capability, and claims to have a new thermonuclear (H-bomb) weapon. Hawai’i could be an attractive target for the North. It is closer, and less-well defended than the continental U.S., and is home to U.S. Pacific Command and its five component commands. A successful attack against Hawai’i would have a crippling effect on the U.S. response to North Korean aggression. It must be at or near or at the top of list of potential targets of the DPRK.

Can the GBI interceptors defend Hawai’i? Chairman of the Joint Chiefs of Staff General Dunford, Pacific Commander Admiral Harris, and the state’s congressional delegation believe so. While advocating improved defenses for the islands, all have advocated a measured pace, reliant on long-term investment in a ground-based radar, a path essentially unchanged in the light of North Korea progress. The Advancing America’s Missile Defense Act of 2017, under consideration in the Congress, takes a similarly measured approach and only mentions Hawai’i once.

Hawai’i has to rely on a system that likely can protect against a tiny number of enemy missiles by launching interceptors from Alaska, which are positioned to defend the U.S. mainland, to the extreme edge of their range; a shield that Admiral Harris has admitted could be “overwhelmed.” Reliance on GBI alone is an unacceptably dangerous gamble.

General Lori Robinson, Commander of U.S. Northern Command, testified before the Senate in April stating that ‘‘as adversaries continue to pursue credible and advanced capabilities, we too must evolve our missile defense capabilities to outpace increasingly complex threats.” Yet little is being done to improve the protection of our most vulnerable state.

The President can, and should, request more funding from Congress for missile defense, although that will not deter North Korea today. Right now, he can direct expansion of the dual-use of the Aegis Ashore system at Pacific Missile Range Facility on Kauai for operations during a crisis in addition to its current test activity. He could further direct the deployment of a forward-based X-band radar, coupling Aegis Ashore with sufficient SM-3 interceptors, and consider deployment of THAAD to Hawai’i.

Admiral Harris and Pacific Fleet Commander Admiral Swift are able and experienced military leaders whose advice the President no doubt trusts, but Mr. Trump must address the bigger issue of how to match his tough words with real action – and enhancing the defense of Hawai’i would do that. Both admirals will leave their positions soon, and the President should ensure that their successors have enhanced missile defense for the 50th state among their top priorities.

Lt. Gen. Dan Leaf is a retired 3-star Air Force command pilot with more than 3,600 flight hours. He last served on active duty as Deputy Commander of the U.S. Pacific Command. He later returned to public service as the Director of the DoD’s Daniel K. Inouye Asia-Pacific Center for Security Studies. Leaf is a highly regarded national security expert and prize-winning author who currently works as the Managing Director of Phase Minus 1, a conflict resolution and security consulting company.