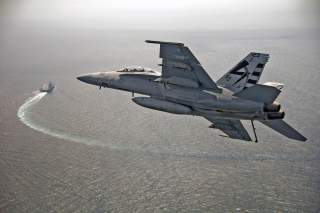 Huntington Ingalls Newport News shipbuilding has completed 50 percent of the structural work on the future USS John F. Kennedy (CVN-79), which is the second Ford-class aircraft carrier. If everything goes well, the massive 100,000-ton ship will be launched in 2020.

“We are 50 percent structurally complete, if you look in the dry dock you can make out kind of a whole bottom key area of ship, it’s looking like a ship now,” Mike Petters, president and chief executive officer of Huntington Ingalls Industries (HII) told investors.

“We will start building the skyline here before too long.”

Compared to first-in-class USS Gerald R. Ford (CVN-78), which was commissioned last month, Kennedy should cost less. HII has significantly reduced the number of man-hours needed on this second carrier.

“There is a pretty significant reduction of man-hours between Ford and Kennedy,” Petters said.

“It is bigger than anything we’ve ever seen before. We did take that reduction in the target.”

Petters explained that HII expects to reduce the man-hours on Kennedy because of the experience gained building Ford. That first ship was in some ways a prototype.

“The first ship of a class is a prototype,” Petters said.

The Ford-class design in now set—which mean a stable set of blueprints.

“As we went into Ford, we were operating for the first time. We were operating with a digital design and a 3D product model. But it was not complete when we started that ship,” Petters said.

HII has been trying to improve the processes on how to build the CVN-78-class since the first day Ford started construction. The company has incorporated those lessons on the second ship.

“So we think if there is a lot of that kind of prototype cost that can be shed between in terms of the labor and the man-hours that go to into the program.”

Right now, HII is taking cost reductions on Kennedy on faith. There is not much the company can really do to reduce risk on the vessel until 2020.

“I think Newport News is at the beginning of CVN-79,” Petters said.

“We go to launch that ship in 2020. So that’s really the first big major milestone on 79 that effects the way that we rationalize our risk registers.”

However, HII is confident enough about its cost reduction efforts that the company has agreed to accept a contract that codifies those cuts.

“We are beginning to really cutting the loose the man hours, now,” Petters said.

“We’ve got a lot of man-hours in front of us, but so far so good. We’re basically on track with our plan. And we’re very confident that we have – that we’re going to make a very, very significant labor cost reduction between Kennedy and Ford.”