America's Secret Plan to Track Down Russian and Chinese Submarines 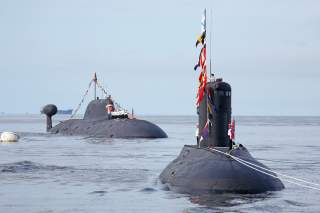 The U.S. Defense Advanced Research Projects Agency (DARPA) has awarded BAE Systems a $4.6 million contract for its Mobile Offboard Clandestine Communications and Approach (MOCCA) program. The MOCCA program’s goal is to enable submarines to detect other submerged vessels at greater distances, while minimizing the risk of counter-detection.

“Advances in maritime technology are critical to the Department of Defense and an area where the U.S. military can continue to strengthen its advantage,” Geoff Edelson, director of Maritime Systems and Technology at BAE Systems, said in a written statement.

“With the resurgence of near-peer competitors and an increasing number of submarines, MOCCA technology will provide Navy submariners with a vital asymmetrical advantage against a rapidly proliferating undersea threat.” Geoff Edelson, director of Maritime Systems and Technology at BAE Systems, said in a written statement.

DARPA’s Broad Agency Announcement for the program articulates several substantial technical challenges with the MOCCA effort, such as the difficulty of engineering a small drone with active sensor systems.

“A small UUV (Unmanned Undersea Vehicle) is disadvantaged as a host for an active sonar projector. The volume available for the projector is highly constrained which makes high-output transducer materials a necessity,” DARPA’s BAA to industry states.

DARPA also says the small drone also have energy challenges, explaining that “the projector must be as energy-efficient as possible.”

The Drone’s acoustic signal needs to be focused and directed, without scattering to produce “reverberation and signal loss.”

While details of what specific technologies might enable undersea signals are not available for security reasons, DARPA’s BAA does make clear that securing the communications link is also of utmost importance.

“An ideal link would have a low probability of intercept and of exploitation and provide high link reliability,” DARPA states.