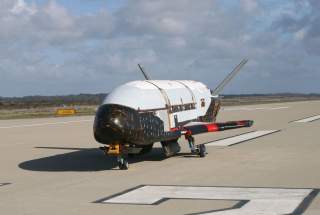 Since the Space Shuttle was retired in 2011, the US has lacked its own vehicle for launching astronauts. This hasn't stopped America from launching its own mini-shuttle without a crew.

The X-37B spacecraft is roughly the size of a small car. It has flown in space three times on classified missions. After roughly 22 months in space, it seems that the latest mission is preparing to come home.

What is this mysterious vehicle doing? Nobody really knows, and that's quite remarkable in these times. Legions of amateur analysts track classified satellite launches. They can usually work out the true nature of a mission by studying its orbit and assembling other pieces of evidence. Thus satellites that are designed to act as secretive eyes in the sky are normally unmasked quickly.

The X-37B is different. We know it is an experimental space plane that was originally owned by NASA before it was transferred to the US Air Force. We also suspect that there's something secret underneath the clamshell doors of its small payload bay. But we don't know exactly what it is or what it is doing. Open sources and technical analysis doesn't yield many clues. There has also been no 'leakage' of secrets through whispers and gossip.

There's obviously a lot of technical wizardry at work with this spacecraft, but the absolutely hermetic nature of the program is also remarkable. When so many secrets have been leaked in recent times, this is one program that remains steadfastly under wraps.