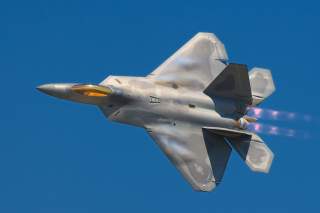 As part of the final hurdle, F-22 Raptors assigned to the 411th Flight Test Squadron launched inert AIM-9X Sidewinder and AIM-120D AMRAAM air intercept missiles against multiple BQM-167A sub-scale aerial targets on April 18 over the Utah Test and Training Range (UTTR). The test marks a “significant effort along the 3.2B developmental test and evaluation upgrade timeline” according to the Air Force.

“The shots at UTTR were the graduation live fire event of a two-year-long 3.2B upgrade,” Lt. Col. Randel Gordon, commander of the 411th FLTS, said. “The achievement of those shots is a huge technical accomplishment for the 412th Test Wing and 411th FLTS.”

The live missile shot was a particularly difficult and technically challenging event that was named after Chuck Norris, a 1980s-era action movie star. “We saved the best for last. This was the Chuck Norris shot,” Gordon said. “It was really a technically challenging shot and a graduation shot following two years of hard work. I’m deeply proud of those people in my squadron who made this happen.”

Increment 3.2B fixes that problem with the Common Weapon Employment Zone and adds the new AIM-9X Block 2. The upgrade also includes the latest AIM-120D version of the venerable AMRAAM—which offers 50 percent greater range than previous versions of the weapon. Together, the upgrade greatly boosts the Raptor’s air-to-air prowess.

Increment 3.2B is scheduled to enter operational testing in the fourth quarter of this fiscal year—theoretically this July and August. It should start to be fielded operationally with frontline squadrons late next year. The addition of the AIM-9X helps to address one of the Raptor’s few deficiencies—due to budget cuts in the late 1990s, the Air Force deferred AIM-9X integration and deleted the F-22’s planned helmet-mounted cuing system.

Full AIM-9X integration greatly enhances the Raptor’s already formidable within visual range dogfighting capabilities. Even without a helmet-mounted cuing system, the AIM-9X is far more capable than the antiquated AIM-9M. But to fully exploit the outer edges of the new high off-boresight capabilities of the new Sidewinder variants, the Raptor will need a helmet-mounted cuing system. Air Combat Command hopes to procure such a system for the Raptor that—if all goes well—should be fielded in the early 2020s.