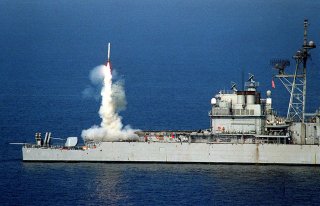 It’s no coincidence that the latest horrific chemical weapons attack in Syria by the Assad regime came within days of top Trump administration officials providing cover for Bashar al-Assad to remain in power. Last week the U.S. ambassador to the United Nations, Nikki Haley, said that when it comes to Syria, “our priority is no longer to sit there and focus on getting Assad out.” That expression of U.S. policy came the same day that Secretary of State Rex Tillerson intimated that Assad’s future would “be decided by the Syrian people.”

The Syrian people have tried to do precisely that since March 2011, but they were met by the regime’s snipers, tanks, aircraft, barrel bombs, chemical weapons, torture, mass graves and war crimes. Leaving Assad’s fate to the people matches the language espoused by Damascus, Tehran and Moscow, meaning Assad isn’t going anywhere.

With America’s Tomahawk missile strike in response, it may be too early to tell if President Trump’s objective is to punish the regime, prevent a repeated attack and degrade his military capabilities, alter the balance of power in the Syrian civil war or bring about the end of Bashar Assad's rule. Each option necessitates a different military strategy and would shift the priority list of potential targets inside Syria.

Secretary Tillerson had said “Russia and Iran will bear moral responsibility,” but later added that he knew Assad was behind the attack. However, in the words of White House Press Secretary Sean Spicer, “there is not a fundamental option of regime change.”

Unfortunately, the lesson is that this is what happens when the U.S. telegraphs that vicious dictators who use chemical weapons against their own people can remain in power. It sends a message to North Korea and Iran, one that will not be lost on Hezbollah in any upcoming conflict with Israel.

Despite the wishes of some in the West, Bashar al-Assad is not a solution for Syria, nor should he be a solution for the United States. The overwhelmingly compelling moral reasons for such a decision are manifest at this point. Going beyond humanitarian considerations, the fabric of Syrian society is irreparably torn. That social compact provided the modicum of legitimacy necessary for the thirty-year reign of Bashar’s father until his death in 2000. Without it, Bashar lacks the legitimacy to rule anything beyond his own family or the Kalbiyya tribe from which he hails. Indeed, having turned on the Sunni population who represent 75 percent of the county, Bashar now stands as a great magnet to which jihadists of all stripes are attracted, and that pull will continue as long as he is in power.

There’s also the problem of strength—a necessary trait in Middle East leaders. Bashar doesn’t have the military capability to regain, hold and consolidate control over Syria even if such an outcome were desirable. The case of the ancient city of Palmyra serves as an illustrative example. The city changed hands several times between pro-regime forces and ISIS since May 2015. Although Assad retook the territory with Russia's help in March 2016, the duo was unable to hold it while engaged in their December assault against Aleppo. Only after Aleppo fell were pro-Assad forces able to retake Palmyra in early March 2017.

Assad, who is currently conscripting old men and underage women to serve in his military, is wholly reliant on outside powers with interests directly opposed to those of the United States. In early 2013, the first critical moment came when Assad risked losing what was left of his power but Iran and Hezbollah intervened, bolstering the regime. The respite they provided proved to be temporary and their resources inadequate to the ultimate resolution of the conflict. Assad was once again on the ropes by September 2015, but was revived by Russia’s entry into the conflict. Even their considerable military assistance wasn’t enough to win decisively.

The fact that Assad and his backers have resorted to the repeated use of chemical weapons and the continuous targeting of hospitals and schools demonstrates the weakness of their combined conventional military strength.

Simply put, to advocate for Bashar to remain in power is to acquiesce in Russia president Vladimir Putin’s role as Syria’s kingmaker. His purpose in Syria is to keep Assad in power, provide security for its Iranian client and increase the Russian threat to NATO’s southern flank by upgrading and expanding its Mediterranean base in Tartus, making its presence a permanent feature in the Middle East.

Working to boost Assad also means strengthening Iran in their long pursued and nearly completed task of creating a Shia land corridor from Tehran to the Mediterranean Sea, running through Iraq and Syria. Far from President Trump’s promise to push back against Iran, it will greatly add to their corrosive power before the key provisions of the nuclear deal fall away, greatly enhancing their position in the coming years.

One hundred years ago this month America entered World War I, and chlorine gas was one of the first chemical weapons to be used. It was banned as an agent of warfare by the Chemical Weapons Convention treaty, which Syria signed in 2013 as part of a deal with Russia to acknowledge and relinquish its stocks of Sarin, VX and mustard gas. The world has not tolerated the use of chemical weapons for nearly a century. In fact, the United States established no-fly zones over Iraq for years to ensure Saddam Hussein couldn’t once again use them against his people.

Sending Bashar al-Assad a military message that there are certain levels of barbarity that the world will not tolerate is a beginning. But ultimately, he needs to pay the price for his actions in a manner that will resonate loudest among the rogue regimes of the world that would consider the use of weapons of mass destruction. That will mean ensuring that the ruling Assad dynasty comes to an end in Syria.