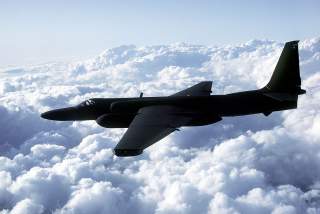 U-2 spy planes are still flying across the world sixty years after they entered CIA service. Few aircraft can claim to have had such an impact on world history—not only because the information they obtained influenced U.S. foreign policy, but also because the high-flying plane proved not to be as untouchable as hoped.

Churchill famously stated that the Soviet Union had built an “iron curtain” in Eastern Europe—and U.S. spies were literally dying to take a peek behind it. Photo reconnaissance aircraft were a proven and effective means of gathering intel, but Soviet jet fighters guided by radar made deep penetration of Soviet air space suicidal.

How could spy planes avoid Soviet MiG fighters, which would eventually be supplemented by early surface-to-air missiles? The U.S. Air Force figured that flying at extremely high altitude might do the trick—and possibly even make radar detection impossible, as the Soviet Union’s early radars, donated by the United States during World War II, were thought to have a maximum detection altitude of sixty-seven thousand feet. Twenty specialized high-altitude RB-57Ds were converted to do the job, but they still couldn’t fly quite high enough.

In 1953, Lockheed’s legendary designer Kelly Johnson proposed the CL-282 spy plane to the Air Force, a design that was as much a glider as an airplane, with a long fuselage and enormous wings. The CL-282 was so stripped down it even lacked its own landing gear, and would have had to land on its belly. The Air Force walked out on the concept, but the CIA was intrigued and told Lockheed to do more work on the idea.

Lockheed developed what would become the U-2 under conditions of absolute secrecy. The plane was designated with “U” for Utility, usually reserved for light transports, in order to disguise the plane’s purpose as a reconnaissance plane. Lockheed claimed to subcontractors that it was designing a high-altitude weather plane.

President Dwight Eisenhower became personally involved in the plane’s operation, persuaded by arguments that it would politically dangerous to send military personnel on overflights of the Soviet Union. After first trying to operate the U-2 solely with non-U.S. citizens, the CIA ultimately settled for decommissioning Air Force pilots and entering them into CIA service as “drivers.” The joint CIA–Air Force project was code-named “Dragon Lady”, an appellation which stuck.

The airplane that Lockheed produced had a long, thin fuselage and enormous eighty-foot wings to enable it to fly as high as seventy-two thousand feet. The space-like conditions at such altitudes required pilots to wear a partial-pressure suit. The stress from the high air pressured typically caused pilots to lose six pounds of body weight on an eight-hour mission, despite liquidized meals available through a tube connected to the helmet.

The U-2’s payload was a camera with 180-inch focal length lenses which could take high-resolution photos of the ground tens of thousands of feet below. This was soon supplemented by signals-intelligence gathering equipment.

Unlike the CL-282, the U-2 did have a landing gear under the nose and tail—and used two “pogo” wheels that were discarded during takeoff. The extraordinary lift provided by the U-2’s wings made it extremely difficult to land, a problem worsened by the poor visibility from the cockpit, requiring a chase car to drive alongside landing U-2s to radio corrections. On the upside, the combination of altitude and lift allowed the U-2 to glide very long distances—one U-2 that experienced an engine failure was able to glide three hundred miles to land at a base in New Mexico.

Over sixty years, only 950 pilots have been certified to fly the finicky plane, including nine female pilots. The show MythBusters did a segment on whether the U-2 was “the most difficult aircraft to fly”—you can check out this clip to see the discarding take off wheels, pressure suit and high altitude flight, and see the landing with the chase car here.

Despite Eisenhower’s fears that overflights could trigger war, U-2s of CIA Detachment A stationed in Wiesbaden, Germany embarked on the type’s first spy mission over Eastern Europe on June 20, 1956, followed by the first overflight of the Soviet Union on July 4.

Any hopes that Soviet radars would be unable to track the U-2 were swiftly dispelled—but the MiG-15 and -17 fighters sent to intercept the U-2s simply couldn’t climb high enough! The United States went on to lend U-2s for operation by British Royal Air Force pilots, both as a form of repayment for using bases in the UK as well as to increase the volume of incoming intelligence.

The CIA also launched Project Rainbow to upgrade the U-2 into a stealth plane with a low radar cross section. However, it proved unsuccessful, leading to Lockheed proceeding with the A-12 program, which would produce the SR-71 Blackbird.

The photographic intelligence gathered by U-2s quickly proved its value. At the time, military leaders in the United States were fretting over a supposed “bomber gap” with the Soviet Union. U-2 overflights helped establish that new long-range M-4 strategic bombers had not been deployed to any forward bases. U-2 intelligence over the Middle East also helped the United States monitor the British and French military operations during the Suez Crisis, the evidence of which was used to pressure the United Kingdom into aborting the intervention.

Nonetheless, Eisenhower knew the U-2s flights were risky, and he repeatedly cancelled and then reauthorized them over the course of his second term as president. By the end of the decade, the Soviet Union began to greater numbers of surface-to-air missiles, which the CIA was aware were capable of flying high enough to shoot down a U-2. However, by then the Pentagon was freaking out over a supposed “missile gap” created by intercontinental ballistic missiles that Soviet premier Khrushchev had bragged about, and Eisenhower authorized a new series of missions to determine the extent of the threat.

Fatefully, the last mission was delayed to May Day, 1960, a holiday in the Soviet Union, which cleared the skies of commercial traffic that might have delayed detection time. The U-2 flown by CIA pilot Gary Powers out of Incirlik Air Base, in Turkey, was immediately acquired on Soviet radars and a total of three SA-2 missiles were launched. One struck a Russian MiG-19 attempting to intercept Powers’s plane, killing the pilot, while another failed to hit. The third exploded close by. Powers successfully bailed out, and his plane crashed relatively intact.

The CIA had prepared a cover story In the event of a loss that the U-2 was a high-altitude weather reconnaissance plane that had “gotten lost.” The USSR allowed Eisenhower to offer this excuse for an entire week before revealing they had captured Gary Powers, humiliating Eisenhower and causing the May 16 Paris Summit to crash in flames. Powers’s capture came as shock to the CIA, which had always been confident that no pilot would survive being shot down at the high altitudes at which a U-2 flew. In the end, Powers was exchanged for Soviet spies, and the U-2 overflights of Russia came to an end.

Nonetheless, Lockheed continued to improve its design. U-2As and U-2Cs were upgraded into air-refueling capable U-2Es and U-2Fs respectively, increasing their effective range from 4,600 to 9,200 miles. The United States also experimented with operating specialized U-2Gs and U-2Hs off aircraft carriers to lessen the reliance on foreign bases. Although successful carrier takeoffs were performed, no actual spy missions are believed to have been flown off Navy ships.

While overseas U-2 detachments were withdrawn after the Powers incident, they soon were flying over Cuba instead. On October 14, 1962, a U-2 flown by Maj. Richard Heyser photographed Soviet medium-range ballistic-missile installations in Cuba—the evidence of which triggered the Cuban Missile Crisis. Once again, the U-2 was a pivotal actor in U.S.-Soviet relations. The overflights continued during the confrontation, and on October 27, the U-2 flown by Maj. Rudolf Anderson was shot down by another SA-2 missile, killing the pilot.

The Air Force gradually assumed control of most CIA U-2 units after the Anderson shoot-down, redesignating them Strategic Reconnaissance Squadrons. Over the following decade, they were dispatched to bases in Thailand, Japan, the Philippines and even India, photographing North Vietnamese defensive installations, North Korean and Indonesian troop movements, and Chinese border fortifications. They would also range over the Middle East, keeping an eye on developments in the Arab-Israeli conflict.