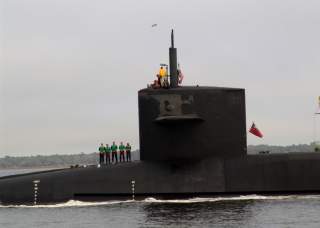 The U.S. Navy celebrated its 240th birthday last month, but behind the festivities service officials are growing increasingly worried that one of the nation’s most important military systems— nuclear ballistic submarines (SSBNs)—will fall victim to Congressional budgetary infighting.

The current Ohio-class submarines are slated to begin retiring in the 2020s, and their replacement, the SSBN(X), will begin construction in just six years. Unfortunately the Navy faces a tight budgetary environment while it tries to secure funding for the new submarines along with other projects—all while under the tightest of budgets.

In light of the budget situation, the Navy is facing criticism for its decision to procure twelve new SSBNs to replace the fourteen existing Ohio-class submarines. Skeptics of the plan say that the new subs will be unaffordable and that procurement should be cut from twelve to eight. They claim these reductions can be made with no ill-effect on U.S. nuclear deterrence capabilities.

What budget hawks and nuclear disarmament advocates fail to recognize, however, is that these new submarines are expected to be in service until the 2080s, about sixty-five years from now. Notice anything different about the world of 1950 compared to the present? Just about everything. Sixty-five years is practically an eternity when it comes to predicting the international security environment; so it seems supremely unwise to cut one of the most resilient and versatile systems the military will have on a hunch U.S. power will not be severely tested in the future.

Let’s face it, even America’s best and brightest cannot predict the future with any certainty. The Director of National Intelligence did not foresee the Ukrainian government’s dissolution or Russia’s incursion into Crimea. A November 2013 poll of over 1,200 government and non-government foreign policy “experts” did not rank Russian aggression in the top 30 threats for the following year. Within the past three years, experts have claimed, “The risk of nuclear confrontation between the United States and either Russia or China belongs to the past, not the future…,” while others assured us that today, “fewer states have revisionist territorial agendas, let alone the capability to act on them.”

The security environment can change much faster than our shipyard workers can build submarines. Cutting the number of nuclear submarines the United States procures now will only deny future presidents capabilities and options they may need to deter aggression in a crisis.

As then Rear Adm. Richard Breckenridge, the Navy’s Director for Undersea Warfare, explained, “The nuclear trajectory of the international community is in grave doubt, and there is every indication that U.S. deterrence will play an increasing – not decreasing role in the future. This occurs even as we reduce our SSBN-loaded missiles from more than 240 today to 160 when the last Ohio retires. There is already risk in this projection; there is no need to introduce more.”

Navy officials have consistently argued that in order to maintain U.S. nuclear deterrence requirements now and in the future, ten SSBNs must be available at all times, usually while two are in port undergoing maintenance. Cutting the nuclear submarine force down to eight would reportedly make it impossible to cover all the needed areas around the world in times of peace or during a crisis.

Nuclear disarmament advocates will counter that even if twelve Ohio-class replacement submarines is the desired number, the defense budget will simply not allow further increases. Yet there is solid evidence this is not the case. A new report from the Center for Strategic and Budgetary Assessments shows that even during the peak funding years in the mid-2020s, the entire nuclear modernization program—not just SSBNs—will account for under five percent of the total defense budget (up from about two percent currently). Budgets are made according to priorities, and Navy officials have said Ohio replacement is their top funding priority. Looking for budgetary savings in such a relatively small but enormously important part of the defense budget is both futile and dangerous. As David Mosher pointed out in 2001, this practice continues to be “the hunt for small potatoes.”

As Russia embarks on an ambitious nuclear modernization program and China looks to contest international waterways by building new islands, now is not the time to unilaterally reduce further our nation’s most powerful deterrent tools. The threats above the water are constantly evolving, so it is only prudent to ensure our nuclear force below the waves is ever-present and ever-ready.

Matthew R. Costlow is a Defense Policy Analyst at the National Institute for Public Policy in Fairfax, VA. His research focuses on nuclear deterrence and assurance, arms control, nonproliferation, Russian and Chinese defense strategy, and nuclear terrorism. His work has previously appeared in Defense News, The National Interest, TheHill.com, and RealClearDefense.com.