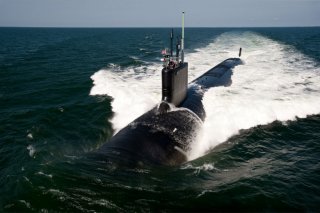 Every once in a while, something appears in open sources that lets you know there's a lot more going on with the Navy's fleet of attack submarines than the sea service publicly discloses.  A case in point: on July 29 Brian Fung and Andrea Peterson of the Washington Post produced an article about how U.S. subs are being used to hack the undersea cables of other countries.  The story reported that the Navy conducts hundreds of "computer network exploitations" every week.

Some of these exploits are probably accomplished using mast-mounted antennas on subs rather than cable intercepts, because atmospheric conditions along coastlines often bend radio signals so they can be collected and analyzed hundreds of miles from their point of origin.  Either way, the inherent stealth of submarines permits intelligence-gathering near places like North Korea and Russia that would not be feasible using satellites or aircraft.

When you combine that with the better-known ability of attack submarines to monitor the movement of hostile warships on the ocean's surface and beneath the seas, it is clear that they are uniquely valuable reconnaissance assets.  And that's not all -- they also are equipped to conduct anti-submarine and anti-surface warfare; to defeat or deploy mines in maritime chokepoints; to conduct strikes against targets ashore; and to insert or recover special operations forces.  So their covertness enables remarkable versatility in peacetime and wartime.

However, a crisis is fast approaching for the undersea fleet, because lagging modernization of naval assets is conspiring to drive the number of attack subs far below the minimum number the Navy says it must have to meet the requirements of national strategy.  First, submarines built during the Cold War at a rate of three per year are now retiring at the same rate, while new subs to replace them are only being built at the rate of two per year.  Second, the current two-per-year build rate is programmed to fall to only one-per-year when construction of new ballistic missile subs commences in the next decade.

As if that were not enough, four converted ballistic missile subs hosting most of the undersea fleet's land-attack missiles must retire in the same timeframe. The Navy has a plan for tripling the number of cruise missiles on each of its new attack subs beginning in 2019, but that won't address the impending shortfall in land-attack capability if the number of attack subs built falls to one every year a ballistic missile sub is scheduled to commence construction.  The Navy needs a dozen new ballistic missile boats to preserve its part of the nuclear deterrent, and that implies a lot of missing attack subs.

So here's the bottom line.  If the Navy sticks with its plan of record for building the current Virginia class of attack submarines, the number of attack subs in the fleet will fall from 52 today to 48 in 2022, and then drift downward to a low of 41 at the end of the next decade.  The number begins to rise thereafter, but it doesn't get back to 48 on a sustained basis until 2042 -- and according to the Navy's most recent shipbuilding plan, 48 attack subs is the minimum number necessary "to fulfill the Navy's essential combat missions at an acceptable level of risk."

In truth, the Navy is already having difficulty meeting demand for attack subs at a force level of 52, because it gets numerous intelligence taskings from national agencies.  Most of the world's major trouble spots from the Levant to the Persian Gulf to the South China Sea are well-suited to leveraging the unique capabilities of nuclear-powered submarines, but the undersea fleet is stretched thin.  Many subs are not in position to deal with emergent threats on any given day due to training missions, maintenance needs and transit times.

Fortunately, there have been no major problems with producing the Virginia class.  The last eight boats have been delivered ahead of schedule and within budgets.  The head of U.S. Pacific Command says Virginia-class subs are "the best thing we have" -- but then goes on to observe "I can't get enough of them fast enough."  Steps must be taken to correct this problem as legacy submarines retire, because attack subs are the one type of warship that can operate in close proximity to the most capable adversaries without their survival being placed at great risk.

There's only one solution to the impending shortfall, and that's to continue building Virginia-class boats at the rate of two per year, even in the years when ballistic missile subs are also scheduled to be funded.  The Navy can't delay replacing its aging Ohio-class ballistic missile subs because they are the most secure part of the nuclear triad, and secure retaliatory capability is the key to effective nuclear deterrence.  But reducing the Virginia buy to one boat in each of the twelve years a new "boomer" is bought creates vulnerability elsewhere in the force.

The budgetary logic of sticking with two attack subs per year is obvious: due to economies of scale, the Navy saves $250 million on each sub if it buys two in a year rather than one.  And the increased burden on the federal budget is negligible -- about six hours of federal spending per year.  So rather than committing to a shipbuilding plan that we already know will leave the joint force vulnerable in future years, Congress and the Navy should bite the bullet on building two Virginia-class attack subs per year throughout the next decade -- even as recapitalization of the sea-based nuclear deterrent proceeds.