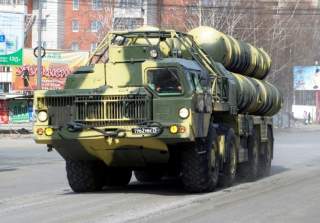 Moscow may have deployed the powerful S-300 surface-to-air missile system to Syria according to some media reports. However, the reports are unconfirmed—Russian military officials have not specified what kind of missiles they are deploying—or if indeed they are adding to their forces in the region.

“We have studied all the possible threats. We sent there not only fighter jets, attack aircraft, bomber aircraft, helicopters but also missile systems. As various force majeure circumstances may occur,” said Russian air force chief Col. Gen. Viktor Bondarev in an interview with the Komsomolskaya Pravda newspaper published on Thursday according to TASS. It’s not clear if Bondarev is referring to additional weapons or the handful of Pantsir-S1 point defense missiles Russia has already deployed to Syria.

If the Russian military has deployed a version of the Almaz-Antey S-300 series, it would massively complicate air operations for U.S. and allied forces. Almaz-Antey currently builds two versions of the weapon system according to its product catalogue—the S-300PMU2 and the S-300VM, also referred to as the Antey-2500. Both have a range of more than 120 miles and can hit targets as high as 100,000ft. The weapons can engage half-a-dozen or more target simultaneously.

If the Russians have deployed the S-300—or worse—the far more capable S-400 strategic surface-to-air missile defense system to Syria, it could effectively render entire swaths of Syria into de facto no-fly zones for U.S. and allied aircraft. Only the U.S. Air Force’s Lockheed Martin F-22 Raptor or the Northrop Grumman B-2 Spirit stealth bomber would be able to operate inside areas protected by those weapons.

But even those aircraft could be challenged if there were enough S-300 batteries operating as part of an integrated air defense network. The exact number and location of the S-300s would make a huge difference. The problem is further compounded by the fact that the S-300 system is mobile—and can move at a moment’s notice. “If they’re all over every square inch of the country, then it doesn’t matter what you put out there—it’s going to be a challenge,” a senior Air Force official with extensive stealth experience told me earlier in the year.

Theoretically, the newly operational Lockheed Martin F-35 Joint Strike Fighter should also be able to operate against these late-generation Russian strategic surface-to-air missile systems—at least that’s what the Pentagon has been saying. “It did exceedingly well in that it could penetrate airspace that other airplanes couldn’t, and it could use electronic warfare to defeat adversaries and defeat surface-to-air capability while at the same time protecting its own sensor suite,” said Air Force Gen. Herbert "Hawk" Carlisle at the Air Force Association’s 2015 Air and Space Conference.

The F-35B is now operational with the U.S. Marine Corps. If Russia is willing to send in its newest toys into the fight, should America not follow suit?