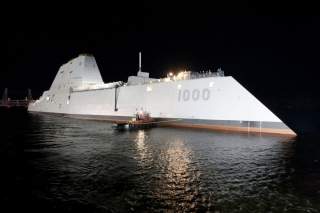 The U.S. Navy’s first DDG-1000 destroyer Zumwalt (Note; It’s not USS until the ship is commissioned) is set to undergo an initial set of sea trials in December.

The ship is one of three DDG-1000-class vessels the service is buying—which effectively means that the ships are glorified technology demonstrators for the various high-tech innovations found onboard.

“We’ve got a builder’s sea trial with a notional start of the 7th of December,” said Sean Stackley, assistant secretary of the Navy for research, development and acquisition in an interview with Defense News. “That is the critical milestone in terms of being able to deliver in the spring. We need a successful trial. We’ll learn things from the trial, we always do. First-of-class, we expect to learn a lot.”

The roughly 15,700-ton vessel has been years in the works and features a host of new technologies including an Integrated Power System—which generates 100 percent of the electricity needed for each vessel's propulsion, electronics and weapons. According to Raytheon—one of the key subcontractors—the system provides 58 MW of reserved power while “steaming” at 20 knots.

Advanced Induction Motors (AIM) provide the actual propulsion for the ship using electromagnets to turn the drive shaft. The ship was originally expected to use much more capable and compact permanent magnet motors—but the development program failed to deliver. The next application for such technology is the Ohio Replacement Program ballistic missile submarine.

The Zumwalts also feature a “Total Ship Computing Environment” which is a single, encrypted network that controls all shipboard computing applications for everything from machinery controls to the radars and weapon systems. It also has a pair of 155 mm guns capable of firing long-range projectiles that can strike a target from a distance of sixty-three nautical miles and eighty missile tubes. Those tubes carry the standard variety of naval missiles including the Standard and Tomahawk.

”Everything is new,” Stackley told Defense News. “From the propulsion plant, the power distribution – the whole integrated power system – the extraordinarily unique features of the hull form that provide the degree of stealth and survivability, the radar system, the degree of automation that’s incorporated into the ship to enable the reduced-size crew – it’s all new.”

While the ship is set for sea-trials, she won’t be ready for war even after the vessel is delivered. Instead, mission systems will be installed later in California once the ship is transferred to San Diego. Bath Iron Works—which builds the ship in Maine—is only responsible for the ship’s hull, mechanical and electrical system. The mission systems—which include the ship’s combat systems, radars and other sensors—are Raytheon and BAE Systems’ responsibility.  “This two-phased delivery approach has been in place since the contract was first struck,” Stackley said.

The Navy plans to build only three DDG-1000s. Originally, it had planned to build thirty-two ships. That was later reduced to twelve and later to just three. The Navy simply couldn’t afford the ship’s astronomical price tag—each vessel costs roughly $4 billion not including research and development. Total program costs are near $23 billion.

Additionally, the DDG-1000 design is not particularly well suited for the ballistic missile defense role. The ship relies on the AN/SPY-3 X-band active electronically scanned array radar—which can provide guidance for the SM-2 and the Evolved Sea Sparrow, but it can’t provide area air defenses because it lacks volume search capability. Originally, the ship was supposed to have an S-band radar as part of an integrated dual-band system called the SPY-4—but that ran into technical trouble and cost issues. It was removed in 2010. The Zumwalts also need a slightly modified version of the Standard missile to be compatible with the vessel’s fire-control system—which is a logistical problem.

The dual-band radar was superseded by the Gallium Nitride-based technology, which will be used on the Flight III DDG-51’s Air and Missile Defense Radar. Because of the growing ballistic missile threat, the Navy has opted to build Flight III DDG-51s instead of more DDG-1000s. But the DDG-1000’s technology will live on and will likely be used on a new Future Surface Combatant.