Are America and China Destined for War? 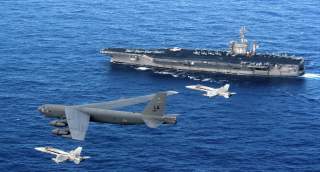 In his recent book The Improbable War, professor Christopher Coker explains that it is “of vital importance that the possibility of a conflict between China and the United States continues to be discussed.” Coker’s rationale for this is simple: “If the United States and China continue to convince themselves that war is too ‘improbable’ to take seriously, it is not they but the rest of the world that may ultimately pay the price.”

It would seem the good professor’s wish is about to be granted. We are about to be treated to what surely will be a media blitz over what can only be described as the most comprehensive book to ever tackle the question of not only whether a US-China war is possible, but what steps Washington and Beijing can take to avoid such a calamity.

Written by one of the world’s most prominent political scientists and strategic thinkers of the day, director of Harvard University’s Belfer Center, Graham Allison, anyone who has been following China in recent years likely guessed such an effort was in the works. The book is hooked on Allison’s popular “Thucydides Trap” concept. The trap, as Allison described in a prominent piece for the Atlantic in 2015, is “the attendant dangers when a rising power rivals a ruling power — as Athens challenged Sparta in ancient Greece, or as Germany did Britain a century ago.” Allison goes on to warn that in 12 of 16 cases he has studied throughout history, when such a situation takes place, war has been the result.

US and China: A relationship in dangerous flux:

So what happens in case study number 17? Knowing the odds history has given us, is war between China and America unstoppable?

The first, is the economic relationship. At least until the election of Donald Trump, many scholars and Asia hands would argue that both sides prospered from their deep economic ties. US-China bilateral trade in goods and services has skyrocketed since the two nation’s opened their doors to each other in 1971 and is now more than US$600 billion per year. Trade between both Washington and Beijing has made both countries wealthier with millions of jobs created on both sides of the Pacific.

The second part is the strategic relationship — something that was bound to become strained after the collapse of the Soviet Union, the real threat that brought America and China together. Without a common foe, tensions on both sides have begun to grow. Washington and Beijing now face off in various parts of the Asia-Pacific with no letup in sight.

Such an odd, dual-sided relationship, filled with equal promise and peril, made sense for decades. When times got tough — look no further than the 1995-1996 Taiwan Crisis, the 1999 Chinese Embassy bombing, the 2001 EP-3 Crisis and many other smaller incidents — the dangers of severing the economic relationship always seemed to smooth out any talk of a rupture. But with Trump and advisers such as Death by China author Peter Navarro calling into question the economic benefits of trade with Beijing, the one thing that always seemed to anchor relations in times of trouble seems to be at an end.

Why Destined for War is a must read:

To be fair, there are many great articles, long-form pieces and books that detail the dangers of a US-China military clash and how to avoid it. So why read this one?

In the interests of full disclosure, I have published Allison’s works on many occasions as Executive Editor of the National Interest, but Allison’s efforts in Destined for War will surely be praised, and for good reasons.

Any Asia hand will quickly be floored by the level of detail and research the manuscript includes. With a grounding in history, Allison takes his readers on a journey through many similar cases in the past where a rising nation challenged a status-quo power, detailing where things went wrong, and, in some instances, how war was avoided. This is all done in a style that makes the book a real page turner, written in a prose that is easy to understand, never getting bogged down in often pointless jargon, tables, graphs or pie-charts. Allison’s ideas flow easily, no matter how frightening they are.

But some will likely have a problem with some of what the work offers. For example, he compares Xi Jinping and Donald Trump as two men who have similar goals: to make their nations great again. At the same time, Allison boldly, and quite correctly, couches China’s quest for primacy in Asia as something like what the United States did when it rose to power almost a century ago. While clearly stating that China has not acted as aggressively as America did in the past, especially back around the turn of century during the time of President Theodore Roosevelt, Allison skillfully hints at what could occur if China were to take such a step — and embark on a real path to war.

While I don’t want to offer any spoilers, Allison offers four key ways to mitigate the possibility of conflict. One of my favorites, clarifying vital interests, is worth spoiling. What are America’s vital interests in the Asia-Pacific region? What are we willing to fight for? What are we willing to die for? And, perhaps, most importantly, what are we not willing to fight for? To this day, I would challenge any past Obama administration official to be able to explain that with clarity — they likely can’t, beyond mentioning the word pivot or rebalance — terms that are rightly relegated to the past. The Trump administration will need to take up this challenge fast, considering Xi and Obama have a big summit set for early next month.

While many will sing the praises of Allison’s work, there is a much simpler reason why the good professor’s effort should be commended: it stands to reason a flood of op-eds, blogs, editorials and podcasts will flood the media as this books nears its release. We are finally about to have a real public debate about the very distinct possibility of a war between the US and China — and that itself might be the real accomplishment.