Are Americans Overreacting to the Ebola Virus? 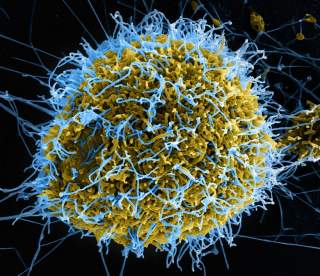 Compared with the havoc wreaked by the Ebola epidemic in West Africa, the virus thus far has only led to three confirmed cases in the United States. The fear and anxiety however has spread much faster. Earlier this month, seventy-five airplane-cabin cleaners at LaGuardia Airport walked off their jobs partly due to concerns about the risk of exposure to the virus. Last week, a woman who vomitted in the Pentagon parking lot triggered a health scare that forced the temporary shutdown of the building entrance and the setup of a quarantine and decontamination tent in front of the hospital where she was admitted—and later found not to have Ebola. Also last week, a Texas health worker who was suspected of being exposed to the first Ebola case in the United States was isolated on a cruise ship for nineteen days despite showing no symptoms of the disease. Ultimately, her blood test came back negative. In a bizarre move, parents pulled their kids out of a Mississippi school because of a concern that the principal who recently visited Zambia (which is 3,000 miles away from the affected West African countries) might spread the virus. U.S. President Barack Obama spoke against the “hysteria or fear” associated with the virus, and yet indicated his willingness to implement a travel ban from Africa and appoint an anti-Ebola czar.

The American response to the looming Ebola outbreak is reminiscent of the Chinese response to the 2003 SARS outbreak. In the Chinese case, amidst the governmental information clampdown and a fatal period of hesitation, there was widespread speculation and rumor-mongering. Residents in Guangdong province (the SARS ground zero) cleared pharmacy shelves of antibiotics and flu medication. In some cities, even vinegar, believed to be a disinfectant, was sold out. The panic spread quickly to other provinces. Farmers set off firecrackers in the belief that it would frighten off SARS. At the height of the epidemic in Beijing, a sea of people in white masks—most of them scared migrant workers and university students—flocked to train and bus stations and airports in an effort to flee the city. By late April, an estimated one million people (around 10 percent of the population), had fled the city for other parts of China. They would soon find themselves persona non grata even in their hometowns. In the countryside, worried villagers set up roadblocks to keep away people from Beijing. A series of riots against quarantine centers were also reported in May.

But Ebola is not SARS. For one thing, Ebola is not as contagious as SARS. The average number of people that a sick person will infect is one to two for Ebola, compared to two to five for SARS. While SARS can spread through infected droplets, Ebola is transmitted only through direct contact with the blood or bodily fluids of someone who is sick. Unlike SARS, which enables an asymptomatic person to transmit the virus, Ebola only becomes contagious when infected people are experiencing symptoms. These key differences increase the possibility of effectively implementing restrictive interventions such as social distancing, travel restrictions, quarantine, and case isolation for Ebola.

That being said, Ebola is more virulent than SARS. The average case fatality rate for Ebola is around 50 percent, much higher than SARS (9.6 percent). Ebola was first reported as early as 1976 but, as my colleague Laurie Garrett noted, there are still myths surrounding the virus, including its very nature, the risk it poses, and the effective means of preventing transmission. A new study released last week suggests that Ebola patients could still be contagious after three-week quarantine (the period recommended by the World Health Organization). The mishandling of the Ebola crisis by the U.S. Center for Disease Control (which has been consistently ranked the most trusted federal agency) further erodes public confidence in the U.S. disease surveillance and response capacity. Indeed, the widespread witnessing of healthcare workers who were unable to protect themselves from infection perpetuated a highly exaggerated sense of public risk. In the words of Jessica Stern, an expert on terrorism and weapons of mass destruction at Harvard University, when dealing with an unfamiliar disease, “We respond to the likelihood of death in the event the disease is contracted, rather than the compound probability of contracting the disease and succumbing to its effects.”

Such “dreaded risks” generate fear and panic at a level that is disproportionate to the disease-caused morbidity and mortality. Indeed, major epidemics have historically produced significant worry, anxiety, fear, panic, and even mass hysteria in the affected countries. The fear and panic could place further constraints on government capacity to tackle the public health emergency. Worse, the associated social distancing measures, in conjunction with the government anti-Ebola interventions, could have substantial negative economic impacts in the United States. It is estimated that adverse demand shock caused by SARS cost China 0.5 percent of its GDP in 2003. Americans may be overreacting to the threat of Ebola, but that overreaction is understandable. When planning further Ebola control measures, the Obama administration has to seriously take this fear factor into account.