Are China and the Philippines Agreeing to Share the South China Sea? 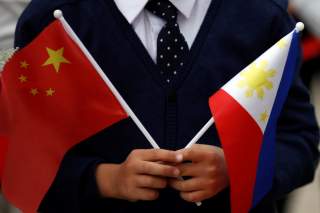 China and the Philippines are now considering a series of resource-sharing agreements in the South China Sea, the latest development in a diplomatic warming trend that has reset the disputed maritime area’s strategic calculus.

The initiative was made public during the late March visit of Philippine Foreign Secretary Alan Peter Cayetano to Beijing, where he echoed President Rodrigo Duterte in hailing a “golden period” in Philippine-China relations.

The chief Filipino diplomat reiterated his country’s interest in ensuring the “South China Sea disputes will no longer block the development of bilateral ties” but rather “will be turned into a source of friendship and cooperation between our two countries.”

The two neighbors agreed to pursue “offshore oil and gas exploration” schemes based on a “suitable legal framework”, which will be mutually beneficial and apparently skirt intractable sovereignty issues over contested features.

Chinese Foreign Minister Wang Yi reassured both sides that any resource-sharing agreement in the resource-rich area will be explored and conducted in “a prudent and steady way” to ensure its viability and success.

The Philippines is desperate to develop alternative domestic sources of energy, while China is eager to legitimize its wider-reaching claim over the South China Sea, as defined in its notorious nine-dash line map.

China’s Foreign Ministry’s Institute of International Studies, a think tank, has estimated there could be as much as 293 to 344 billion barrels of oil (BBL) and 30 to 72 trillion cubic meters (TCM) of natural gas in the maritime area.

The US Energy Information Administration, in contrast, estimates the maritime area holds between 16 to 33 BBL of oil and seven to 14 TCM of natural gas.

Either way, the potential for an oil and gas bonanza is contributing to escalating tensions in the crucial waterway, through which US$5 trillion of trade flows every year.

It isn’t the first time that the two neighbors have sought to split the difference rather than tussle over contested South China Sea resources.

A previous attempt was made during the Gloria Macapagal Arroyo (2001) administration, whereby the Philippines and China, along with Vietnam, explored the possibility of a Joint Development Agreement (JDA) in overlapping claimed areas.

In turn, Petrovietnam and the Philippine National Oil Company (PNOC), both state energy enterprises, were tasked with processing and interpreting the data derived from CNOOC’s survey.

The aim was to generate sufficient trust and confidence before proceeding with extraction and sharing of actual resources in the area. In 2002, China and Vietnam negotiated a maritime delimitation agreement in the Gulf on Tonkin as a potential prelude for a JDA in that contested area.

This was all seen at the time as a prelude to cooperation in more sensitive geographical areas, namely the energy-rich waters off the coast of Vietnam and close to the China-occupied Paracel group of islands. Yet both the Gulf of Tonkin agreement and JMSU either failed to materialize or were hobbled by controversy.

Various civil society groups in the Philippines challenged the JMSU as unconstitutional, raising concerns over secrecy clauses as well as the scope of agreement.

For some, the Arroyo’s administration sold out sovereign interests in the South China Sea, notably at a time her husband was embroiled in a broadband infrastructure project scandal involving China’s ZTE Corporation.

At the same time, Hanoi maintains that Beijing has not stuck to its side of the bargain in the Gulf of Tonkin agreement.

A similar JDA scheme announced in 2008 between China and Japan to make the East China Sea an area of “peace, cooperation and friendship” suffered a similar breakdown in 2013 due to China’s building of structures in contested areas.

This time, however, China apparently aims to get it right with the Philippines, a traditional US ally that has shifted dramatically towards China under Duterte.

“We want to make sure that our bilateral relations aren’t defined by the disputes but instead by areas of common interest,” Philippine ambassador to China Jose Santiago Sta Romana told this author in Beijing.

JDAs, the Filipino diplomat explained, are one way of making sure the two neighbors establish a sustainable modus vivendi in the South China Sea. So far, however, it’s far from clear what the two countries specifically have in mind.

In theory, any resource-sharing agreement should be consistent with both countries’ national as well as the 2016 international tribunal ruling at The Hague, which nullified much of China’s nine-dash line map claims to areas Manila views as its own.

The Philippine constitution bars any JDA with a foreign entity that refuses to acknowledge the country’s sovereignty within its Exclusive Economic Zone (EEZ).

According to the 2016 arbitral award ruling, the Philippines and China have no overlapping EEZs, thus it’s not clear what would be the legal basis for a fair and legitimate resource-sharing scheme in accordance to the provisions of the United Nations Convention on the Law of the Sea (UNCLOS).

The two sides likely envision resource-sharing ventures similar to the Camago-Malampaya gas project, located off the coast of the Philippine island of Palawan in the South China Sea, where multinational energy giants Chevron and Shell are the lead investors.

One proposal is for the Philippine National Oil Company to subcontract CNOOC to develop energy resources in the nearby Calamian Islands, which lies outside the Philippines’ EEZ as well as China’s nine-dash line map.

The arrangement would seemingly clear most potential legal hurdles and seems politically viable. A similar arrangement, though more controversial, is being considered in neighboring Reed Bank, a potential site of huge untapped hydrocarbon resources.

Even if the two sides never actualize the broached JDA, the mere discussion of such arrangements will allow China to further divide and rule its smaller resistant neighbors while providing new diplomatic veneer on its ever-expanding military footprint across the wider South China Sea.