Are Donald Trump and China Destined to Clash Over Taiwan (And More)? 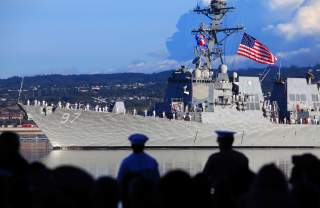 President-elect Donald Trump’s stunning phone call with Taiwan’s president Tsai Ing-wen has overturned decades of US diplomatic protocol when it comes to the thorny cross-Strait issue. The reaction of many analysts and media commentators has been negative, pointing to the risks of upsetting the US-Sino relationship, undoubtedly the most consequential for stability in the Asia–Pacific. But before canvassing some of the risks, it’s important to see the Trump-Tsai conversation as a turn that could actually deliver positive results for cross-Strait stability as well as broader regional security.

In recent years, US ‘strategic ambiguity’ over the Taiwan issue—leaving open the question of whether it would defend the island in the event of an unprovoked Chinese military attack—has arguably failed to stymie Beijing’s policies to strategically suffocate Taipei. Instead, Beijing’s growing capacity to pose a conventional military challenge to US forces in a future Taiwan Strait contingency, in combination with Taiwan’s economic dependence on mainland China, led to growing concerns about whether the US might abandon Taiwan sooner or later. Moreover, since Tsai’s election in January 2016 Beijing has attempted to further limit Taiwan’s international breathing space to coerce her government into formally accepting the ‘1992 Consensus’ as a basis for cross-Strait cooperation, despite the fact that she implicitly recognized it.

As I’ve argued in a co-authored ASPI report earlier this year, amid changing power dynamics, cross-Strait stability increasingly depends on a more visible US commitment to assisting Taiwan against Chinese coercion. That’s particularly the case since Taiwan’s democratic consolidation makes a unification on Beijing’s terms ever more unlikely, potentially raising the risk for escalation. Trump’s calculated move is likely to cause greater uncertainty in the minds of China’s decision-makers about America’s reaction to efforts to forcefully unite with Taiwan. If so, that’s a good thing since Chinese restraint over Taiwan is the key element for cross-Strait stability.

Trump’s call could also signal a greater willingness to push back more generally against China’s assertive behavior in the South China Sea and East China Sea. Arguably, the US ‘rebalance’ has lost some of its momentum and certainly hasn’t stopped Beijing’s advances in eroding the maritime rules-based order. Trump’s senior advisors on Asia–Pacific security—including Alexander Gray and Peter Navarro—reflect a different school of thought than the one exemplified by the White House over the past eight years: in order to maintain its leadership position the US needs to resolutely push back against China’s assertiveness within a ‘peace through strength’ framework. Again, if China moderates its behavior in the face of a more determined Trump administration, regional stability could be enhanced rather than weakened.

However, there are considerable risks involved in Trump’s approach. The first is that upon taking office in January next year, President Trump will sacrifice the broader strategic objectives in the US–Sino relationship for his strong support for Taipei. China will certainly test his resolve on Taiwan and a failure to follow-through would send a bad signal to the region about America’s credibility. Likewise, Trump’s ongoing enthusiasm for Taiwan could prove a double-edged sword for Taipei if he publicly offers too much diplomatic and military support. After all, Taiwan has a delicate relationship with China which it doesn’t want to see derailed.

The second major risk is that the Trump administration fails to develop a coherent and effective grand strategy for the Asia–Pacific, and particularly for dealing with China and America’s allies. If the conversation with Tsai was the start of a rather erratic display of unilateralism smacking of efforts to ‘contain’ China, the region is indeed in for a very rocky ride. It’s likely that even America’s closest allies, including Australia, would have great difficulty supporting such an approach. China isn’t the Soviet Union, and regional countries would prefer Washington to continue the delicate balance between competition and cooperation with Beijing. It’s thus imperative that the Trump administration speak to allies and partners about its vision for regional stability, and to seek an early buy-in.

Trump’s Taiwan gambit also potentially has significant implications for Australia. Canberra takes a key interest in the future of US–China relations, not least since our close alliance with the US would raise serious questions about commitments in the event of a direct conflict between Washington and Beijing. It’s entirely possible that Trump’s administration will seek to strengthen its relationship with Taiwan and that it’ll encourage allies such as Australia to also increase their engagement.

For Australia (and the rest of the region), Trump’s Asia–Pacific policy promises to be less acquiescent vis-à-vis China’s attempts to increase its regional influence through coercive means. That carries both opportunities and risks for Australia. We have a fundamental interest in preserving the rules-based order in the region, and absent US leadership, that objective becomes enormously difficult to achieve given China’s growing power. However, an overtly aggressive, unilateral US China policy would not only slowly erode the alliance, it would probably also be self-defeating.