Are Russia and America Headed for a 'Missile' Showdown? 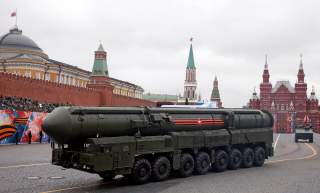 The United States has been discussing ways to coax the Kremlin back into compliance with the Intermediate-Range Nuclear Forces (INF) Treaty with other members of the NATO alliance in Brussels.

“The discussion included a consideration of the Russian Federation's violations of the Intermediate Nuclear Forces Treaty and our collective efforts to bring Russia back into compliance with the INF,” U.S. Defense Secretary Jim Mattis told reporters during a press conference at NATO headquarters.

“This is absolutely necessary to sustain confidence in arms control agreements.  And we're doing so in a substantial, transparent and verifiable fashion.”

The 1987 treaty, which bans the United States and Russia from possessing ground-launched missiles with ranges of between 500 kilometers and 5,500 kilometers, is credited by many including former U.S. Ambassador to the Soviet Union Jack Matlock as marking the beginning of the end of the Cold War. The landmark treaty, which will mark its 30th anniversary on December 8, is in danger of collapse given Russia’s alleged violation and Congressional language that has been inserted into the fiscal year 2018 National Defense Authorization Act.

Though the Senate and the House are still ironing out the differences in their two versions of the bill, Section 1635 of the FY2018 NDAA would require the Pentagon to start development of a new missile that falls within INF ranges if Russia continues to violate the treaty. The bill also authorizes $58 million toward the development of such a weapon.

The NDAA, as it currently stands, also requires the Pentagon to produce a report for Congress examining various options to develop such an INF range missile. Those options include modified versions of the Tomahawk cruise missile, the Standard Missile-3, the Standard Missile-6, the Long-Range Stand-Off cruise missile and the Army Tactical Missile System, “as compared with the cost and schedule for, and feasibility of, developing a new ground-launched missile using new technology with the same range” according to bill.

It is not clear if the Congressional mandate would necessarily put the United States itself in violation of the INF treaty. The treaty does not seem to ban development work on INF class weapons until the point that prototypes missiles are built and flight tested.

But any such development activity would at the very least violate the spirit of the treaty, even if it was not a technical violation of the wording of the document. It “sets the stage for Washington to violate the agreement and would take the focus off Russia’s own INF violation. Russia could respond by publicly repudiating the treaty and deploying large numbers of noncompliant missiles without any constraints” as a bipartisan group of no less than sixteen arms control experts wrote to the U.S. Senate on September 13, 2017.

It is unclear what advantage new weapons in the INF class would confer on the United States or Russia. It is believed that Russia has tested and deployed a small number of GLCMs—which the U.S. intelligence community has designated the SSC-X-8 and which might carry the Russian designation 9M729—in violation of the INF treaty, but the Pentagon has never definitively stated as such publicly. It is not clear why the Russians would bother to develop such a missile however.

The INF treaty does not constrain the deployment of air-launched or sea-based conventional or nuclear-tipped missiles in the 500km to 5,500km range bracket. Either nation is free to deploy such weapons in the European theater, as such, it is unclear what advantage a 9M729 would confer onto Russian forces that a missile such as a nuclear-tipped Kalibr launched from a submarine could not. Russian Kalibr-armed Kilo-class submarines and corvettes are already based in Crimea and in the Kaliningrad exclave.

For the United States, a new INF-class missile would seem to be completely superfluous since Washington has plenty of air-launched nuclear-tipped cruise missiles that can accomplish the same mission. Moreover, as Ambassador Stephen Pifer notes, it would take many years and billions of dollars to develop a new American INF range missile and it is very unlikely that European NATO members would allow such a weapon to be deployed on their territory.

Indeed, starting the development of a new American INF-class missile might play right into Russian hands. The Russians have been trying to maneuver the United States into abrogating the INF treaty first given their own violation of the accord. Thus, Congress could be handing the Kremlin a propaganda victory.

“Paradoxically, formal accusation of violation made Russian withdrawal less likely: it is one thing to abrogate a treaty that you judge is no longer in your national interest and quite another thing abrogating a treaty you’d just supposedly violated,” former Soviet and Russian arms control negotiator Nikolai Sokov, now a senior fellow at the James Martin Center for Nonproliferation Studies at the Middlebury Institute of International Studies at Monterey, told The National Interest. “Some Russian counter-accusations make sense, but are vastly weaker, in any event. I suspect that now they seek to maneuver the U.S. into abrogating first, that would solve their problem. Looks like they are succeeding.”

NATO has to start discussing such issues now since the collapse or abrogation of the INF treaty would be highly destabilizing, unleashing an expensive and dangerous new nuclear arms race in Europe with far reaching consequences that cannot be foreseen. “We discussed our strategic nuclear issues, in which I received input from our allies to our ongoing posture review in Washington D.C.,” Mattis said. “NATO is a nuclear-armed alliance, and it is natural and necessary for us to have such discussions among trusted allies.”

NATO has, Mattis noted, has been a nuclear-armed alliance from the day it was founded on April 4, 1949, with the signing of the Washington Treaty. Thus, it is crucial for the 29-member NATO alliance to discuss nuclear issues even though apart from the United States only Britain and France have an independent nuclear capability.