Are Russia and America Headed Towards a Nuclear War? 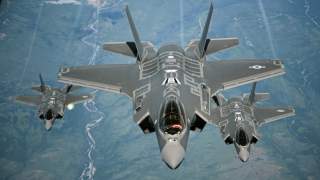 The current tensions between Russia and the NATO Alliance are more dangerous than even the Cold War at its height in the view one former top-level uniformed Western official.

During the Cold War there was a military balance between NATO and the Warsaw Pact that lent itself to stability. Moreover, the United States and its NATO partners had established communications channels with the Soviet leadership during that period. The same cannot be said of the current regime in the Kremlin—which is in many ways more volatile. Thus, not only is there a danger of a skirmish breaking out between NATO and Russia in Eastern Europe, it is very likely that such a conflict would quickly escalate into an all out nuclear war.

“Is this a return to the Cold War?” Gen. Sir Richard Shirreff, former deputy Supreme Allied Commander Europe told an audience at the Brookings Institution on Oct. 19. “I think it’s more dangerous than that.”

Shirreff said that Western European nations, while economically prosperous in relative terms, are militarily and politically weak. That weakness serves as a beacon for Moscow to test Western resolve and push boundaries. Particularly, the 2008 war in Georgia served to demonstrate to Russian President Vladimir Putin that he could get away with aggression in Russia’s ‘near abroad,’ Shirreff said. “Russia respects strength and despises weakness and will continue to probe weakness,” Shirreff said.

The Russians seek to exploit weakness and sow divisions within the West, in Shirreff’s view. Particularly, Putin wants to decouple the United States from its allies in Europe. Thus, Moscow might test Western resolve in the vulnerable Baltic States—leading potentially to a nuclear war as NATO’s Article 5 clause is triggered. “If Russia puts one soldier across the borders of the Baltic States, that means America is at war,” Shirreff said. “And, of course, as I said earlier, potentially nuclear war as well.”

Shirreff conceded that under rational circumstances, it is a stretch to imagine that Russia would invade the Baltics. However, Shirreff argues that history has shown that strategy is more about the human dimension. “Humans are not necessarily rational,” Shirreff said. “Certainly, we need to be prepared for the worst case.”

The Road to a New Cold War:

Shirreff said that while he applauded the Baltic States ascension into the NATO Alliance and the West, it was probably not the best idea for the West to have promised the Ukraine and Georgia membership into the alliance in 2008. That promise, Shirreff said, prompted much of Russia’s belligerent behavior. Nonetheless, NATO now has to deter an increasingly aggressive Moscow with a militarily credible defense.

Indeed, in Shirreff’s view, Russia already believes itself to be at war with the United States. He cites evidence of Russian hacking into the U.S. government entities and attempts to influence the American electoral process as part of Moscow’s new war against the Washington. “Arguably, Russia thinks of itself at war with America already,” Shirreff said. “The hacking of Democratic Party emails in order to destabilize, undermine the integrity of an election a potentially a target state, that could be construed, I think, as an act of 21st Century warfare.”

Pushing Back the Russian Bear:

Shirreff argues that it is not too late to pushback against the Kremlin. The key is a robust deterrence—the Russians have to genuinely believe that the West will defend itself. Particularly, NATO must beef up its presence in the Baltic States, not with just the four individual multinational battalions that are currently planned, but a robust integrated combat brigade backed with air and naval power. Those forces would also have to be integrated with local forces, which would have to work together seamlessly. Ideally, NATO would have more forces available, but that is not a politically realistic proposition, he said. “NATO has got to be able to demonstrate that it has a credible defense plan that would survive the test of combat,” Shirreff said.

NATO would also have to develop a very high readiness task force to backup those forces in the Baltics. However, Shirreff did not elaborate on exactly how such a large task force would get to the Baltic States to reinforce those forces that would already be in place. Logistically, the problem is not an easy one to solve given Russia’s anti-access/area denial capabilities.

One potential option would be to attempt to relieve those forces via the sea, but Russian forces in can cover most of the waterways in the region with their Bastion-P shore-based anti-ship missiles. The other potential option would be to drive an armored fist through Russia’s Kaliningrad exclave to relive NATO forces in the Baltics—which is dangerous since at least one simulation I know off has shown that the Moscow is apt to use tactical nuclear weapons the instant the first Allied troops cross into their territory. And indeed, Shirreff noted that Russia often concludes large-scale military drills by practicing “nuclear de-escalation.”

Shirreff also called for the European members of NATO to increase their defense spending. The United States has increasingly borne the brunt of defending the alliance—much to the frustration of the U.S. government and large segments of the American population. However, Shirreff noted that it is highly unlikely that Western European nations will increase their spending unless their populations are genuinely afraid of Russia. There is, however, little immediate prospect of that. The commitment made by European nations to increase their defense spending to two percent of gross domestic product within ten years is insufficient. “That isn’t going to fool anyone,” Shirreff said.

Deterrence is the Key:

Ultimately, to prevent the situation in Europe from degenerating into open warfare NATO must present a credible deterrent. NATO has to draw a firm red line and telegraph the message to Moscow that crossing into alliance territory unequivocally means war. “It’s all about sending that message, the strongest possible message, thus far perhaps, but absolutely no further,” Shirreff said. “We will protect NATO territory, and don’t even think about it.”