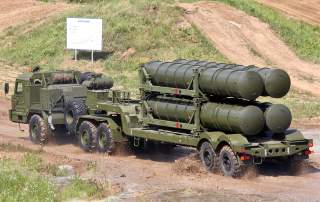 When Moscow deployed one of its advanced S-400 Surface-to-Air (SAM) system to Syria following the shoot down of a Russian Su-24 strike aircraft by a Turkish F-16 in late November 2015, both Russian and Western media sources were quick to note that the system is capable of engaging targets at ranges of up to 400km (250 mile) thanks to a new long-range missile known as the 40N6. Similar assertions were made following subsequent deployments of S-400 systems to Kaliningrad and Crimea. Yet, more than a year after the deployment to Syria, there is little evidence to suggest that the 40N6 is in fact operational.

Much of the confusion on whether the 40N6 has been fielded with the S-400 system has to do with another advanced Russian SAM system - known as the S-300V4 - which Russian troops began receiving in late 2014. In March 2015, the Russian Defense Ministry announced that a new unspecified 400km range missile intended for use with the S-300V4 had entered service with Russia’s military, leading a number of Russian media sources to assume that the missile in question is the 40N6. These assumptions, however, proved wrong; the following month a Russian Defense source told Russia’s TASS news agency that a new long-range missile for the S-400 system was scheduled to complete state trails in May-June of the same year. The source further noted that “the range of the new missile is the same as that of the recently adopted missile for the S-300V4 army air defense system,” but possess superior characteristics.

Although the Defense Ministry source did not name the S-400 system’s new missile, the above statement was a clear reference to the 40N6. In fact, hints that the S-300V4 and the S-400 would utilize different missiles with similar ranges emerged following a February 2015 article in the authoritative Russian-language Vozdushno-Kosmicheskaya Oborona (Aerospace Defense) Journal in which its authors mentioned a new long-range missile for the S-300V4 known as the 9M82MV. According to the article, the 9M82MV was successfully tested in 2004 and 2006, and is capable of intercepting targets at up to 350km (217 miles) away. Final confirmation that the 40N6 is different from the missile utilized in the S-300V4 system came in September 2016 when a representative of the Almaz-Antey Concern (the primary manufacturer of the S-300V4) told reporters that the S-300V4 will utilize a new 400km-range missile known as the 9M82MD. Unlike the 40N6 which is developed by the Fakel Machine-building Design Bureau, the 9M82MD is developed by the Novator Design Bureau, meaning that this missile is clearly not the 40N6.

Further evidence for the absence of the 40N6 in Russian SAM units can be found in images of S-400 systems deployed in Syria and elsewhere. A quick online search of the S-400 system’s transporter-erector-launchers (TEL) reveals images in which they are visible only in its “typical” configuration - that is with four paired missile container-launchers. Given that the S-400’s 48N6DM/48N6E3 missiles, which have a claimed maximum operational range of 250km (155 miles), occupy the entire length of the container-launcher, it is quite possible that the longer-ranged (and presumably bigger) 40N6 requires a larger container-launcher. This means a single TEL may only be able to carry two such missiles. Indeed, the S-300V4 system’s TELs that transport the large 200km (124 mile) range 9M82M and 400km range 9M82MD missiles are fitted with just two large container-launchers per vehicle. It is therefore not unreasonable to assume that the new missile is not yet operational. Perhaps it is premature to designate the airspace with a 400km radius of a S-400 system a no-fly zone.

Guy Plopsky holds an MA in International Affairs and Strategic Studies from Tamkang University, Taiwan. He specializes in air power, Russian military affairs and Asia-Pacific security. You can follow him on Twitter.