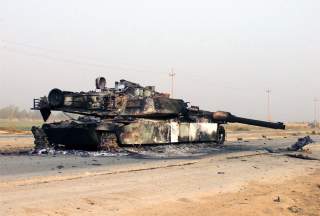 A picture may be worth a thousand words but a YouTube video could actually be worth a lot of lives, if the U.S. Army responds in an appropriate and timely manner.  I am referring specifically to a recent YouTube video (see video below) that shows the destruction of an Iraqi M-1 Abrams, basically the same kind operated by the U.S. military, by an ISIS fired, Russian-made Kornet anti-tank guided missile (ATGM).  Like something out of a video game, you can watch as the missile homes in on the tank. When it hits, the M-1 explodes in a display of pyrotechnics. Unquestionably, the five-man crew was killed.

The M-1 Abrams is without doubt the best main battle tank in the world. It is protected by specially designed armor to withstand cannon rounds and ATGMs. The coalition campaigns in Iraq in 1991 and 2003 resulted in so few U.S. tank losses that they may have created the illusion that the M-1 was essentially invulnerable. Such is not the case. In fact, several Abrams were disabled but not totally destroyed by Kornet missiles during Operation Iraqi Freedom. The same missile was employed successfully by Hezbollah in the 2006 Lebanon War to destroy a number of Israeli Merkava tanks. Since 2003, the U.S. military and its coalition allies have lost lots of vehicles of all kinds to rocket propelled grenades (RPGs).

The Kornet was first produced for the Red Army in 1998. Since then, the KBP Instrument Design Bureau has worked to improve the system’s performance. The introduction of ATGMs like the first generation Kornet was one of the reasons that the U.S. military upgraded its M-1s to the A2 configuration which included both specially designed composite or Chobham armor and explosive reactive tiles. The current missile version, the Kornet-EM, has a range of nearly five miles, an automatic target tracker with five times the accuracy of earlier variants and a “fire and forget” capability. It is reported to carry a so-called tandem warhead consisting of two explosive charges, one to defeat reactive armor and the second to penetrate the vehicle’s hull.

Advanced ATGMs such as the newest variant of the Kornet poses a particularly deadly threat to all main battle tanks.  ATGMs and even RPGs present a specific challenge to armored fighting vehicles when employed in complex terrain or urban environments. Tens of thousands of ATGMs are deployed around the world, many in the hands of U.S. adversaries such as Hezbollah, Hamas and ISIS. More than 1,000 Kornet-EMs alone have been supplied by Russia to the Syrian Army.

Regrettably, the material sciences have not advanced as rapidly as has that for missile guidance and warheads. As a result, at present it is not possible to produce new and more effective armor at both acceptable cost and weight.  Unless another path is chosen, the main battle tank may be rendered obsolete.

Fortunately, there is a solution. It is called active protection. Instead of relying solely on armor, or passive defenses, tanks and other armored fighting vehicles can be equipped with an active protection system (APS) that can defeat both RPGs and ATGMs before they can reach their targets. An APS consists of one or more sensors to detect and track an inbound rocket or missile, a battle management system and countermeasures that are launched to intercept the threat.

An APS is not just a theoretical solution. Following the 2006 Lebanon War, the Israeli military spent nearly a decade developing an APS, the Trophy system. Integrated by Rafael and employing an ELTA-built radar, the Trophy can detect RPGs, ATGMs and kinetic rounds from tank cannons. It fires a series of small shaped charges at the incoming target. A brigade of Trophy-equipped Merkava tanks were employed during the 2014 conflict with Gaza in extremely complex urban terrain. Some 15 Merkavas were reportedly attacked with RPGs or ATGMs; none were lost.

While Trophy is the sole battle-tested APS, there are others that are in advanced states of development.  One of these is the Israeli Iron Fist, developed by IMI. This system uses multiple sensors and both soft and hard kill countermeasures. Another is the U.S. Iron Curtain, a system developed by the Artis Corporation for the Defense Advanced Research Projects Agency. Iron Curtain employs both radar and optical sensors and uses explosively forged projectiles as its defeat mechanism.  Raytheon has a program called Quick Kill that has shown promise but has not been fully tested. Russia claims to have developed an APS and deployed it on its brand new Armata main battle tanks.

Even as missile threats to U.S. armored fighting vehicles intensify and Iraqi M-1s are being destroyed by current ATGMs, the U.S. Army has taken a deliberate – one might even say “go slow” – approach to deploying APS.  According to the Congressional Research Service, the Army has a two-track approach: The Expedited Non-Developmental Item program and the Modular Active Protection Program (MAPS). The former is focused on testing and then, hopefully, acquiring one or more existing APSs. The current plan is to test the Trophy, Iron Curtain and Iron Fist systems through FY2018 before deciding how to proceed. Thus, the earliest the Army could buy an APS is FY2019, meaning a unit set wouldn’t be deployed until FY2020.

The latter approach, actually only an R&D effort at present, has the goal of developing a modular framework and universal controller that will accept any set of sensors and countermeasures the Army cares to procure. The Army’s plan for MAPS has more to do with long-term acquisition policy than it does with actually providing an effective defense in the near-term. The Army wants to develop the government-owned framework to provide a universal interface enabling competition at the subsystem level. MAPS will not produce a functioning controller/interface before FY2019 which again means no system can be deployed before FY2021 at the earliest, probably even later.

The YouTube video of an M-1 being destroyed by an ATGM makes an irrefutable case for the U.S. Army acquiring active protection systems now.  The Army says all the right things about wanting APS but the current program does not reflect the urgency of the requirement. Congress needs to push the Army to deploy an existing system as soon as possible. But it also needs to be ready to provide the necessary resources.