Are the U.S. and China Headed Towards a Naval War in Asia? 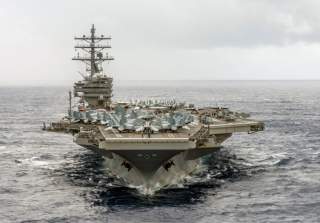 The United States does not have a coherent strategy to deal with a rising People’s Republic of China in the Western Pacific. Nor do foreign policy experts specializing in the Asia-Pacific region have a concrete set of ideas to coax an increasingly assertive Beijing into accepting the U.S.-led post-Second World War liberal-institutional world order or to reassert Washington’s dominance in the region.

It is becoming increasingly clear that China hopes to chart its own course independent of the existing Western frameworks as Beijing reaffirms its claims to the South China Sea and continues to build artificial islands in the region, but how policymakers in Washington will deal with the issue is an open question.

“U.S. policy has failed spectacularly,” Seth Cropsey, a senior fellow at the Hudson Institute, told a small lunch gathering at the Center for the National Interest—which is the foreign policy think-tank that publishes The National Interest—on Sept. 28. “China’s actions show that it see us as a strategic competitor. We choose to see China as a large market that can be cajoled and persuaded into joining us as a defender of international security and economic security. U.S. policy makers hope that the large volume of trade between China and the U.S. and the accompanying economic progress in the former would remold Chinese rulers to look, think and act more like us. The evidence does not support this hope.”

But while the Chinese see the United States as a strategic competitor, experts agree that a military confrontation is not a foregone conclusion. Beijing hopes that it can force the United States to de facto accept the South China Sea as its territory. “I don’t think conflict—naval or otherwise—between the U.S. and China is inevitable,” Cropsey said. “More likely is that China will continue its effort to turn the international waters of the East and South China Sea into territorial waters.”

China is using a multipronged approach to deny U.S. naval and air forces access to the region using a sophistical network of anti-access/area denial (A2/AD) weapons. Additionally, Beijing is actively working to intimidate and harass U.S. allies in the region in the hopes that they will acquiesce to Chinese demands. But Beijing is not just using its military forces in its efforts to force America and its allies from the region,  China is using paramilitary forces and “maritime militia” to harass fishermen and other commercial users of those water from other nations in order to gain de facto control over the East and South China Seas.

“I do think that if U.S. policy continues largely to overlook increasing Chinese aggression off its international waters on its south coasts, the prospects for a Chinese hegemony will increase as our Asian friends and allies seek new accommodations, new trading partners and new security arrangements,” Cropsey said. “Our willingness to resist China’s challenge to the international order is not growing.”

Indeed, Cropsey argues that American seapower is shrinking and that the naval balance in the Western Pacific is tilting toward China’s favor. The U.S. Congress simply does not understand how grave the situation is, Cropsey said. The United States must remember its large economic stake in Asia and the alliance network that girds those interests. “Instead of encouraging China to become a stakeholder in the international system, our goal ought to be to use diplomacy, military strength—including increased presence—to convince China that we will protect the international order...and ultimately—for this is what is at stake here—the United States’ broad interest in retaining our current position as a great power,” Cropsey said.

While Cropsey suggested that the United States shift towards protecting its power in the Western Pacific, but he did not suggest any concrete course of action on exactly how Washington might achieve those aims. Retaining America’s position as the preeminent power in the Western Pacific likely requires a concerted grand strategy on the scale of President Harry S. Truman’s NSC-68—which formulated America’s response to the Soviet threat in 1950. However, most of the discussion focused on lower level policy questions directly relating to freedom of navigation (FON) in the South China Sea and policing fisheries.

Jeff Smith, director of Asian Security Programs at the American Foreign Policy Council—who was speaking alongside Cropsey—told the audience that China has been very clear that it does not believe U.S. military forces should be operating in the East and South China Seas. Beijing has made the calculation that it cannot effectively prevent the United States from operating in the region right now, but as Chinese naval capabilities grow that might change. “There is a lot to suggest one day they may well be in a position to restrict the navigation of the U.S. military and believe they’re in a position to do so,” Smith said. “So the prospect for some kind of confrontation there is very real.”

The United States—despite never having ratified the United Nations Convention on the Law of the Sea (UNCLOS)—interprets international law as allowing its warships to operate and conduct surveillance within any nations’ exclusive economic zone (EEZ) and pass through a nation’s 12-nautical mile territorial waters under “innocent passage.” That interpretation is widely accepted by the majority of maritime nations, however Beijing operates under a minority interpretation—shared by about two dozen countries—where it insists on prior notice before foreign warships may operate in its EEZ. “Unlike other countries who may send us a diplomatic protest when we operate, because we do these freedom of navigation operations—18,19, 20 a year—among friend and foe alike, Chinese vessels have actually confronted our warships,” Smith said. “This disagreement is very much out in the open and it’s becoming a test of wills.”

The United States believes that is on solid legal grounds to operate in seas claimed by China—bolstered by a recent Permanent Court of Arbitration ruling in The Hague in July. However, international law only goes so far in the face of hard power—and China is doubling down on its claims—both with rhetoric and with a combination of naval forces and so-called maritime militia. Smith didn’t offer any solutions as to how the United States and its allies should convince the Chinese to accept the status quo as its power grows.

Eric Gomez, a defense and foreign policy analyst with the Cato Institute—who was also presenting alongside Smith and Cropsey—offered a potential strategy for dealing with a rising China. Gomez suggests that the United States should moderate its goals to maintain commercial freedom of navigation and making sure territorial disputes in the region don’t turn into hot wars. If the United States can’t prevent territorial disputes from turning hot, it should work to prevent Beijing from gaining military domination over East Asia.

The United States should reduce the presence of its ground forces in the region, Gomez said. Those U.S. ground forces that remain should focus on anti-access/area denial capabilities such as coastal anti-ship cruise missile batteries and air and missile defense. Naval presence should remain constant, but the United States should focus less on aircraft carriers and much more on submarine warfare in order to focus on sea denial capabilities, Gomez said. Freedom of navigation operations should continue in response to specific Chinese actions such as the militarization of the South China Sea.

“Sea-denial with China is more defensively-oriented and plays into U.S. military advantages in undersea warfare and surface control,” Gomez said. “I don’t think we should be trying to get in through the A2/AD bubble with China and attack targets on their mainland. I think that has some very serious escalation risks.”

Such as strategy would create a no man’s land (or sea in this case) in the region where the two powers could establish a de facto status quo, Gomez said. It would also make conflict less likely without forcing the Unites States to abandon the region. Gomez admits that his plan could effectively create spheres of influence in the region and might not be politically popular, but America’s relative power compared to Beijing is on the wane.

“I think we need to admit to ourselves that the United States is no longer as dominant in East Asia as it used to be, and reengaging on questions of military deterrence at the expense of these legal and normative concerns would be a more productive long-term discussion,” Gomez said. “I don’t see an easy route to getting China onboard to legal and normative order unless you can cite some sort of military deterrent.”