Are U.S. Aircraft Carriers About to Become Obsolete? 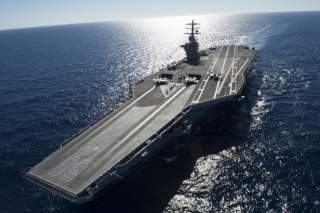 Ever since I was a midshipman—way back under a Navy Secretary named Lehman—pundits, analysts, and strategists have been wondering whether the US Navy’s supercarriers are too big. And so again in 2015. The new Ford-class ships are a few billion more expensive than their Nimitz predecessors, and Senate Armed Services Committee Chairman John McCain is worked up about that price.

The Navy and Newport News Shipbuilding argue that the cost is merited, as the newer ships promise more sorties per hour than those in the fleet today. Even so, Sam LaGrone of USNI News reports that the “Navy is Conducting an Alternative Carrier Study”. He quotes Navy Secretary Stackley, in testimony before McCain’s panel, telling of how the service wants to know

Is there a sweet spot, something different other than today’s 100,000 ton carrier that would make sense to provide the power projection that we need that we get today from our aircraft carriers but at the same time put us in a more affordable position to provide that capability?

(Recommended: Are Submarines About to Become Obsolete?)

In National Defense magazine this month, Sandra Erwin similarly avers that the first mission for the USAF’s Long-Range Strike Bomber (LRS-B) is to “Avert a Procurement Death Spiral”. The considerable sum for even the price cap—$550 million—is enough to give pause. But in that article as well, retired Air Force Lieutenant General David Deptula argues that

We have to stop looking at cost per individual unit as a measure of merit, and look at cost per desired outcomes. [Rather, we should ask] how many targets can you kill with a couple of long-range bombers versus an armada of short-range aircraft? It is far cheaper to get the same results.

Similar views, those: bigger is better with returns to scale. Meanwhile, “Amazon, Alibaba, and others” are working in the other direction, aiming to resolve the technological, operational, and regulatory challenges of fielding legions of tiny delivery drones. One of Google’s recent ideas (now abandoned, perhaps) was a tail-sitting flying wing—rather a step beyond Northrop’s once-and-future innovation.

Of course, a frightening number of weaponized quad-copters can be purchased for the price of one Ford-class carrier or twenty LRS-Bs. But a team at RAND argued last year that all those tiny drones would not be so “Armed and Dangerous”. Small platforms often lack range, and a capability isn’t much of a capability if it can’t reach its target.

It’s also possible, as Senator Rand Paul opined recently, that air defense against such miniscule intruders is as simple as "I've got a shotgun.” But that doesn’t mean that larger is more readily defended.

As Captain Wayne Hughes of the Naval Postgraduate School showed in Fleet Tactics and Coastal Combat (Naval Institute Press, 2nd edition, 2014), the historical record from the Second World War indicates that the amount of explosive power needed to sink a ship varies roughly with the cube root of its displacement. That means that a 100,000-ton Ford-class ship can take about twice as much damage as a 12,500-ton cruiser.

Worse, any bomber can be brought down by a single anti-aircraft missile. What’s changed recently is that the Chinese and the Russians, should push come to shove come to shooting, would give rather better account of themselves than the Serbs. And back in 1999, even they could bring down a stealth bomber.

There’s a parallel here to finance. When systems become too big to fail, the failure partly comes in the rush to prevent their failure. Pour enough money into a failing bank, and along the way, you’ve created at least a scandal, and maybe a crisis.The carriers get ringed with expensive escort ships, and the bombers become multi-hundred-million dollar investments in their own right.

So the Navy is thinking about smaller carriers. Firepower will be distributed: as Vice Admiral Rowden says, “if it floats, it fights.” Through DARPA’s TERN program, the Navy is asking Northrop Grumman and Aerovironment to bring long-range aircraft capabilities to small-ship decks. And the USAF will likely ask that those LRS-Bs be considerably smaller too than the B-52s, B-1s, and B-2s they will replace.

Let’s be clear: stealth is not dead, scale is not dead, and 2016 will not be the year of the swarming mechanical insect. But the ubiquity of precision weaponry and the miniaturization of sensors has brought much greater striking power to even existing aircraft and ships.

The Navy and the Air Force are thinking about ratcheting down the size of their biggest platforms. For in the face of a determined and well-equipped enemy, when so much of the striking power resides in 10 carriers and 20 bombers, those hoped-for returns to scale may not be worth the investment.