Are U.S. Fighter Jets About to Become Obsolete? 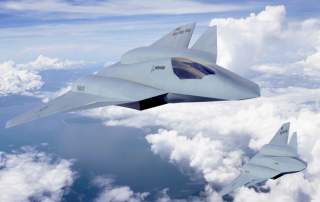 Traditional fighter aircraft like the F-22 are becoming obsolete, according to a forthcoming study by a leading U.S. defense think tank.

Next week the Center for Strategic and Budgetary Assessments (CSBA) will publish a new paper entitled “Air-to-Air Combat – Implications for Future Air Superiority.” The paper, which was written by John Stillion, a senior fellow at CSBA, and leaked by Breaking Defense this week, argues that advances in sensors, communications technology, and guided weapons are eroding the traditional advantages of fighter jets.

“Over the past few decades,” Stillion writes in the report, “advances in electronic sensors, communications technology, and guided weapons may have fundamentally transformed the nature of air combat.”

Specifically, these advances have enabled “pilots to search effectively much larger volumes of sky and engage targets at ever-increasing range.” As a result, attributes that have traditionally been deemed essential to success in air-to-air combat, such as high speed and acceleration and maneuverability “are much less useful now that aircraft can be detected and engaged from dozens of miles away.”

(Recommended: Are Submarines about to Become Obsolete?)

Instead, Stillion argues that other attributes like “minimal radar and IR signature; space, payload, and cooling capacity; power for large-aperture long-range sensors; and very-long-range weapons” will be key to achieving air dominance in the future.

This could spell the end to traditional fighter jets like the F-22 because, as Stillion explains, equipping aircraft with attributes like supersonic speed and high maneuverability comes at the expense of some of these non-traditional attributes.

Indeed, there is evidence that the Air Force is already planning for this. One of the major challenges of using super stealthy bomber-like planes for air-to-air combat is the limitations the design places on payload capacity.

However, as Next Big Future has noted, “In November 2013, the Air Force Research Laboratory released a request for information (RFI) for a laser weapon that could be mounted on next-generation air dominance fighters by the 2030s.” Using lasers instead of missiles for air-to-air combat would theoretically solve the payload capacity problem.

Also consistent with the CSBA report, back in February Chief of Naval Operations Adm. Jonathan Greenert, the Navy’s top officer, downplayed the importance of speed for the Navy’s Next Generation Air Dominance F/A-XX fighter jet. “I don’t see that it’s going to be super-duper fast, because you can’t outrun missiles,” Greenert said, The National Interest previously reported.

Contrary to the findings of the new CSBA paper, however, Greenert also said that stealth is becoming a wasting asset as well. “You know that stealth may be overrated…. If something moves fast through the air and disrupts molecules in the air and puts out heat – I don’t care how cool the engine can be – it’s going to be detectable.”

The Air Force quickly disputed this view. Only days after Greenert made his comments, Air Force Gen. Hawk Carlisle, the head of Air Combat Command, said that stealth would be “hugely important” for the next generation fighter. “"Stealth is wonderful, but you have to have more than stealth," Carlisle said.