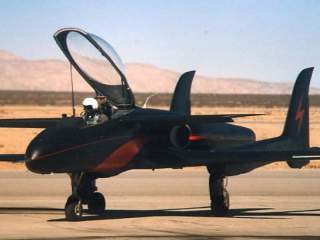 While the U.S. Air Force’s OA-X program is once again coming to the fore as an alternative to using high-end jet fighters against poorly armed insurgents, the idea is not a new one.

While the last iteration of the concept came in 2008, in earlier years the U.S. Army led the charge to field a new light attack aircraft under the Low Cost Battlefield Attack Aircraft (LCBAA). Though the program never reached fruition due to political infighting between elements within the Army and the United States Air Force, legendary aircraft designer Burt Rutan build the Scaled Model 151 Agile Responsive Effective Supports or ARES demonstrator for the effort using his own money.

“A design study was performed by Rutan Aircraft Factory in 1981 for such an aircraft. Its mission goals were low-altitude, close air support, with long endurance, and with adequate field performance to operate from roads,” as Scaled—now owned by Northrop Grumman—notes on its website. “Scaled followed up with the concept, and ultimately decided to build a demonstrator aircraft with internal funds. The ARES first flew on February 19, 1990.”

The Ares was a highly innovative design that eschewed high technology for the sake of simplicity and maintainability—not to mention cost. The light jet was built around a Pratt & Whitney JT15D turbofan that provides 2,950lbs of thrust and is armed with a General Electric GAU-12/U 25mm five-barrel rotary cannon.

One of the unique features of the aircraft is that the engine and the inlet are offset eight degrees to port while the fuselage is offset to starboard of the wing centerline. The reason for the odd configuration is to ensure that exhaust gasses from the  GAU-12/U are not ingested into engine. The unique feature also helps to cancel some of the recoil from the gun. “During November of 1991, tests of the GAU-12/U gun system installed in ARES were performed, with outstanding results,” as Scaled notes on its website.

Rutan designed the canard configuration aircraft to be easy to fly even without complex fly-by-wire controls. Indeed, the Ares’ flight control systems were completely mechanical and the jet even had a backup mechanical fuel controls for the JT15D engine. “ARES has flown more than 250 hours, and demonstrated all of its design performance and handling qualities goals, including departure-free handling at full aft stick,” Scaled states.

Nor did the jet’s lightweight and simple construction detract from survivability. It was extremely agile—with turn rate of 36 degrees per second at 7G—and it boasted armored fuel tanks. Indeed, the rugged aircraft proved almost ideal for its stated mission goals of “low-altitude, close air support, with long endurance, and with adequate field performance to operate from roads.”

But what happened? The answer is internal politics within the Army and the Air Force killed the program. LCBAA was the brainchild of Army aviators Jim Kreutz and Milo Burroughs for what was then the Army’s High Technology Test Bed at Fort Lewis, Washington, with the blessing of the service’s then Chief of Staff, Gen. Shy Meyers. For a time, the program enjoyed the support of legendary Air Force Col. John Boyd and Chuck Spinney—who was one of his disciples.

But the program fell apart after Meyers’ retirement as the effort faced stiff resistance from the Air Force—which jealously guarded its prerogative to operate all land-based fixed wing tactical aircraft as stipulated by the so-called Key West Agreement of 1948 (Both Boyd and Spinney were considered radical elements in the Air Force hierarchy). Meanwhile, elements within the Army—fearing that the LCBAA threatened the Hughes AH-64A Apache helicopter gunship program—also worked to torpedo the Ares project. Ultimately, they succeeded—the Ares never completed development or entered production.

The sole Ares demonstrator continues to fly as a research aircraft. It even appeared in a movie as the secret Nazi-era Me-263 jet in the atrocity that was Iron Eagle III.