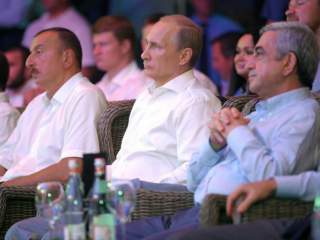 Today in Armenia, which is an ally of Russia in the South Caucasus, the public, the expert community and various political forces are discussing the practicability of membership in organizations that are not able to give an objective assessment of the ongoing processes. It is worth mentioning that officially Yerevan is a member of the Collective Security Treaty Organization (CSTO), the Eurasian Customs Union and the Eurasian Economic Union (EEU). Azerbaijan isn’t a member of any of these. In addition, Armenia is the only country in the Caucasus region where Russia's military presence (the 102nd military base in Gyumri) is still preserved. However, the deterioration of the situation in the Karabakh-Azerbaijani conflict zone has revealed serious systemic problems in Russian integration projects in the post-Soviet space.

The main issue is the lack of mechanisms to coordinate the positions of the Eurasian Union and the Collective Security Treaty Organization members on important political issues. Since the beginning of hostilities in Nagorno-Karabakh, the authorities of Belarus have expressed support for Baku, stressing the need to restore the territorial integrity of Azerbaijan. In Yerevan, it is said that such statements are contrary to the commitments made by the parties in the framework of the CSTO and other multilateral structures. Another member of this organization—Kazakhstan—was more reserved, but its expert community, close to governmental agencies, also made statements in favor of Azerbaijan. The well-known Kazakh political scientist Aidos Sarym, commenting on the situation in Karabakh, said that in order to support Armenia it is necessary to provide a historical, cultural and traditional base. He also stressed that if Kazakhstan were to choose between Azerbaijan and Armenia, it would have to choose Baku.

Official Astana expressed its political attitude towards Armenia through its reluctance to attend a meeting of heads of the EEU governments, which was to be held in Yerevan. Kazakhstan as well as Belarus and Kyrgyzstan offered to move the meeting from Yerevan to another location not to irritate the Azerbaijani authorities. The principled position of the three members of the Eurasian Union received support in Moscow. During the conversation with his Armenian counterpart the Russian Prime Minister Dmitry Medvedev declared readiness to hold the appointment in Moscow. The Armenian side spoke rather harshly about such offers coming from their allies. Armenian president Serzh Sargsyan noted that the behavior of Kazakhstan, Belarus and Kyrgyzstan dealt a serious blow to the reputation of the Eurasian Union.

It is known in Yerevan that Kazakhstan, Kyrgyzstan and Azerbaijan are countries with a predominantly Muslim population. Besides that, they work closely in the Turkic Council. And it is no secret that Kazakhstan and Azerbaijan are dynamically developing bilateral trade and economic relations and investing heavily into infrastructure projects in Kyrgyzstan. Moreover, Baku has consistently provided substantial financial support to Belarus. Not surprisingly, Astana and Minsk did not look kindly on Armenia's accession to the Eurasian Union. The president of Kazakhstan, Nursultan Nazarbayev, and the leader of Belarus, Alexander Lukashenko, have repeatedly emphasized that Armenia is accepted into the organization within the borders recognized by the UN. Thus, Astana and Minsk have never hidden their commitment to support Azerbaijan, and Yerevan realized that. So, why did the Armenian authorities take that decision to join the Eurasian Union?

For Armenia, which is under blockade by Turkey and Azerbaijan, the priority is safety. Over the past twenty years, the Armenian elite hasn’t built a long-term economic strategy that would allow it to establish and develop the most important governmental institutions. The high level of corruption—a common feature of all the post-Soviet countries—has led to a large wave of emigration from Armenia. Internal political problems were accompanied by diplomatic passivity. Moreover, there is a crisis in the global Armenian diaspora, which has limited itself by the Armenian Genocide recognition issue. This complex of problems has resulted in Yerevan’s foreign and domestic dependence on Moscow. Russian statements about a strategic alliance with Armenia generated high expectations among the general Armenian public. Yerevan regarded entry into the Eurasian Union as the institutionalization of relations with Russia that, according to Yerevan, are the central force of the integration projects. However, Kazakhstan and Belarus are trying to demonstrate to their people and external actors that Russia is not a major player in the Eurasian Union and cannot ram through its own interests and Armenia’s. The decision to move the meeting from Yerevan to Moscow clearly confirms this.

The recent events have shown that Armenia’s entry into the EEU had the opposite effect. Though Azerbaijan is not a member of the Eurasian Union, it has a political influence on Kazakhstan, Belarus and Kyrgyzstan; they, in turn, are putting pressure on Russia. The situation in Armenia is doubly complicated by the fact that Moscow sells modern offensive weapons to Baku. Russian politicians and experts explain the delivery of heavy weapons as a way to maintain the balance of power between Armenia and Azerbaijan. However, the Armenian side says that these steps untie the hands of Azerbaijan to use force. Yerevan points to numerous statements by Baku claiming the possibility of restoration of its territorial integrity by military means. The shelling of the Nagorno-Karabakh Republic and regular statements by Sargsyan on the negative perception of the Russian policy have not changed Moscow's position. Deputy Prime Minister Dmitry Rogozin said that Russia will continue to supply weapons to Azerbaijan, while Prime Minister Dmitry Medvedev called Yerevan and Baku Russia's strategic partners, placing the two sides in an equal position.

Thus, the latest developments in the Karabakh conflict zone uncovered serious internal problems of the Eurasian Economic Union. It is difficult to say how events will develop further. It is unlikely that official Yerevan will decide to withdraw from the Eurasian Union, due to the lack of alternatives. It is also unlikely that the Armenian authorities will be able to influence the position of Russia and other members of the EEU radically. Clearly, the one thing that can be said for sure is that a certain correction of the foreign priorities will take place.

Areg Galstyan is a regular contributor to the magazines Russia in Global Affairs and Forbes.