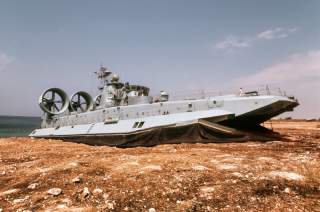 According to new photos, Huangpu Wenchong shipyards recently unveiled the Chinese equivalent of America’s Mobile-Landing Platforms. According to Jeffrey Lin and Peter Singer, authors of the excellent Eastern Arsenal blog, the new MLP, named the H1183, “is a 50,000 ton displacement cargo ship with a giant staging platform installed at its waterline, which can accommodate a wide variety of hovercraft, helicopters, fast craft and armored fighting vehicles.”

They also note that the H1183 has a deck area of around 4,000 square meters, and “its 33 meter by 120 meter submergible platform is large enough to carry up to three Type 726 hovercraft, which can transport one main battle tank from sea to land.”

Jane’s and other sources also reported on the commissioning of the new MLP, although they had much different measurements of the ship.

The concept of a MLP was first designed by the U.S. Navy as a cost-effective means of having a forward presence. The U.S. Navy has said of the concept: “The Mobile Landing Platform (MLP) is a highly flexible ship that provides logistics movement from sea to shore supporting a broad range of military operations…. These ships will operate within Maritime Prepositioning Ship Squadrons as mobile sea bases providing the U.S. Navy Fleet with a critical access infrastructure that supports the flexible deployment of forces and supplies.”

Want China Times usefully points out that “The ship's main roles are to transport heavy weaponry and combat supplies as well as act as a transfer point between large ships and small landing craft.”

In other words, the ships enable militaries to project power and enhance amphibious assault capabilities. In China’s case, this would be useful in a number of different scenarios, including an invasion of Taiwan and its dispute with Japan in the East China Sea. However, the MLP would be most useful in China’s disputes with several ASEAN countries in the South China Sea as many of the disputed islands and reefs are far from the Chinese mainland.

Already, China’s new MLP has been spotted carrying a Zubr class heavy amphibious assault hovercraft, which China has purchased from both Ukraine and, more recently, Greece. According to Tyler Rogoway of Foxtrot Alpha:

Compared to the already gargantuan U.S. Navy LCAC, the Zubr Class just dwarfs it. Fully loaded the US Navy LCAC displaces about 180 tons, while the Zubr Class displaces three times that amount. This hovering fortress can hit speeds up to 60kts in sea-state four and below, and can handle 5 degree grades and up to three and a half foot obstacles with relative ease.

The Jane's report also noted that, "other recent photographs show a logistics support ship under construction for the PLA. This is the second vessel with a roll-on, roll-off (ro-ro) design, bow and stern ramps, and an estimated full load displacement of around 3,500 tons."

Earlier this month, China also issued new regulations to civilian shipbuilders mandating that five types of civilian vessels—container, roll-on/roll-off, multipurpose, bulk carrier and break bulk ships— meet certain guidelines so they can be used by the military during national emergencies.

In announcing the new regulations, China’s state-owned media said the new measures “will enable China to convert the considerable potential of its civilian fleet into military strength and will greatly enhance the PLA's strategic projection and maritime support capabilities.” China reportedly has some 172,000 civilian vessels, many of which the People’s Liberation Army Navy could now use during a conflict to complement its already growing capabilities.