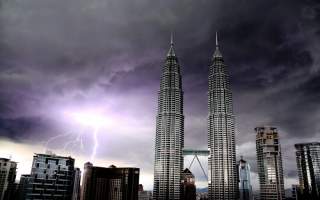 East Asia's path to industrial success is well-trodden, first by Japan, then the four tigers and now China. It combines Soviet-style financial repression and urban industrialization with a mercantilist focus on exports and protecting home champions. Buy local, sell global. This is the formula for How Asia Works. Can South, Central and Southeast Asian nations follow the East Asian convoy?

John Lee at the Hudson Institute has his doubts, citing two awkward realities that face latecomers and laggards.

First, robotics is tilting the advantage to capital-intensive rather than labor-intensive economies. 'Premature non-industrialization' is already here; it is becoming harder for poor countries to get rich the traditional way. The onset of peak manufacturing comes earlier now.

The second problem Lee identifies is one of simple demographic scale. In 1970, Japan, Korea and Taiwan collectively had 150 million people and exported goods to about 400 million wealthier Western consumers. Today, globalization has reversed the balance. Lee reckons there are 1 billion affluent consumers worldwide, but 2 billion striving to serve them and that's just in East Asia alone. The field is getting more crowded as India, Latin American and African nations join the export game.

Their biggest challenge is China. It is, uniquely, both an affluent domestic consumer market and a ferociously competitive exporter. China's scale economies, eager workforce and expertise are hard for the global supply chain to escape, other than for very low-end manufacturing like textiles. As China progresses, it may be closing the industrialization gate behind it. It is embracing automation to become the world's biggest robot importer. But Beijing naturally wants an automation industry for itself and targets an advanced domestic equipment base by 2025. When China makes the machines that make the machines that replace humans, workers of the world will unite in worry.

With such intense focus on corporate competitiveness and the interests of capital, it is not surprising that China's overseas developmental assistance is also businesslike.

Informed Chinese experts tell me that Chinese firms expect to scoop 93-94% of the contract value of all projects funded by the Asian Infrastructure Investment Bank (AIIB) plus the Chinese unilateral initiatives (like Silk Road Fund) combined. By Goldman Sachs' calculation, local expectations for China's newly re-combined train-making monopoly assume a clean sweep at home and an heroic 55% share of all railway rolling stock bought overseas in the next five years. These firms expect a bonanza of construction in which Chinese money, materials, management and manpower can build grand overseas projects. Foreign firms will have to settle for spillover business, in the form of subcontracts.

Indonesia's development minister, for one, is relaxed. The AIIB will focus on big-ticket items like coal-fired power stations, he reckons, which complements the World Bank's work in poverty reduction and public healthcare and the Asian Development Bank's focus on irrigation and rural roads. In other words, China will build big things; other agencies will do little things. The irony is that the early breakthroughs China itself made (partly with World Bank advice) were in the 'small' stuff: democratizing literacy, improving sanitation, and opening opportunity for women. Before it started pouring concrete, China got the basics right first.

No doubt the Chinese would love to sell expensive bullet trains to India, say, but if they were truly interested in assisting India's development, they should share their admirable experience in schooling girls. Would India listen? Narendra Modi does understand that his country risks being 'hollowed out' or de-industrialized unless his own 'Make in India' project succeeds. His trade deficit with China is soaring. India imports high-tech equipment while its exports to China read like the cargo manifest of a 19th century sailing ship.

China isn't alone in its single-minded pursuit of turnkey infrastructure projects. Building factories is, after all, easier than building 'institutional capabilities.' The ADB has long been accused of favouring Japanese construction firms. Russia has become a nuclear one-stop shop, financing, building and even operating nuclear power stations worldwide. Moscow is not particularly interested in transferring skills.

These are commercial transactions after all, not charity. Shen Dingli crisply explains that recent comparisons with the Marshall Plan are totally misguided. China is not granting aid nor should partner countries expect it. Instead this is a 'win-win' business arrangement. Certainly China's SOEs will win big. And shiny new highways and power plants and railways are welcome everywhere. But the bills will need to be paid.