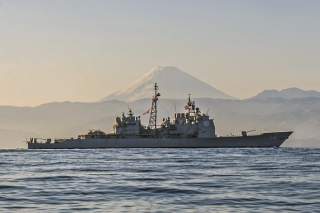 Claims that a destabilizing ‘arms race’ is underway in the Asia–Pacific have become commonplace and are supported by reports that regional defense spending has surpassed Europe for the third consecutive year. As my ASPI report released today shows, the corollary of this situation is intensifying naval competition in the region. The implications for Australia and the Australian Defense Force (ADF) are significant.

Decisions on arms acquisitions in the Asia–Pacific continue to be driven by a multitude of strategic rationales and domestic factors. The significant changes underway since 2008 raise questions regarding the primary motivation behind regional naval acquisitions, including their supporting air capabilities.

Maritime disputes between China and its neighbors have increased tensions and affected countries’ military modernization programs. These tensions have driven the requirement for greater surveillance capabilities and signals intelligence systems as well as more surface combatants with longer endurance and platforms able to launch anti-ship missiles, submarines, and long-range aircraft.

These disputes occur in the context of heightened uncertainty about the future distribution of regional power, particularly between the U.S. and China. Consequently, regional naval arms decisions are increasingly driven by ‘action–reaction’ dynamics—reciprocal dynamics in which developments in offensive and defensive capabilities become an interactive process in which the arms requirements of one party depend upon the known, assumed or anticipated capabilities of the forces of other parties; Those dynamics are manifested in counter-reaction (where one party responds to another’s capabilities) and mirror-reaction (where a party imitates another’s capabilities). In other words, these dynamics display some of the important characteristics of an arms race and show that the Asia–Pacific maritime zone is indeed becoming more contested, and potentially more volatile.

Obviously, there are regional differences between Northeast Asia and Southeast Asia. Naval ‘action–reaction’ dynamics are most clearly visible in Northeast Asia. It should be noted that a common argument (see for instance here) against the emergence of naval arms races or serious competition in Asia is that defense                        spending as a percentage of GDP remains rather modest in most countries. That’s also true for northeast Asian countries. However, this measure doesn’t take into account the real value amount, nor does it consider the sophistication or type of the defense equipment acquired by individual countries. Doing so paints a different picture, one that shows that China, Japan, South Korea and Taiwan are increasingly reacting to each other’s capabilities and modernization efforts. US capabilities are a key factor in this equation as well.

The picture in Southeast Asia is more complex. The South China Sea has dominated strategic rationales for increasing capabilities, particularly submarines. Since 2012 the number of naval platforms in many countries decreased while military expenditure continued to climb, indicating substantial efforts to modernize and invest in fewer but more capable systems. Despite these efforts, Southeast Asian countries (with the exception of Singapore) haven’t yet worked out how to develop, operate and sustain sophisticated capabilities. Should the ADF deploy to Southeast Asia in the future, it could face more sophisticated capabilities.

While the ADF won’t lose its ‘capability edge’ in Southeast Asia in the medium term, in the short term investments in certain platforms increase the chance of a ‘lucky punch’. For instance, Indonesia is testing supersonic missiles from its frigates and putting Chinese anti-ship cruise missiles on fast attack craft. With rising economic growth, Southeast Asian countries will better address problems such as maintenance and logistics and increase their combat capability through improved situational awareness and better command and control systems.

The dynamics of regional naval modernization indicate that the future security environment in the Western Pacific will only become more contested. Northeast Asia is already caught up in action–reaction dynamics. Maritime Southeast Asia might follow suit over time. Importantly, while not imminent, the ADF’s key tenet of being a technologically superior force in Southeast Asia will gradually be eroded, at least in certain capability areas.

The upcoming Defense White Paper will need to address how the ADF will modernize its own air and maritime capabilities in a neighborhood that’s becoming more complex. It also means that we need to invest even more in building sustainable regional defense partnerships and further strengthening our U.S. alliance.