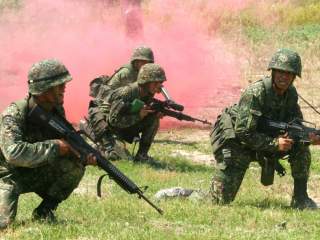 A specter is haunting Asia—the specter of full Chinese domination in the South China Sea. Latest reports suggest that China could soon move ahead with building military facilities on the Scarborough Shoal, a contested land feature it has occupied since 2012. This would allow China, according to a Mainland source, to “further perfect” its aerial superiority across the contested waters. By building a sprawling network of dual-purposes facilities, and more recently deploying advanced military assets to its artificially created islands, China is inching closer to establishing a de facto Air Defense Identification Zone (ADIZ) in the area. Integrating the Scarborough Shoal into its burgeoning defensive perimeter across the South China Sea will not only give it an upper hand in the contested waters, but also allow China to place the Philippines’ capital and industrialized regions within its strategic reach.

This is nothing short of a nightmare for the Philippines, which is already struggling to protect its supply lines in the Spratly chain of islands due to growing Chinese military assertiveness in contested waters. Unlike most of Chinese occupied features, which lie well beyond the immediate shores of other claimant states, the Scarborough Shoal is located just about 120 nautical miles off the coast of the Philippines, well within the country’s Exclusive Economic Zone (EEZ)—and also its continental shelf. To put things into perspective, the shoal lies nine hundred kilometers away from the closest Chinese coastline. For Manila, the contested land feature is arguably what James Shoal is to Malaysia and Hainan is to Mainland China.

Manila lost control over the shoal after a tense standoff with Chinese coast guard forces in the middle of 2012. But for more than a century, the Philippines has treated Scarborough Shoal as its northernmost outpost in the South China Sea. In fact, as far back as the Spanish colonial era, the Southeast Asian country has treated the shoal as the natural extension of its national territory. During Cold War years, it was a gunnery range and regular area of naval exercises for American forces, which accessed military bases in the Philippines.

As a leading Filipino maritime-law expert, Jay Batongbacal, explains, it was only after the departure of American military bases (1991) that China began to “take concrete action to assert its long-dormant paper claim to the shoal, beginning with the issuance of amateur-radio licenses to hobbyists in 1994,” the year China wrested control of the Philippine-claimed Mischief Reef. In short, China’s assertion of its (supposedly) historical claim on the land feature was hinged on coldblooded balance-of-power calculations. Cognizant of the Philippines’ minimal-to-nonexistent deterrence capability and the Obama administration’s equivocations on the extent of its defense obligations to Manila, China felt confident enough to usurp control over the shoal.

Meanwhile, the Philippines has been drenched in the ecstasy of presidential elections, with growing indications that the next government could be on a much more friendly footing with China, which giddily expressed its hope that the “new [Philippine] government can adopt positive and well-thought policies towards China, properly deal with relevant disputes, and improve bilateral relations with concrete actions."

Yet it’s far from assured that the next Filipino president will continue the incumbent administration’s alignment with America as well as its tough posturing against China. With the Arbitral Tribunal at The Hague expected to issue its final verdict on the Philippines’ case against China in coming months, the predisposition of the incoming Filipino president has gained greater salience. Above all, however, everyone is wondering about the United States’ next move: Will it stand by its ally and try to prevent China’s prospective militarization of the Scarborough Shoal, or, alternatively, will it continue its futile—if not counterproductive—policy of strategic ambiguity on the issue? Time is of essence.

China is beginning to feel the heat. Earlier this year, the usually meek Association of Southeast Asian Nations (ASEAN), after a retreat with U.S. president Barack Obama at Sunnylands, released a joint statement, which can be interpreted as a collective support for the Philippines’ arbitration case and, more explicitly, growing regional worry over China’s revanchist activities in the South China Sea.

Both American and ASEAN leaders expressed their shared "commitment to peaceful resolution of disputes, including full respect for legal [author’s emphasis] and diplomatic processes, without resorting to threat or use of force, in accordance with universally recognized principles of international law,” specifically the United Nations Convention on the Law of the Sea (UNCLOS). They also reiterated the centrality of "non-militarization and self-restraint" in the disputed waters, in accordance to the 2002 Declaration on the Conduct of Parties (DOC) in the South China Sea, which (Paragraph V) discourages China and ASEAN claimant states from “inhabiting on the presently uninhabited islands, reefs, shoals, cays, and other features.”

Shortly after the Sunnyland Summit, the ASEAN foreign ministers reiterated their earlier joint statement with America, expressing how they have “remained seriously concerned over the recent and ongoing developments [in the South China Sea] and took note of the concern expressed by some ministers on the land reclamations and escalation of activities in the area." During the recently concluded Group of 7 (G7) summit, the world’s leading Western powers and Japan were even more specific in supporting the Philippines’ arbitration case against China.

In their joint statement, foreign ministers of the leading industrialized countries expressed their vigorous opposition to “intimidating, coercive or provocative unilateral actions that could alter the status quo and increase tensions,” an unmistakable jab against China’s activities in the South China Sea. They also emphasized the centrality of the “peaceful management and settlement of maritime disputes . . . through applicable internationally recognized legal dispute settlement mechanisms, including arbitration,” an unmistakable endorsement of the Philippines’ arbitration case against China, which has boycotted the whole proceeding.

A besieged China lashed back, urging “the G7 member states to honor their commitment of not taking sides on issues involving territorial disputes." Worried about isolation in the region, China has also stepped up its efforts to divide-and-conquer ASEAN, urging Brunei, Laos (the current ASEAN chair) and Cambodia to decouple the South China Sea disputes from the regional agenda. China’s continued foray into Malaysian and Indonesian fishing grounds has also provoked a massive diplomatic backlash, with Jakarta threatening to revisit its relations with Beijing in light of what it views as a direct assault on its territorial integrity and sovereign rights within its EEZ. Malaysia may follow suit. China has practically alienated all key ASEAN states, including (ethnic-Chinese-majority) Singapore, which has openly accused Beijing of undermining regional unity on the South China Sea issue.

Though China’s plans for dominating the so-called First Island Chain go back decades—mainly based on the strategic vision of Beijing’s Mahan, Liu Huaqing, who was the commander of the Chinese navy from 1982-88—it is only in recent years that China has developed the requisite capabilities and mustered sufficient political will to push across its adjacent waters. But China is also beginning to realize that it can’t dominate its adjacent waters without losing the good will of its smaller neighbors. Relations with the Philippines have been particularly toxic in recent years. In fact, under the Aquino administration, the Southeast Asian country has been on the forefront of efforts to build international pressure on China.

The leaders in Beijing, however, seem optimistic that the upcoming elections in the Philippines may lead to some favorable recalibrations. And it has a lot of cards to play. For one, the shadow of an impending Chinese military base just 120 nautical miles off the coast of the Philippines is hovering above the Filipino presidential elections. One can’t rule out the possibility that China is trying to coax the Filipino presidential candidates into compromise by raising the prospect of militarizing the Scarborough Shoal.

More specifically, with the arbitration verdict expected soon, Beijing may be trying to intimidate the incoming Filipino administration against fully using the likely favorable outcome for the Philippines. Many legal experts expect the Arbitral Tribunal to nullify China’s claims over low-tide-elevations (LTEs) such as Mischief Reef and Subi Reef, providing a perfect legal pretext for expansive American-led Freedom of Navigation Operations (FONOPs) against China. The arbitration panel may even go so far as deciding on the validity of China’s notorious nine-dashed-line claims, which covers much of the South China Sea, as well as the validity and legal basis of its ‘historical rights/waters’ claims.

At the very least, China may be seeking to cajole the next Filipino president into keeping mum on the arbitration outcome, that is to say, to treat it as an advisory opinion and a relic of the past administration’s strategy rather than a binding legal decision under the aegis of the United Nations Convention on the Law of the Sea (UNCLOS). Interestingly, both leading presidential (Rodrigo Duterte) and vice-presidential (Ferdinand Marcos Jr.) candidates have signaled their interest in engagement rather than confrontation with China.

On his part, Marcos Jr., the only son of the late dictator, has consistently called for robust engagement and compromise with China. Even before taking the lead in the vice-presidential race, he called on the Philippine government to “make arrangement with China”, which involves negotiations on the Philippines’ fishing rights in contested waters but, crucially, “not the contentious issue of who owns the territories,” essentially, he expressed openness to a compromise over the sovereignty question. Echoing the vice-presidential frontrunner, Duterte has not only expressed his openness to direct talks with China as well as a possible joint development deal, but recently even stated that if China will "build me a train around Mindanao, build me train from Manila to Bicol . . . build me a train [going to] Batangas, for the six years that I'll be president, I'll shut up [on the sovereignty disputes]."