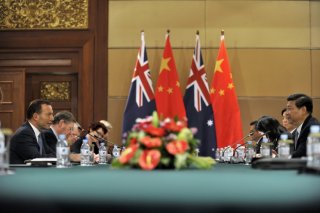 Australia and China have been booming together. Australian resources have fueled Chinese infrastructure investment, and Australia has built out its own infrastructure to deal with Chinese demand. But this story of mutual growth may be ending. Many observers believe China’s current 7.5 percent growth target will need to be moved lower, and empty cities underscore the growing concern that China has overbuilt. Australian exports are predominately commodities, and iron ore, coal, natural gas, and gold are all top 5 shipments abroad. This leaves Australia in an awkward economic position. Geographically, however, Australia may be ideally situated to take advantage of the next infrastructure boom—India.

As of May 2014, China consumed more than 35 percent of Australia’s exports, an extreme concentration. Japan, the second most popular destination for Australian exports, consumed 17 percent, and third place Korea took 6 percent, according to the Australian Bureau of Statistics. Australia does not appear to have the same ties to India. In fact, exports to India have fallen by half since the middle of 2010 due in part to a decline in the value of gold exports.

At the start of the 21st Century, trade between China and Australia was around $6 billion annually. Since then, it has exploded by more than 15 times—to $93 billion in 2013. This $88 billion increase constitutes more than half the $151 billion total gain in exports Australia has made so far this century.

Politically, the relationship between Australia and China is not always amicable. The Australian National Broadband Network is the largest infrastructure project to be undertaken in Australia’s history. Huawei, a Chinese technology company, was barred from bidding on the project with the Australian government, which cited security concerns in its decision.

Regardless, Australia and China have become deeply intertwined economically. For Australia, exports have benefited as China embarked on a building spree. But it may be time for Australia to begin planning its next move, before China shows signs of slowing its infrastructure investments.

Australia, in other words, needs another infrastructure boom. And so does India. India’s Twelfth Five Year Plan suggests that about $1 trillion should be spent on infrastructure over the 2012-2017 timeframe. This would equate to 10 percent of GDP every year being spent on infrastructure. A necessary boost to economic growth in India, where it has stalled for the past couple years. For Australia, having another mega customer would mitigate any weakness in Chinese growth. This transition may not be seamless though.

The funding for the infrastructure may not be easy to come by in India’s poor capital markets. China offered to finance $300 billion of the spending earlier this year. Given the history of border disputes between China and India, this gesture was seen as political posturing more than a potential investment.

India should be tempted by the funding though. Infrastructure for India is a necessity as highlighted by the blackout that left more than 650 million people without power in the summer of 2012. Investment in the electric grid is critical to economic growth, but roads and bridges matter too. These are problems that can only be fixed slowly, and at great cost.  In 2010, McKinsey estimated the cost of India’s poor logistical infrastructure at $45 billion per year. An investment in infrastructure would boost the Indian economy with employment gains from the construction itself, and it would have the long-term benefit of reducing a bottleneck in the Indian economy.

Unfortunately for the new Indian Prime Minister Modi and Australia, correcting the infrastructure deficit is not a straightforward task. The Chinese commitment may bring other global players to the table, but red tape and financing are significant headwinds.

Modi may want to move quickly on the economic plan his party proposed. The Bharatiya Janata Party Election Manifesto calls for building 100 new cities “adhering to concepts like sustainability, walk to work etc.” The plan is ambitious, and many of the ideas make economic sense—incubators for entrepreneurs and improving the lives of women, for example. But accomplishing all of the goals in the near or even medium term will be nearly impossible.

The BJP manifesto may be better suited as a sort of long-term road map of what India needs to be successful. The notion of building 100 new cities may sound excessive, bringing to mind the ghost cities of China. But India will require some new cities to accommodate urbanization that McKinsey estimates will result in India having 11% of the global urban population in 2025. As people migrate from rural to urban areas, wages and spending tend to increase. With a population of more than 1.2 billion people and trailing China in urbanization, India has ample room to begin the shift from the farm to the city. China, even with its ghost cities and previous rapid urbanization, is estimated to have 13 million people move to cities per year between now and 2030—more than the population of New York City every 12 months. India is both more populous and less urbanized China. If the BJP plan is implemented—even marginally, the benefits to Australia could be similar in many respects to the Chinese boom.

There is some movement between Australia and India to deepen ties. The Australia-India Comprehensive Economic Cooperation Agreement is in its fifth round of negotiations, and there appears to be support for the agreement in Australia. A study finds that while the agreement would benefit Australia more than India, it would be beneficial to both. At the moment, the level of Australian exports to India tends to be volatile and heavily tied to commodity prices.

Australia cannot shrug China off either. China and Australia have been in talks around a free trade agreement of their own for almost a decade. But after the 20th round of negotiations, they are aiming to conclude talks by the end of 2014. While China is likely to slow its growth in infrastructure spending in coming years, the level of spending is unlikely to drop over the medium-term.

Are these the first signs of an Asian economic triumvirate? Possibly, but it will take a tremendous amount of cooperation between countries which historically have not been overly friendly. China is scouring the world for investment opportunities, India can oblige, and Australia can supply the material. Australia, though shifting from a reliance on China in some respects, would be more tied to China than ever before in others. For all three countries to reach their full potential, it will be necessary to cooperate.

India’s expected tempered rate of urbanization would be better for Australia than the current Chinese boom. A steady, slow, and long urbanization cycle would allow Australia to continue its recent boom while avoiding internal economic bubbles. There will be volatility—with the concentration of trade to China there can be little else. But Australia has yet to reap the full benefit from one of the great urbanization stories of the 21st century.