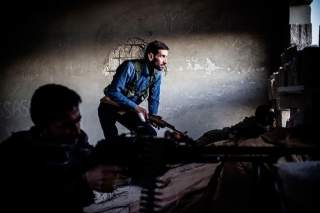 Last Thursday, Secretary of State Rex Tillerson announced that “there would be no role” for Bashar al-Assad “to govern the Syrian people,” and that steps are underway to assemble an international coalition to remove him from power.

Five days and one cruise-missile strike later, he remarked in Moscow, “The reign of the Assad family is coming to an end.”

These statements marked an abrupt about-face in more ways than one. Washington had just a week earlier signaled it would accept Assad’s rule over Syria. During his election campaign, President Trump had argued that the United States needed Middle East autocrats to keep order in the Middle East and shouldn’t allow human-rights considerations to influence foreign policy. However, the apparent use of sarin gas by government forces against an opposition-held town on April 4 led to a change of heart—especially given that Syria was supposed to have handed over all of its chemical-weapon stocks for destruction in accordance with an agreement brokered by Russia in 2013.

However, just as surprising was the blithe assertion that a regime that recently won a major military victory and seems to be reconsolidating its power would somehow be easily subject to Washington’s changing whims. Was the Syrian dictator truly just a few steps away from being removed from power? Did the new administration have some subtle grasp of Middle East politics, some secret diplomatic weapon that could swiftly accomplish what six years of anti-Assad policy under Obama could not?

Of course not. These remarks are at best bluster. At worst, they reflect the mistaken belief that the administration’s self-professed deal-making ability and warm regard for Putin (at least formerly!) will somehow persuade Moscow to abandon a foreign-policy project it is deeply committed to.

Since the Russian intervention began in September 2015, Assad’s forces have slowly, though not steadily, gained ground. Government troops suffered setbacks when faced with a rebel counterattack in Aleppo the summer of 2016 and an ISIS counteroffensive in Palmyra. However, the recent fall of the rebel stronghold in eastern Aleppo marked a decisive victory for the regime. Assad’s troops have also consolidated their supply lines, leaving fewer isolated outposts ripe for plucking than there were a few years back.

Pointing out the facts on the ground is no excuse for Assad’s murderous acts. His forces, and those of his allies, have relied on indiscriminate use of heavy artillery and aerial bombardment directed as much on the civilian population as enemy fighters. However, this does not change the reality that he has bludgeoned most of the major cities in Syria back under his control.

Assad’s waning fortunes may be less immediately apparent because his forces are in poor shape after six years of constant fighting, with the Syrian Arab Army reduced to a skeleton of its former strength. He now heavily relies on a motley patchwork of National Defense Forces (pro-government militias), Hezbollah fighters, private armies financed by business associates, Iraqi Shia volunteers, and Iranian and Russian troops. Were the fighting to magically end tomorrow, the Syrian state would struggle to govern the battered remnants of the nation and rebuild national unity. Assad is prevailing because his opponents are either faltering or preoccupied with other adversaries.

The War against ISIS Has Covered Assad’s Flanks

ISIS controls much of eastern Syria, although a lot of that territory is made of up of sparsely populated desert. Nonetheless, ISIS forces centered around their de-facto capital in Raqqa pose yet another threat to the Assad regime. In the last year of fighting, a fractious coalition of Turkish troops, Kurdish fighters and U.S. special forces benefiting from heavy U.S. air support has managed to drive ISIS away from the Turkish border. Kurdish and allied Arab forces are now moving into position to surround and besieged Raqqa, although it may be a while before those forces are strong enough to capture the city.

U.S. pressure on ISIS has allowed Assad and his Russian fire support to concentrate their efforts against the other rebel factions, all the while boasting that they are taking on ISIS. In the world sketched out by the propagandists in Damascus and Moscow, all of the Syrian rebels might as well belong to ISIS, and criticism of the Syrian regime is equated with support for terrorism.

The non-ISIS opposition in Syria has suffered several major defeats. The rebels in Aleppo have fallen back into a large pocket centered on Idlib Province, which remains under constant government bombardment. In December 2015, the last defenders of the rebel stronghold in Homs were also allowed to withdraw under a truce. Besides Idlib, there remain significant pockets of opposition-held territory north of Homs, the southern border and along Ghouta Road in eastern Damascus.

With their territory fragmented and no obvious sources of game-changing foreign intervention in sight, it’s hard to see how rebel groups can reverse their declining fortunes. Furthermore, while the opposition has always included liberal secular factions that would have been amenable to Western governments, the unfortunate reality is that the radical groups have received more generous assistance from Middle East governments and swelled in their influence over time. Today, the largest faction is the Tahrir al-Sham alliance, which has the Al Qaeda–associated group formerly known as Nusra at its core. The politically divided opposition groups have been forced to fight together out of pragmatic considerations, and it would be unfair to claim they are all equally radical. The point remains that many of the rebel groups are politically unpalatable to Western governments.

After the Obama administration’s attempt to train and arm moderate Syrian rebels failed spectacularly, it should be clear that an injection of heavy weapons will not turn the tide in Syria, and that the ranks of rebel groups politically acceptable to Washington are thin. If Tillerson were somehow to succeed in in transitioning Assad out of power in Syria, he would likely have to work to bypass the influence of the radicals among their ranks.

Kurdish separatists are focused on fighting ISIS—quite understandably, as the terrorist group has repeatedly demonstrated its genocidal intentions towards minorities. The Kurdish fighters have benefited from very close support from American troops and warplanes, making theirs the most secure “opposition-held” territory. However, this is because Assad’s troops are mostly leaving them alone. Ultimately, the Kurdish goal is to carve out a separate Rojava homeland for themselves, not overthrow the government in Damascus.

Of course, Assad is not in love with the idea of the Kurds taking a bite out of his territory, and Kurdish and Syrian troops have occasionally clashed. He has, however, pragmatically focused on eradicating the opposition groups that pose a more direct threat to his power. Conceivably, he may turn his guns against the Kurds once he has sufficiently suppressed the rest of the opposition. Until then, he will be content to allow Kurdish militias to tackle ISIS and divert Turkey’s attention.

Therefore, while Kurdish fighters and their moderate Arab allies have served as Washington’s most effective partners on the ground in Syria, they will not be easily used as tools to pressure Assad.

Assad Calls on Iran for Support as Well as Russia

Many observers forget that Iran and Hezbollah committed thousands of troops to the fight in Syria well before Russia arrived. While their intervention was not sufficient to win the war by itself, it surely staved off the collapse of the Assad regime. Iranian Revolutionary Guard Corps operators and Basij paramilitaries continue to play an important role in leading and training the ragtag forces fighting on behalf of the Syrian government.

Moscow and Tehran are mostly cooperating on their campaigns in Syria, though naturally their interests are not identical. Moscow may hold a more pragmatic attitude to ceding parts of the country to rebel control in order to secure Assad’s hold on power, while Iran holds more maximalist views on asserting Syrian sovereignty and may perceive Assad as expendable. The Syrian government is divided internally over which faction to follow, and there were rumors that an Iranian attempted coup was blocked by the Russian faction in January.

Nonetheless, even if Tillerson were to somehow reach an understanding with Putin on transitioning Assad out of power, Assad might draw on support from conservatives in Tehran to resist pressure from Moscow. And to be clear, Moscow is not going to give up on keeping a friendly government in Damascus that will secure its bases in Syria—a symbolic military victory on the world stage. Such a government might not strictly require the presence of Assad as head of state—but Assad has a “vote” on the matter, and who is poised to take his place?

In fact, the gravest threat to the Syrian dictator’s hold on power might come from a coup orchestrated by a regime official who believes he can present himself as a politically acceptable alternative to Assad while remaining in the good graces of either of Syria’s patrons. Of course, the prospects for such a turn of events may be hard to judge until after the fact, and Tehran and Moscow may not trust that a coup leader could truly muster the same loyalty as Assad currently does.

In any event, it’s less than obvious what kind of pressure the United States can exert against the Syrian government without resorting to further military intervention—an option Tillerson has intimated is not on the table. The Syrian government has remained a pariah in the West and among the Sunni Arab states in the Middle East for years, and can hardly be isolated more from either. Ankara, which is charting its own increasingly authoritarian path in increasing divergence with the West, has actually become more amenable to Assad and Putin, not less.

Perhaps Tillerson has some truly creative diplomatic solutions up his sleeve and can draw upon untapped reservoirs of goodwill and leverage that will untie the ever so tangled diplomatic knot in Syria. Until there is evidence to this effect, his assertions that the United States will easily shift Assad out of power ring as weirdly removed from reality.