Atlantic Trident 17: How America, Britain and France Are Preparing for the Wars of the Future 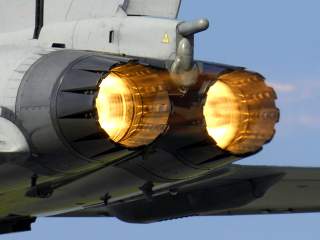 The war games bring together the elite pilots of the U.S. Air Force’s 1st Fighter Wing and their Lockheed Martin F-22 Raptors with the F-35A Joint Strike Fighter, the British Royal Air Force’s Eurofighter Typhoons and the French Armée de l'Air’s Dassault Rafales. The idea behind the exercise is to afford the three leading NATO air forces the opportunity to train together to defeat advanced anti-access/area denial (A2/AD) threats that are backed by modern adversary air power.

“We’ve been side-by-side together, the Brits, the French and the Americans in air combat,” 1st Fighter Wing commander, Col. Peter Fesler, said. “This exercise is an extension of that. I think this is an opportunity for us to continue to refine our skills, our tactics, techniques and procedures to fight the war that we all know is coming. We don’t know where, we don’t know when; but we know it’s coming, and we’ve got to be ready to fight together.”

As such, for the past week, the U.S. Air Force’s F-22 Raptors and F-35As have been flying combat training missions alongside the Royal Air Force and the Armée de l'Air as part of an effort to develop tactics, techniques and procedures to defeat adversaries around the world. Those threat range from advanced air defenses such as the Russian-made S-400 and S-300V4 to the Chinese HQ-9 surface-to-air missile defense systems. “The nature of A2AD missions provide a highly-contested environment where adversaries have the upper-hand, creating barriers that limit U.S. and allied efforts,” an Air Force statement reads.

Moreover, allied forces are also increasingly faced with the prospect of going up against advanced enemy fourth-generation fighters such as the highly capable Russian-made Sukhoi Su-30 Flanker and its various derivatives that have proliferated around the globe. To replicate some of the advanced air threats that the allies might faceoff against, the Air Force has brought in Boeing F-15E Strike Eagles from the 391st Fighter Squadron and Northrop Grumman T-38 Talon jet trainers from the 1st Fighter Wing’s own 71st Fighter Training Squadron to play the part of “Red Air”—or the bad guys.

Next week, The National Interest will bring our readers onsite coverage of Atlantic Trident 17 from the cockpit of one the 71st Fighter Training Squadron’s T-38s if all goes as planned. Stay tuned.