Australia’s Big Submarine Debate: The Case for an On-Shore Build 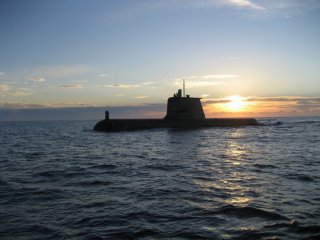 Pressure on the three contenders for Australia’s future submarine contract is mounting. At issue is their readiness to build all or part of the next fleet in Australia—assuaging the political vulnerabilities of the Abbott government. The imperative for an on-shore build is more than just political, however. Australia’s naval capability and economic stability depend on it.

Building overseas would strike a blow to Australia’s sovereign capability. The reason lies in the inextricable link between data ownership and both submarine sustainment and national capability to upgrade the submarine system: control over and understanding of the intellectual property is essential for a naval power to retain capability.

Yet the maintenance of sovereign capability has to be non-negotiable if Australia is to invest its $20 billion wisely. Value for money is also an imperative—upheld in Commonwealth procurement legislation designed to deliver the best return on taxpayer dollars.

The economic benefits of an on-shore build are well documented, with one model predicting that the Australian economy would be $21 billion better off. While the model’s methodology has been questioned, this debate has been largely theoretical.

The economic impact of an offshore build remains undeniable. Paying $20 billion to an offshore manufacturer will have an impact on Australia’s economy. When multiplier and spillover effects are taken into account, the impact is greater still.

Multiplier effects arise from both the need for sub suppliers (i.e. one job in the prime generates several jobs at sub suppliers) and the value of every dollar spent, as currency circulates through an economy. A dollar in wages becomes a dollar in consumer spending.

Spillover effects arise from knowledge, skills and capabilities that are spread across the economy following a complex manufacturing process. The more complex the system, the greater the opportunity for spillovers, generating exportable innovation. Since submarines are three times more complex than surface combatants in terms of their design, construction and sustainment, the spillover effects are higher. The benefits not only have impact on the shipbuilding sector, they generate highly skilled workers in engineering, IT and manufacturing.

Sending $20 billion overseas for an offshore build would remove $20 billion from the economy. In contrast, investing the same amount on-shore would deliver a multi-billion dollar return in terms of innovation, exports and employment.

Australia prides itself on its innovation. A hybrid build on-shore, in collaboration with an overseas manufacturer, is one way to ensure that new skills, intellectual property and technology are acquired and retained. It makes no sense to relinquish those assets to another nation, jeopardizing thousands of jobs.

Given current economic conditions, the need for investment at home to create job opportunities into the future is all the more urgent. Commodity prices have fallen, unemployment has increased.

Now is the time to extract guarantees from the three contenders. Germany’s TKMS has said it could turn Australia into a regional submarine industry hub for Asia, by building the next fleet here. The region is entering a phase of expansion in terms of submarine acquisition and sustainment, with naval powers competing to maintain parity.

Singapore is buying submarines from Germany to complement their upgraded submarines from Sweden; Vietnam is buying from Russia; Indonesia is buying from South Korea. Thailand is expected to buy from China, while Malaysia has bought from France. Australia’s challenge, and opportunity, is to identify how its own fleet can compete, while ensuring that any tactical advantage benefits both its economy and defense. Notably, the Taiwanese have decided to build their own submarines for this very reason: recognizing the link between defense, employment and skills retention.

France’s DCNS says it sees no barrier to building in Australia and has also pledged to share intellectual property in a bid to offer Australia control over capability. DCNS is also offering a logical path to a future potentially nuclear powered submarine fleet.

Japan’s Kawasaki Heavy Industries and Mitsubishi Heavy Industries, which is widely expected to win the contract, has also pledged to hand over data (although it is rumored that they are unwilling to hand over the most advanced and latest submarine technology). But when it comes to a domestic build in Australia, the Japanese remain cautious, doubting that Australia lacks the technology—in particular the materials manufacturing expertise—to contribute to the project successfully.

Recognizing that an off-shore build would cause political upheaval—as warned by South Australian Senator Nick Xenophon during his recent visit—Japan is now exploring other options including collaboration with an international partner. One of several partners under consideration is Saab, another is BAE.

As the debate currently stands, the federal government can’t afford to spend billions of dollars on the next submarine fleet—and gamble its prospects at the next election—without providing firmer guarantees regarding jobs, naval capability and economic security. After making its promises on submarine jobs, the government should explain how it proposes to keep its word.

This piece first appeared in ASPI's The Strageist here.