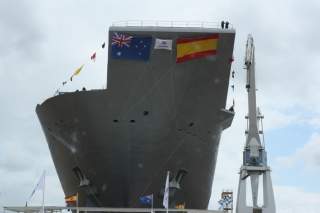 Australia is set to begin testing its second Canberra-class Amphibious Assault Ship (LHD), which is also known as a helicopter landing ship.

In a statement, BAE, which helped build the ship, said that the NUSHIP Adelaide, the second of two planned Canberra-class LHDs the Royal Australian Navy is building, left port in Williamstown to begin sea trials.

“We will undertake approximately 240 hours of testing over 20 days to ensure all systems perform to their capability. Some of the trials will run concurrently and cover everything from basic systems operations such as alarms, to the ship’s manoeuvrability while at sea,” Bill Saltzer, BAE Systems Director of Maritime, said in the statement.

The ship will first travel to Sydney where it will dry docked in order to clean and paint its hull and flight deck. It will then travel back to Williamstown, arriving sometime in mid-July. Later, in August, the Adelaide will undergo a second set of sea trials, which will focus on its communication and combat systems.

“We are on track to deliver NUSHIP Adelaide at the end of September this year,” Saltzer said.

Adelaide will be the second CAnberra-class LHD that the Royal Australian Navy receives after the first, HMAS Canberra, was commissioned in November of last year.

Displacing 12,000 tons, the Canberra-class amphibious assault ships are the largest warships ever built for the Australian Royal Navy. Calling the ships “one of the most capable and sophisticated air-land-sea amphibious deployment systems in the world,” the Australian Navy notes “hese 27,000 tonne ships will be able to land a force of over 1,000 personnel by helicopter and watercraft, along with all their weapons, ammunition, vehicles and stores.”

As this suggests, the Canberra-class LHDs will greatly enhance Australia’s ability to project power in the massive waters surrounding the country. Their commissioning comes at a time when tensions are rising in the South China Sea owing to greater Beijing assertiveness.

Australia has vowed to continue patrols in the South China Sea despite Chinese pressure. In an interview with the Wall Street Journal last month, Defense Minister Kevin Andrews said, “We’ve been doing it for decades, we’re doing it currently…and we’ll continue to do it into the future.”

He added: “We don’t see there’ll be any change to that operation. It’s been a long-term operation and it’s been well known by all the countries in the region.”

The ships can also be used in humanitarian rescue and disaster response missions.