Australia and India: A Nuclear Alliance? 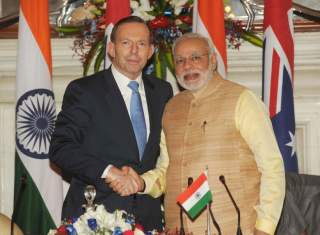 Recently Australian Prime Minister Tony Abbott signed a nuclear safeguards agreement with India, allowing Australia for the first time to export uranium to India for civil nuclear purposes. The agreement is touted as a win for Australia’s small uranium sector and a needed step towards improving Australia–India relations. India’s refusal to sign the NPT constrained relations for decades. It’s widely understood that the uranium deal is more directly related to diplomacy than boosting Australia’s mining sector, so what’s next now that the safeguards agreement has been signed?

The uranium deal is first and foremost a diplomatic gesture meant to jumpstart Australia’s broader engagement with India. Both countries share an interest in Indian Ocean maritime security and bilateral military relations can be built around that common interest. We should expect to see strengthened dialogue between India and Australia on security issues. And we can expect that more joint military exercises and military-to-military exchanges will also be announced. A bilateral naval exercise is already scheduled for 2015.

There’s also potential for increased economic engagement between Australia and India. Trade Minister Andrew Robb plans to lead a business delegation of 300 to India early next year. Australia recognizes a need to diversify its trade partners, and bilateral trade with India trails far behind that with other major Asian partners. India could become a large-scale market for Australian goods and services. And its surging need for energy security coupled with Australia’s competitive advantage in energy-supply potentially makes for a strong partnership. In the short term, we can expect coal to continue to be a significant export and later LNG will emerge to fuel India’s economy.

Although this agreement will spark some optimism in the struggling uranium business, it won’t make anyone rich anytime soon. Uranium prices are extremely weak due to decreased global demand in the wake of the Fukushima disaster in Japan and there’s a global excess of supply. Although Australia’s known resources are the world’s largest, uranium’s only a small part of Australia’s massive mining sector.

There’s been some concern that the uranium will be used not just for civil purposes. That’s a point of controversy given concerns about India’s nuclear arsenal. However, this June India signed the additional protocol with the International Atomic Energy Agency (IAEA) placing its ten reactors under the agency’s safeguards. That agreement also allows inspectors into the country and requires India to report to the IAEA all uranium within its control that is redirected for export to a third-party country. Australia also has its own watchdog, the Australian Safeguards and Non-Proliferation Office (ASNO). To ensure Australian uranium isn’t used for military purposes, ASNO accounts for it as it moves through the fuel cycle. India will be obliged to report to ASNO on the uses of uranium purchased from Australia.

While Australia can’t be completely certain uranium will never be diverted for military use, India knows there would be serious diplomatic consequences if it was discovered that such diversion had occurred.

The nuclear safeguards agreement is a diplomatic tool meant to build trust with India and move bilateral ties forward. As an economic tool, it’s a forward-looking measure to supplement India’s energy needs with Australian resources.

Kyle Springer is the program associate at the new Perth US Asia Centre at The University of Western Australia. This piece first appeared in ASPI’s The Strategist here.

Image: Office of the PM, India.