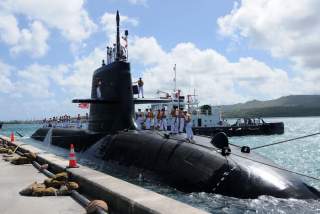 In their paper supporting Option J, Andrew Davies and Benjamin Schreer don’t just rebut some of the strategic arguments raised against it, but also provide their own argument on strategic grounds in its favor. Their rebuttals offer much to debate, but their positive argument is more important and more revealing, so let’s focus on that.

The argument is essentially as follows. Australia’s interests are best served by the creation of a strong coalition of democracies that would preserve the US-led order in Asia by resisting China’s growing power and ambition. Creating this coalition requires a more strategically-active Japan and closer US-Japan-Australia strategic cooperation, both of which would be encouraged by Australia buying Japanese submarines.

Underlying this argument is an assumption that Australia’s future security is best served by trying to perpetuate the US-led order which has kept Asia stable for 40 years. There’s no doubt this would be the best outcome if it can be achieved, but for that to happen, China must be either convinced or compelled to abandon any ambitions to change that order and take a bigger leadership role for itself. The strategic policies of Washington, Tokyo and Canberra today all presuppose that Beijing will back off if they stand together and firmly refuse any concessions to these ambitions.

The more confident one is that this is right, the more credible the assumptions underlying Ben and Andrew’s strategic argument for Option J becomes. But Ben and Andrew offer no support for their assumptions, and, as I have argued elsewhere, there are compelling reasons to suggest that they are wrong. If so, then the present policies will not preserve Asia’s peace and Australia’s security, but lead instead to an escalating rivalry and an increased danger of major war. And in that case, Option J would undermine Australia’s security by deepening our support of US and Japanese policies which are not in our interests.

Moreover, if Andrew and Ben are wrong and China can’t be forced to accept the old order, then we face a strategic future in Asia, which, one way or the other, will be very different from what we have known. Whichever of the wide range of possible outcomes materializes, it’s quite likely that the strategic interests of both Australia and Japan won’t remain nearly as closely aligned as Andrew and Ben believe them to be today.

This matters to the submarine project to the extent that our future submarine capability under Option J would depend on maintaining a close strategic relationship with Japan. Andrew and Ben argue that it wouldn’t, because we wouldn’t depend on Japan’s cooperation to support and operate our boats provided that we secured the technical information to allow us it do it ourselves.

But how confident can we be of that? As Ben and Andrew acknowledge, both Tokyo and Canberra seem to expect that despite the so-called "competitive evaluation process", Option J, if it proceeds, would be based on a government-to-government deal. It’s very clear that this would lead to the details of the deal being hammered out in a non-competitive, sole-source negotiation in which Australia would have a very weak bargaining position, with little leverage to press for the transfer of sensitive technical information.

And we can be sure the Japanese side would be determined to transfer as little of that information as possible, not just to protect the operational security of their own submarine capability, but also to maximize our dependence on Japanese submarine support.

After all, why is Tokyo is so keen on Option J, when the commercial incentives are fairly modest and the potential risks of sharing its most sensitive military technology seem so high? The clearest reason is that Abe wants to use Option J to tie Australia as closely as possible to Japan strategically. He will therefore have strong incentives to keep Australia’s submarine capability as dependent as possible on Japan, and hence, to share as little information with us as he can.

So there’s a serious risk that Option J would leave our submarine capability vulnerable to future differences in Australian and Japanese strategic priorities. Moreover, that risk is highest in precisely those circumstances in which Australia’s submarines would be most important to us. The bigger the shifts on the region’s strategic order, the more we’ll rely on our submarine capability, and the bigger than risk that strategic differences between us and Japan will undermine it.

There’s no risk-free way to buy submarines, but Option J carries whole categories of strategic risk that the other options do not, and those are very likely indeed to outweigh the technical advantages, if any, that Option J offers.