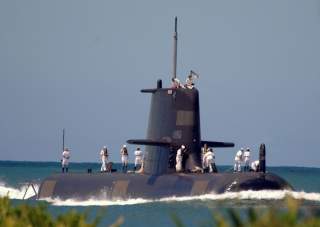 Germany’s bid for Australia’s SEA 1000 Future Submarine project could reasonably be described as coming from a safe pair of hands.

Since 1960, ThyssenKrupp Marine Systems (TKMS) through its Howaldwerke-Deutsche Werft (HDW) subsidiary has delivered 161 diesel-electric submarines to 20 navies. Of this total, 123 have been built for international customers —including six NATO navies—51 of them in South Korea, Turkey, Greece and Brazil.

All have been built to fixed price contracts, a model which clearly works otherwise, as noted by TKMS Board member Torsten Konker “we’d be broke.”

Notwithstanding the company’s experience, TKMS has yet to construct a submarine in the 4,000 tons range that’s generally regarded as the size needed to meet Australia’s requirements.

That isn’t seen as a problem by TKMS, whose designs have steadily grown in size and capability to meet customers’ specifications.

Such an evolutionary approach, based on the consistent use of the same design philosophy, is apparent in the Type 216 reference design on which the company’s SEA 1000 proposal is based.

Predicated on a 4,345 tons (submerged displacement) platform but designed to be scaled up or down, the Type 216 is 89 meters long with a hull diameter of 8.1 meters, two pressure-tight compartments, and a two-deck layout.

At the heart of the boat is a propulsion system that employs a methanol reformer air independent propulsion (AIP) system to achieve a submerged range without snorkeling of 2,600 nautical miles (4,815 km) at four knots, assisted by lithium ion batteries as a supplementary energy source.

Snorkeling under diesel electric power at 10 knots adds a further 10,400 nautical miles (19,260 km), during which the indiscretion rate—the percentage of time during which the snorkel is raised—is less than 20%.

Overall endurance is about 80 days during which, according to unofficial but informed sources, a submerged AIP period could, if required, exceed more than 20 days. By contrast, Collins boats have no AIP and their endurance without snorkeling is understood to be about three days.

While a 33-strong crew would be sufficient to man and operate the Type 216, 60 bunks will be provided to meet Navy’s requirements that presumably include accommodation for embarked special forces; a gym area can be included for crew wellbeing.

The Type 216 design provides space for up to 18 heavyweight torpedoes or a mix of weapons that could include missiles and mines, fired through six bow tubes.

The design also provides an option for an innovative vertical multi-purpose lock just aft of the sail for cruise missiles, unmanned systems or divers, together with pressure-tight containers inside the aft and forward casing for torpedo countermeasures systems and garaging of unmanned aerial vehicles.

An intercept detection, ranging sonar and a new conformal array sonar in the bow are included in the sensor suite, as are an expanded flank array incorporating passive ranging, an aft sonar array, a towed array and underwater cameras.

The 2,200 tons Dolphin II class now in service with Israel—and reputedly nuclear-armed—is the largest submarine yet produced by TKMS. Two variants known as the Type 218SG are reliably reported to have been ordered by Singapore with delivery expected in 2020.

Scaling up a pressure hull is assessed as low risk, entailing as it does the same hull material, the same calculation systematics and engineering tools, the same stealth calculations and design, the same underlying layout parameters, and the same degree of quality assurance and documentation.

The design risk is therefore in the reliability and integration of systems and subsystems, of which TKMS says more than 80% are already at sea in the company’s Type 214.

Obviously these don’t include the AN/BYG-1(V) combat management system and the Mk48 Mod 7 CBASS heavyweight torpedo that equips the Collins-class and are mandated for its successor.  Nor are they likely to include several RAN-specified underwater and surface sensors.

Yet capabilities even within a given class can vary widely depending on the requirements, skills and presumably the pockets of the operators, and TKMS says that the integration of diverse systems and the handling of sensitive information is a well-established part of its normal business.

Close engagement with the Israeli Navy on a variety of systems had seen the Dolphin II—arguably the company’s most capable type to date—“emerge as a unique submarine that precisely meets their needs.”

A $20 billion offer by the parent company to deliver 12 Type 216-based submarines built in Germany, Australia or a mix of both, had been based on RAN’s anticipated top-level requirements, Dr. John White, chairman of the Melbourne-based subsidiary TKMS Australia (TKMSA), clarified to the Senate Economics References Committee in July.

Although the actual requirements had since been made available, the comparative evaluation process  (CEP) involving all three SEA 1000 contenders wouldn’t be long enough to produce a revised figure.

Both Defense Minister Kevin Andrews and Navy chief Tim Barrett have visited the sprawling TKMS shipyard in Kiel, where Andrews saw nine submarines either under construction, refit or repair.

A subsequent paper was prepared at Andrews’ request predicting the additional facilities and expertise required at ASC should the Type 216 be constructed there under TKMS management. This paper was also copied to and discussed with Finance Minister Mathias Cormann.

Dr. White, head of the successful 1990s ANZAC frigate program, told the Senate committee that as with all complex infrastructure projects, including SEA 1000, when done properly the most efficient, lowest cost option was to engineer and plan from the very beginning for building all boats in Australia.

TKMS would also provide options for building all or some boats in Germany as requested in the CEP. If selected, the company would follow the ANZAC model and utilize multiple sites to make best use of the skilled labor located around Australia.

Perhaps surprisingly, Dr. White disclosed that TKMS would find it difficult to achieve a continuous build from eight submarines—the number on which current speculation is centered—even if planned refits and potential upgrades were included in the time frame.

Since time is money, it wouldn’t be prudent to achieve a continuous build process simply by extending the build schedule.