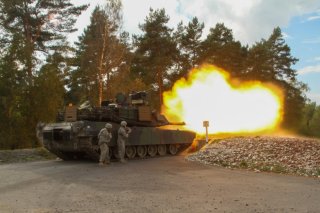 As bombs and missiles have begun to drop in ISIS strongholds in northern Syria, military experts are warning that the air campaign will be measured in months, if not years, and that a ground campaign must certainly follow.  President Obama said as much in his address announcing the commencement of the campaign against the IS.

The Obama plan cannot be considered a strategy yet--significant pieces are missing. It was formed as much if not more so from domestic political realities and those constraints rather than what is necessary to defeat the IS.  It is in part why there are two separate, though complementary, missions to destroy the IS in Iraq and to degrade it in Syria.

Destruction of the IS cannot be done by airpower alone, and there are some questions of how much of it can be degraded by airstrikes. In this context, air power can be likened to trying to swat a pesky fly with a hammer – but given the number of flies and their geographic spread, an area the size of the United Kingdom, this can be a wearisome and lengthy process.

Based on how many sorties were flown over Libya, we can surely expect the air campaign to last between six months to well over a year and that was with a proxy ground force provided by the National Transition Council.  There is no such ground force in Syria or even in Iraq and so we are once again facing a long war.

Above all it is the duration of our engagements overseas, the years in Iraq and Afghanistan without satisfactory conclusions, and the billions that were spent, that have soured western publics to any sort of overseas military engagements, especially those which feature the commitment of ground forces.

Facing the threat that the Islamic State evinces--with its beheadings, its pre-medieval use of crucifixions, the purposeful elimination of non-adherents in their midst and the subjugation of what remains to servitude--has galvanized nations and people to act, notwithstanding their visceral reluctance to do so. People understand that the IS, wrapped in a cocoon of quasi-statehood represents a danger if left untouched.

In response, a coalition that includes Arab states, puts an end to the question “why it’s always only us”.  The participation of regional Sunni states is helping defy the narrative that it is the West against Islam.

However, military action is not inexpensive. The estimates from the United States are that this will cost between seven to ten million dollars a day, or $3.6bn dollars a year, not including contributing nation costs.

Unlike the Second World War, where spending supported mobilization and increased hiring, modern wars do not produce the same economic effect and  monies spent on long wars could be directed for more productive uses.

President Eisenhower in his famous parting speech said: “Every gun that is made, every warship launched, every rocket fired signifies, in the final sense, a theft from those who hunger and are not fed, those who are cold and are not clothed.”

Beyond fiscal cost, there is a further societal cost to consider at home.

In the 19th century, Robert E. Lee opined that warfare should be fierce lest we grow too fond of it.  A century later in 2004, the historian Niall Ferguson was struck by the festive atmosphere in Las Vegas, while the U.S. Army was slogging it out in Iraq. Video of antiseptic, high tech missile strikes, mesmerizing us with their precision will become part of our daily fare of news, in a similar fashion to the day’s box scores and traffic reports. It is Orwellian in its imagery, where a society is in perpetual war but disengaged from it.  Along with that separation is the inescapable reality that prolonged war produces a drain on the national spirit the longer that conflict endures.

This is not an argument to avoid going to war against ISIS, in fact it is quite the opposite.

The quicker ISIS can be decisively degraded if not destroyed the better.  This requires a punishing air campaign coupled with a ground force follow up. Instead of one hammer employ many and end this military intervention quickly.

The air campaign, appears to be under-resourced compared to what established the winning conditions for Desert Storm for example; as if the coalition is hoping that precision will replace the persistent coverage that only mass can provide.  While an air campaign answers the public perception of action it cannot fully succeed on its own.   That is exactly what coalition leaders must openly discuss and confront.

The Obama plan recognizes the need for a ground campaign; It is short on detail on who will do that making this only a plan at the moment and not a strategy.

The mainly conventional nature of the ISIS enemy, the terrain and, a long secure allied border with Turkey mean that a ground campaign could be conducted with lighting speed.

In Gulf War One the air campaign lasted five weeks, and the ground operation liberating Kuwait was completed in 100 hours.  The point being that success is possible if aims are limited to the destruction of the IS, and not a mission to establish government or re-establish civil society by military means.

The end of conflict in Gulf War One is also instructive, as there was no “complicated” exit strategy.  When Kuwait was liberated, the troops came home.  Limited objectives, clear goals and a short war are the lessons to be drawn.

Two divisions, of a well-led modern mechanised force preferably US led that would not exceed 50,000 should have no difficulty advancing North on a Baghdad,  Mosul axis, then swinging west driving to Lake al Assad as its limit of exploitation.

Its left boundary, once in Syria, would be the Euphrates River, north of which is exclusively the IS domain.  The Turks, whose border runs across the entire line of advance would be enjoined to provide secure basing for the logistics effort, and holding attacks along the length of those borders.

That sweep, would provide Turkey the buffer zone that they have long argued for and they can be asked to man it under a UN mandate in effect reducing the creation of newly displaced and facilitating humanitarian aid delivery.

That alone is not enough and international pressure must be maintained for the creation of inclusive governments in the region.  Without the sharing of real power in Baghdad, the Sunni’s will have every reason to distrust both the current regime and the US.  In Syria, the faster the IS is destroyed, the less Assad will benefit and the Free Syrian Army might have a chance to concentrate instead of fighting a two front war – one against Assad, another against the IS.

It is important to remember how we got here in the first place and understand it to avoid another re-dux; that being the very delicate matter of the Sunnis in Iraq.

The roots of the IS were spawned in the Sunni suppression and its subsequent marginalization soon after the Iraq invasion.  When repaired by extraordinary US efforts during the surge, gains were squandered by a Iraqi government, in the absence of a US presence, that re-fomented sectarian divides further marginalizing the Sunnis; resulting inter-alia in an Iraqi army that could no longer fight despite the billions spent on creating it.

In Syria, as civil demonstrations against Bashar al Assad became a rebellion and then a full-fledged civil war, the United States and the West had nothing to offer except words.  International “Red Lines”, proved to be nothing more than posturing, adding to a long list of missed opportunities where what might have emerged as a moderate opposition with western support quickly became overrun and divided by fundamentalists.

Between those two tinder boxes, ISIS, and the IS was born.

To simply bomb the ISIS over the course of a year without becoming diplomatically engaged in resolving the baseline issue of Sunni marginalization in Iraq and Syria will only create another ISIS down the road. In both Syria and Iraq, a positive outcome is only achieved, if IS is rapidly defeated and only then, will there also be an opportunity for humanitarian aid to freely flow.

To avoid the results experienced by the west over the last decade ; the most obvious of these being that “Long Wars with unclear purpose are not good.”  Use decisive military force, including land power, now--to bring ISIS to an end, to avoid a prolonged conflict and further human suffering.

George Petrolekas is on the Board of Directors of the CDA Institute and co-author of the 2013 and 2014 Strategic Outlook for Canada. Mr. Petrolekas served with NATO, in Bosnia, and Afghanistan and as an advisor to senior NATO commanders.

Howard Coombs is a professor of military history and war studies at the Royal Military College of Canada. The opinions expressed are their own.