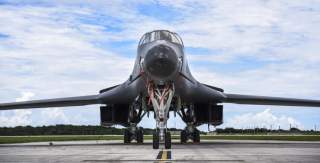 Talk about unusual. On Aug. 10, the U.S. Air Force announced it had sent its B-2 Spirit stealth bombers to join older, non-stealthy B-52 Stratofortresses and B-1 Lancers on Guam.

It’s an extraordinary show of force in the Pacific region, because for the first time ever, America has based all three heavy bomber types on the island at once.

Deborah Lee James, the Air Force secretary, described the deployments as providing a “valuable opportunity for our bomber crews to integrate and train together, as well as with our allies and partners through the region in a variety of missions.”

But James did not elaborate on just how unusual the arrangement actually is, nor did she expand on any deeper possible reasons for basing Spirits, Lancers and Stratofortresses at the same base at same time — all within striking distance of China and North Korea.

To be sure, the Pentagon regularly deploys far-reaching bombers to Andersen Air Force Base. However, North Korean nuclear and missile tests, Beijing’s expansionism in the South China Sea and the U.S. Air Force’s own plans to buy new, long-range weapons have given new weight to these deployments.

The latest deployment began on Aug. 6 when a group of B-1s arrived at Guam to take over from the B-52s. These aircraft were part of what the Pentagon calls the “Continuous Bomber Presence” mission, or CBP. The B-52s will head back to the continental United States at the end of August.

On Aug. 10, the B-2s landed for a separate but similar “bomber assurance and deterrence deployment,” or BAAD. We don’t know when the stealth bombers and their crews will return home to their base in Missouri.

Each bomber is considerably different from each other. The sleek B-1 can fly faster than the speed of sound while lugging nearly 40 tons of bombs in three internal weapons bays. The jet has a maximum range of nearly 6,000 miles.

The massive B-52 Stratofortress, however, flies much slower with a slightly smaller bomb load, but can travel almost 3,000 miles farther before needing to land. The B-2 Spirit holds much less ordnance, but the unique flying wing shape and other stealth features makes it virtually invisible to enemy radar.

Historically, both the CBP and BAAD missions have been linked to North Korean saber rattling.

On Jan. 29, 2002, then-president George W. Bush famously grouped the reclusive regime together with Iraq and Iran as the “Axis of Evil.” More than a year later, the Air Force sent two dozen B-1s and B-52s to Guam to form a new bomber wing at the base. In 2004, this wing took over the CBP mission.

The initial deployment “during spring 2003 was the first glimmer that a new bomber era was dawning at Andersen,” historians for the base’s 36th Wing wrote in a overview of operations from 2004 to 2006. “Parallels exist between the current bomber situation and Andersen’s heyday as a bomber base.”

War Is Boring obtained a copy of this historical review via the Freedom of Information Act.

During the Cold War, the United States based nuclear-armed B-52 bombers on Guam in case of war with the Soviet Union or China. While those wars thankfully never broke out, during the Vietnam War the lumbering Stratofortresses flew from the remote base to drop conventional bombs.

The newly arrived bombers in the 2000s practiced for a similarly wide range of missions — and war games from Australia and Alaska to Hawaii and the East China Sea. The Air Force gave the training flights colorful nicknames such as “Blue Lightning” and “Polar Lightning.”

Between August and September 2004, the aircraft took part in one of the massive annual war games the Pentagon runs with its counterparts in South Korea. Three months later, troops on the ground called in mock B-52 strikes based in part on information scooped up by U-2 spy planes, according to the 36th Wing history.

Separately, BAAD was supposed to provide similar shows of force on world-wide level. Still, the Pacific theater seemed to present some of the most likely potential threats.

However, Washington did send bombers on routine trips to the Middle East to show their displeasure of Iran’s nuclear program. After Russia invaded Ukraine’s Crimea region in February 2014, the flying branch began sending more and more B-52s for practice sessions in Europe.

But fast forward to the present and the Air Force clearly sees the Pacific as one of the most important domain for bombers. During an Aug. 10 press conference at the Pentagon, Gen. David Goldfein — the Air Force chief of staff — told a reporter he couldn’t imagine a similar situation happening at a base in the Middle East or Central Asia.

“I say that only based on what the bomber contributes to the joint fight,” said Goldfein, who previously ran the Air Force’s top command in the Middle East from 2011 to 2013. “I don’t see in the current operational tempo the requirement for more than one bomber squadron to be there at one time.”

In the past, B-52s and B-1s in the Middle East have flown only a handful missions against the most common enemies in the region such as the Islamic State. The huge aircraft otherwise sit on call for potential strikes on a nation-state opponent.

In contrast, the Pentagon’s top command in the Pacific must contend with North Korean provocations and Chinese ambitions. In 2016 alone, Pyongyang has tested more than 10 missiles that might be able to carry an atomic bomb.

In July, Beijing sent one of its own H-6K bombers to fly over the disputed Scarborough Shoal in the South China Sea. That month, among a host of other rulings, a U.N. tribunal declared Chinese ships had illegally blocked Philippine fisherman from entering the area.

But sending three different types of heavy bomber to a single base thousands of miles from home is something only the Pentagon can do. Given recent events, it’s unlikely this impressive show of military power was merely a coincidence.

With the help of aerial refueling tankers, long-range bombers have an ability to reach hot spots that shorter-range planes or other weapons simply can’t go … at least at a moment’s notice.

The Air Force also wants to buy expensive new stealth bombers, cruise missiles and other advanced weapons, and to pressure Congress, has been quick to point out its ability to fly long-distance missions from strategic outposts such as — hint hint — Guam.

Earlier in 2016, the flying branch found itself in a major squabble with members of Congress over the total cost of its upcoming and still super-secret B-21 bomber.

“Air Force leaders have claimed that disclosing the total contract award value would make it easier for America’s adversaries to decipher sensitive information about the B-21,” Arizona senator John McCain, an outspoken critic of the contract, wrote in an op-ed for War Is Boring. “Nonsense.”

So, perhaps the Air Force hopes the confluence of bombers in the Pacific might send an equally powerful message to American lawmakers in Washington.

Speaking with Gen. Goldfein on Aug. 10, Secretary James asked legislators to fund the full annual defense budget rather than provide funds through so-called “continuing resolutions” that only set aside money for short periods.

James specifically pointed out how this process could stall development of the B-21. Another short-term resolution “would slow everything down and risk a long-term deterrent capability, which we hope to have in the 2020 decade time-frame.”

If the Air Force can convince Congress, it’s possible that yet another type of American bomber might be showing off in Guam sometime in the next 15 years.

Image: US Department of Defense.