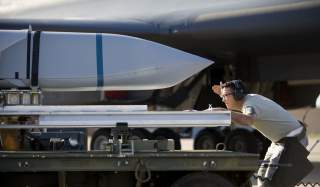 The United States Navy has simultaneously test launched a pair of its new Lockheed Martin AGM-158C Long Range Anti-Ship Missiles (LRASM) from a U.S. Air Force B-1B Lancer supersonic strategic bomber over its Point Mugu Sea Test Range in California. The cruise missiles were tested against “multiple moving maritime targets” for the first time, according to the Navy.

“The completion of this test marks another significant accomplishment for the innovative team of government and industry professionals committed to fielding dominant surface warfare capability on an accelerated timeline,” Capt.Todd Huber, Naval Air Systems Command (NAVAIR) LRASM program manager, said in a statement after the December 8 test.

That means that the Navy is a step closer to fielding the new weapon, which is urgently needed to counter new enemy warships. According to the Navy, once the LRASM becomes operational with the fleet, it will provide a flexible, long-range, advanced, anti-surface capability against high-threat maritime targets.

“It will play a significant role in ensuring military access to operate in open ocean and the littorals due to its enhanced ability to discriminate and conduct tactical engagements from extended ranges,” NAVAIR said in statement.

The LRASM, which is based on the stealthy AGM-158B Joint Air-to-Surface Standoff Missile –Extended Range (JASSM-ER) cruise missile, was initially developed by the Defense Advanced Research Projects Agency for an urgent Navy requirement. As it currently stands, the Navy is planning to buy the LRASM for its Offensive Anti-Surface Warfare Increment 1 requirement to field a new air launched cruise missile.

The Navy will hold a competition for the Offensive Anti-Surface Warfare (OASuW)/Increment 2 anti-ship missile—which will be more comprehensive a follow-on program to the LRASM—that is set to enter service in 2024. The LRASM will be a competitor for that program too and the weapon has already been tested from surface ships and industry officials have said that the AGM-158C can also be launched from submarines.

In the meantime, the Navy is moving quickly to field the LRASM to the fleet as soon as possible. Indeed, the weapon could be operational as early as next year. “Early operational capability for the LRASM is slated for 2018 on the U.S. Air Force B-1 Lancer and 2019 on the U.S. Navy F/A-18E/F Super Hornet,” NAVAIR said in a statement.

For the Navy, given the threats that it currently faces, the entry of the LRASM into service will be welcome news.