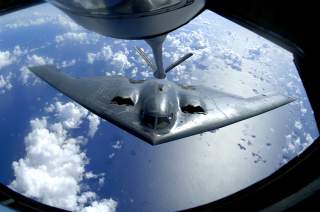 The United States Air Force has moved three of its stealthy Northrop Grumman B-2 Spirit strategic bombers to Guam as tensions continue with North Korea. But while the Pentagon does not deny that the arrival of the stealth bombers on Guam is designed to send a signal to Pyongyang, the message is not aimed solely at North Korea. It is a message aimed at Russia and China, who are also in the region.

“I think, when we move bombers across the globe, we send a signal to everyone,” Joint Staff director Lt. Gen. Kenneth F. McKenzie Jr. told reporters at the Pentagon on Jan. 11.

McKenzie said that the bomber deployment was not in response to any particular crisis, but was pre-planned ahead of time. Moreover, McKenzie suggested that the presence of the nuclear-capable B-2s is not solely related North Korea, but the broader American presence in the Asia-Pacific region. “You would be wrong to view the bomber deployment within the single lens of what it means to the Korean Peninsula,” McKenzie said. “It affects allies across the Pacific.”

There are a number of U.S. allies in the region and the United States regularly deploys bombers to Guam as part of theatre security packages. “The bomber deployment's part of an ongoing planned deployment that affects not only the Korean Peninsula, but also a broader alliance structure in the Pacific,” McKenzie said. “So that's the reason -- the bomber deployment.”

McKenzie could not immediately say how long the bomber deployment would last. However, it should be noted that the B-2 is currently the only nuclear-capable penetrating strategic bomber in the American arsenal.The Boeing B-52 Stratofortress, while nuclear-capable, does not have the ability to penetrate enemy airspace and instead relies on long-range cruise missiles. The Rockwell International B-1B has long since been denuclearized and it also lacks the ability to penetrate into heavily defended airspace. Thus, until the Northrop Grumman B-21 Raider becomes operational in the mid-2020s, America’s fleet of 20 B-2s are its sole long-range penetrating strike aircraft.

If push comes to shove, the Trump Administration would likely choose to rely on the B-2 fleet to conduct a strike on North Korea. Especially in the event that Donald Trump would choose to launch a nuclear strike, the B-2 is the best option because the trajectory of an intercontinental ballistic missile or submarine launched ballistic missile would pass over or very near Russia and China—which could have unintended consequences.