B-52, B-2 and B-21 Bombers Are Getting Nuclear-Tipped Cruise Missiles 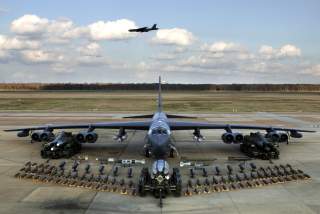 The United States Air Force has awarded Lockheed Martin and Raytheon a pair of contracts worth about $900 million each to develop the stealthy Long Range Standoff (LRSO) nuclear-tipped cruise missile.

Each contact will run for 54-month period of performance during which the two companies will perform technology maturation and risk reduction (TMRR) work on their respective designs. At the end of the 54-month TMRR phase, the Air Force Nuclear Weapons Center will choose a single contractor for the Engineering and Manufacturing Development and Production and Deployment phases of the program in 2022.

“Deterrence works if our adversaries know that we can hold at risk things they value. This weapon will enhance our ability to do so, and we must modernize it cost-effectively.”

The LRSO will start to be fielded in the late-2020s. It will be able to fit on all of the Air Force’s nuclear-capable bombers including the Boeing B-52, Northrop Grumman B-2 and the new B-21 Raider, replacing the antiquated AGM-86B Air Launched Cruise Missile.

Raytheon said that it had nothing to add to the government’s announcement. Lockheed, however, expressed its satisfaction at having been selected for the LRSO program.

"LRSO will provide the next generation strategic deterrent missile for the air-launched portion of the nuclear triad," David Helsel, LRSO program director at Lockheed Martin Missiles and Fire Control, said.

"Lockheed Martin's proven experience in cruise missile and strategic systems technologies will provide the most reliable, capable, sustainable and affordable program in defense of our nation and our allies."

Arms control experts have been questioning why the Air Force needs the LRSO on top of the B-21 Raider. But the answer is rather simple, over the long-term, the Air Force is not convinced that even the stealthiest of aircraft will be able to penetrate into heavily defended airspace as Russian and Chinese air defenses become ever more capable.

“DoD [Department of Defense] should no longer assume that its strike aircraft will always be able to use short-range, direct attack ‘gravity’ weapons against targets that are covered by advanced point defense systems,” Mark Gunzinger, a former B-52 pilot and current analyst at the Center for Strategic and Budgetary Assessments, said.

“This applies across the spectrum of conflict, not just conventional warfare.”

Gunzinger notes that even for a stealth bomber, a standoff weapon will likely be a necessity.

“We suggest ‘medium range standoff’ might be about 100 nm or more. Non-penetrating aircraft would need to use longer-range standoff weapons, of course.”

Indeed, the Pentagon seems to share that opinion, top defense official said that they could not necessarily count on the B-21 to survive against the most capable future air defenses. “We can’t expect that always we’ll be able to circumvent any advanced air defense systems from any adversary,” Robert Scher, assistant secretary of defense for strategy, plans and capabilities told the Congress last year.

“So having the ability to launch from stand-off ranges will be important.”

"The B-21 and LRSO are not redundant—they are synergistic,” Deptula told The National Interest.

“The LRSO when carried by B-21s will enable simultaneous target attacks against several targets from one aircraft with multiple cruise missiles making defense against this combination highly problematical. This combination strengthens deterrence by presenting an adversary an intractable challenge.”