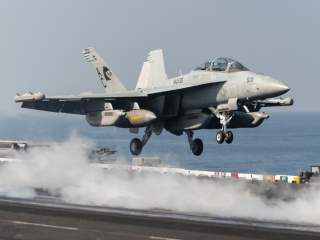 The Battle of the Beams was a period during World War II concerning German attempts to harness radio navigation for night bombing in the UK and the resulting British countermeasures. The British eventually managed to jam or distort all three iterations of German radio signals, making it more difficult for the bombers to hit their targets. That episode dramatically illustrates the ephemeral nature of advantages in electronic warfare, especially when operating against an agile and sophisticated foe.

Since the end of the Cold War and the onset of the War on Terror, the principal targets of Western military power have been relatively low-tech groups in the Middle East. Electronic warfare platforms like the U.S. Navy’s EA-6B Prowler were used to jam enemy communications during operations, and the relatively low tech of the enemy limited their ability to counter. But the constant threat to ground troops from improvised explosive devices (IEDs) led to the development of counter-IED jamming systems, and a new “invisible war” emerged. As quickly as vehicle-mounted jammers could be reprogrammed, insurgents made use of a variety of commercial technologies—cell-phones, key-fobs, door remotes—to adapt.

The focus of electronic warfare understandably changed to deal with the threat of the day, but a focus on counter-IED systems has had consequences for wider development. For example, the ALQ-99 jamming pod used on the Prowler, and on the new EA-18G Growler, was first used as far back as the Vietnam War and its successor is still years away.

A lack of new developments in electronic warfare since the end of the Cold War has led to a closing of the technological gap between the United States (and allies such as Australia), and potential adversaries such as Russia or China. This trend has been especially clear since Russian EW capabilities were used in Eastern Ukraine. The Russian land-based Krasukha-4 jamming system proved too much for the Ukrainians to handle, and was described by Lieutenant General Ben Hodges, commander of U.S. Army units in Europe, as “eye-watering” in sophistication.

Last year, Russia deployed the Krasukha-4 to Syria in support of its operations there, along with its S-400 radar-guided missile system. The S-400 uses AESA (active electronically scanned array) radar to track multiple aerial targets out to 600km, and can fire supersonic missiles up to 400km. Russia is exporting the S-400 to China and India, and its predecessor platform, the S-300, is operated by several countries including China and Iran. Because of this proliferation, any conflict with Russia, China or even Iran is likely to involve a substantial electronic warfare component.

The Australian Defence Force will need new and advanced tactical EW capabilities to contribute in the event of conflict with an adversary that’s technologically capable. There are systems “on the way,” but there are a few things that strategists and observers should be aware of when considering the future of Australia’s EW capability.

First, the Australian government announced in 2013 that it would purchase twelve new-build Growler aircraft from the United States to complement the twenty-four F/A-18F Super Hornets already in service. Former RAAF Air Marshal Geoff Brown said that the Growler “will have the biggest strategic effect on the ADF since the F-111 in the 1970s.” They’ll still operate the obsolescent ALQ-99 jammer pods, but the ADF will likely seek to acquire the U.S. Navy’s Next-Gen Jammer (NGJ) when it arrives sometime after 2021. Essentially, the new jammer is “a move from dumb jamming to smart jamming,” and it’s being designed with Growler compatibility as a priority. The RAAF Growler will also field the ALQ-218 electronic intelligence (ELINT) system, used to detect and analyse signals in the operating environment.

Second, the F-35 Lightning-II will have an exceptional AESA digital radar system that will also be a capable electronic warfare system. It will be able to function as a jammer and generate false targets. It’s not clear if the F-35’s EW capability will be as substantial as the NGJ’s, since the F-35 radar is “optimized to be a targeting radar,” and is limited to X-band frequencies. However, the F-35 development program will continue to evolve a “cognitive EW” capability, which will allow the F-35 to adapt its electronic detection and emissions with increasing agility.

Third, electronic warfare needn’t be restricted to electronic attack or ELINT capabilities. In fact, maintaining a technological edge in those capabilities is the bare minimum that the U.S. Armed Forces and the ADF should be doing. The outcomes of conflicts of the future are being determined in the research labs of today. Electromagnetic spectrum capabilities include a growing role for microwave technology, such as high-power microwave weapons that can disrupt or even destroy the electronics of enemy vehicles and drones. Also of note are developments in non-nuclear electromagnetic pulse weapons and offensive lasers.

Australia is well positioned to reap the capability benefits of U.S. electronic warfare development, which has the added benefit of improving interoperability, but the ADF should investigate opportunities to contribute to future research in the field. The Defence Science and Technology Group already employs a team of world-class radar specialists to work on the Jindalee Operational Radar Network.

Finally, the U.S. Navy will continue to bear the brunt of testing Australian platforms’ networking capabilities, as they are the primary operators of the Super Hornet and Growler, as well as the P-8 Poseidon and MQ-4C Triton platforms which Australia is planning to acquire. The ADF should also seek to confirm the F-35 and NGJ’s networking compatibility with the RAAF’s E-7A Wedgetail and Gulfstream 550, and the RAN’s Air Warfare Destroyer and future frigates and submarines. The ADF will need to align its structure and EW doctrine to capitalize on the capability provided by networked EW and signals intelligence collection systems.

In the event of conflict, Australia should be able to employ modern electronic warfare platforms, either independently or in concert with allies. Otherwise we could end up on the wrong side of the next Battle of the Beams.

James Mugg is a researcher at ASPI. This article first appeared in the Strategist.