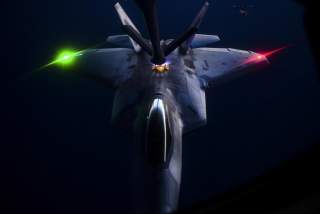 It has become absolutely clear to any reasonable observer that it is not possible either to give Russian President Vladimir Putin what he wants nor to simply ignore his threats and wait him out. Like a shark, he must continually move and feed. Success only breeds the need for a greater aggression under the umbrella of self-perception of invincibility. Ironically, passivity or accommodation in the face of Russian aggression will only produce more of it. Resistance to Russian subversion and aggression is, in the new Putinist dialectic, evidence of aggressive intent. Either way, the West is faced with a continually aggressive adversary probing for weakness. In this way, the current situation does resemble the late 1930s.

For the first time in more than a generation, NATO must confront the very real possibility of major conventional conflict with Russia. This has completely overturned NATO’s defense strategy as well as the budget and force structure plans of virtually all member countries. The Alliance’s Supreme Commander, General Breedlove, described NATO’s new strategic challenge very clearly. “For the last 12 to 14 years, we’ve been looking at Russia as a partner. . . . We’ve been making decisions about force structure, basing investments, et cetera, et cetera, looking to Russia as a partner. Now what we see is a very different situation.”

Russia is playing a very weak hand. There is no way that Moscow can win a protracted Cold War or even a conventional confrontation with an Alliance that has 20 times Russia’s gross domestic product and four times its conventional military power. This is a major reason that it places such heavy reliance on its nuclear forces for deterrence and on threats to use nuclear weapons to dominate a local crisis. The Kremlin hopes that should such a crisis occur, NATO will accept a small defeat rather than risk a big war. It is primarily with the goal of intimidation in mind that Russia has devoted so many scarce resources to developing advanced ballistic and cruise missile capabilities. This is also why it has gone to great effort and expense to launch cruise missiles against Islamic State of Iraq and Syria (ISIS) targets from both the Caspian and Eastern Mediterranean Seas. The real target of these attacks is the will of NATO’s leadership.

It is important to recognize that the challenge facing NATO and the United States is not from any particular element of Russian power, asymmetric, hybrid, conventional or nuclear. Nor is it the Russian nation or its leadership. Rather, it is to defeat Putin’s strategy for what Stephen Covington, international affairs advisor to NATO’s Supreme Allied Commander Europe, calls breakout, thereby denying Moscow the ability to disrupt the existing international order at minimum risk and an acceptable price.

Post-Soviet Russia is no longer a status quo power centered on preserving Russia’s place in the security order through static, no change policies and the static presence of forces in frozen con­flicts. Russia today is a system change power. Putin’s breakout strategy is designed to destabilize, and the approach seeks to unfreeze frozen conflicts, break rules, and foster tensions where useful to accelerate the melting away of Europe’s proven secu­rity principles and rules. Putin gains little for Russia’s security today from these actions. It is a carefully developed policy and strategy. It is not a carefully balanced strategy. It shows scant regard for the instability created by this policy – that is the intent of the policy. It is a strategy designed to test wills and determine who will tire first and compromise on the principles of security. These actions set Russia, and consequently Europe with it, on a course to compete over Europe’s future security arrangements.

The challenge is both political and military and responses need to be in both spheres. The political challenge is perhaps the more difficult because it requires that the West accept the reality that Putin views it as an existential threat to his regime and his country. It also means that the West must respond to the Kremlin’s efforts to use non-traditional/military means to destabilize NATO and the European Union (EU) with similar measures against Russia and its allies.

The political portion of a new NATO/U.S. playbook for dealing with Putin is itself, like Gaul, divided into three parts. First, additional steps must be taken to reverse perceptions of a lack of commitment on the part of NATO to the defense of its members and specifically to treating so called gray zone attacks as subject to an Alliance response. Second, much more needs to be done to shore up nations in NATO/EU that were and remain themselves politically and organizationally fragile. The Ukraine is an example of how bad it can get. Third, there must be an intensified effort to apply the same tactics and concepts central to the new Russian strategy against Moscow.

NATO also should act to demonstrate its resolve to ensure not merely the physical security but the independence and full sovereignty of all its members in the face of the threat of political subversion. First, NATO needs to clearly and formally reject the Russian assertion of special rights and responsibilities for the well-being of the so-called near-abroad. Actions taken by Russia in the name of assisting ethnic Russians outside that nation’s borders should be treated as a violation of Article IV. Second, if NATO lowers the bar with respect to its commitment to employ Alliance assets in its defense against threats, then it must also possess the capabilities to affect the necessary response.

Over the past decade or more, the United States and several of its key allies have developed unparalleled capabilities to counter the threat posed by unconventional forces operating in the midst of civilian populations while receiving significant external support. The experience of U.S. and Coalition Special Operations Forces to target terrorists, insurgents and agitators has been well demonstrated. What is not as well recognized is the experience gained in creating and operating all-source intelligence collection cells using state-of the-art tools to attack the network. The U.S. Joint Improvised Threat Defeat Organization has a remarkable set of capabilities and skilled practitioners who have honed their skills in the effort to attack the networks that provide financing, materials, operatives and propaganda in support of terrorist organizations such as ISIS and Al Qaeda. These same capabilities could be brought to bear on the problem of detecting, tracking and characterizing Russian intelligence and operations networks.

NATO and the EU need to invest in an array of public information assets for the purpose of countering Russian disinformation warfare and deception operations targeted at the nations of Europe. There have been some efforts in this regard with respect to cyber threats. NATO and the EU need to set up information cells to track Russian disinformation campaigns. These cells should also possess a quick reaction capability to rapidly counter Russian disinformation and propaganda. A number of European nations have national legislation or regulations designed to ensure that information carried in the media is reliable and objective. The penalties for knowingly providing false or misleading information should be made tougher and include not only fines but suspension of licenses to operate. Beyond these things, efforts to combat corruption, improve effective and honest governance, build credible partnership capacity and integrate minorities need to be significantly increased.

A Western version of WikiLeaks directed at exposing corruption and the criminal behavior of the Russian elite could have a devastating impact on the Kremlin’s domestic credibility. Russia is expected to continue to refine and improve its techniques for information operations, including expanded use of social media. It would make tremendous sense for the West to exercise its enormous capabilities to do the same to Russia.

It is also important to consider additional economic measures that can be used either to deter Russian activities or as a way of diminishing the capability of Moscow to pursue its objectives. Further restrictions on Russia’s access to capital markets, limits on the ability of oil and gas companies to import equipment and parts and expanded efforts to track and even limit outflows of capital from Russia could have a very significant impact on the interests of the kleptocracy and the operation of the overall economy. In addition, Russia today is highly dependent on foreign sources of advanced technology for its defense industry. The creation of a new version of the Coordinating Committee for Multilateral Export Controls, the Cold War organization focused on restricting exports of sensitive technologies to the Soviet Union, should be explored with the idea of restricting access not only to dual use and military goods but those that would go to private companies controlled by the Kremlin mafia.