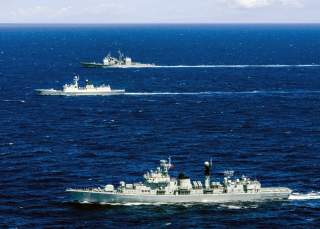 In November 2012, then president Hu Jintao’s work report to the Chinese Communist Party’s 18th Party Congress was a defining moment in China’s maritime history. Hu declared that China’s objective is to be a haiyang qiangguo—that is, a strong or great maritime power. China “should enhance our capacity for exploiting marine resources, develop the marine economy, protect the marine ecological environment, resolutely safeguard China’s maritime rights and interests, and build China into a strong maritime power” (emphasis added).

Hu’s report also called for building a military (the PLA) that would be “commensurate with China’s international standing.” These two objectives were repeated in the 2012 PRC defense white paper, which was not released until April 2013, after Xi Jinping had assumed Party and national leadership.

According to the white paper:

China is a major maritime as well as land country. The seas and oceans provide immense space and abundant resources for China’s sustainable development, and thus are of vital importance to the people’s wellbeing and China's future. It is an essential national development strategy to exploit, utilize and protect the seas and oceans, and build China into a maritime power.

The study upon which this paper is based addressed a number of questions related to what China’s aspirational goal actually means. These are summarized below:

How does China understand the idea of maritime power?

In the Chinese context, maritime power encompasses more than naval power but appreciates the importance of having a world-class navy. The maritime power equation includes a large and effective coast guard; a world-class merchant marine and fishing fleet; a globally recognized shipbuilding capacity; and an ability to harvest or extract economically important maritime resources, especially fish.

In exploring how Chinese commentators think about maritime power, it was instructive to note how many Chinese conceptualizations included notions of power and control. For example, an article in Qiushi, the Chinese Communist Party’s theoretical journal, stated that a maritime power is a country that could “exert its great comprehensive power to develop, utilize, protect, manage, and control oceans.” It proceeded to opine that China would not become a maritime power until it could deal with the challenges it faces in defense of its maritime sovereignty, rights, and interests, and could deal with the threat of containment from the sea.

Why does China want to become a maritime power?

China’s strategic circumstances have changed dramatically over the past 20 years. The growth in China’s economic and security interests abroad along with longstanding unresolved sovereignty issues such as unification with Taiwan and gaining complete control of land features in the East and South China Seas. Of perhaps equal importance, Xi Jinping has embraced maritime power as an essential element of his “China Dream,” leading to a Weltanschauung within the Party and PLA that becoming a “maritime power” is a necessity for China.

Finally it wants to be a maritime power because it deserves to be; China’s reading of history concludes that maritime power is a phenomenon associated with most of the world’s historically dominant powers.

Anxiety regarding the security of China’s sea lanes

China’s leaders worry about the security of its seaborne trade. The prominence given to sea lane protection and the protection of overseas interests and Chinese citizens in both the 2015 defense white paper and The Science of Military Strategy makes clear that sea lane (SLOC) security is a major preoccupation for the PLA. Chinese security officials can read a map, they appreciate the vulnerability of China’s SLOCs; a concern reinforced by U.S. and western security analysts who write frequently about interrupting China’s sea-lanes in times of conflict.

When will China become a maritime power?

Remarks made by senior leaders since 2012 make it clear that the long-term goal is for China to be a leader across all aspects of maritime power; having some of these capabilities means that China has some maritime power but that it is “incomplete.” The research for this paper strongly suggests that China will achieve the goal of being the leading maritime power in all areas except its navy, by 2030.

Is becoming a “maritime power” a credible national objective?

China is not embarking on a maritime power quest with the equivalent of a blank sheet of paper. In a few years it will have the world’s second most capable navy. China is already a world leader in shipbuilding, and it has the world’s largest fishing industry. Its merchant marine ranks either first or second in terms of total number of ships owned by citizens. It already has the world’s largest number of coast guard vessels.

A significant finding is that from a Chinese perspective U.S. military presence in the Western Pacific impedes Chinese maritime power ambitions. To Beijing, the U.S. rebalance strategy exacerbates this problem. For China to satisfy the maritime power objective, it must be able to defend all of China’s maritime rights and interests in its near seas in spite of U.S. military presence and alliance commitments. In short, it must be able to successfully execute what the latest defense white paper terms “offshore waters defense” for China to be considered a maritime power.

The maritime power vision is global

A wide variety of authoritative sources indicate that maritime power will also have an important global component. The latest Chinese defense white paper indicates that PLA Navy strategy is transitioning from a single-minded focus on “offshore waters defense,” to broader global strategic missions that place significant importance on “distant-water defense.”

When one counts the number and variety of warships that the PLAN is likely to have in commission by around 2020, China will have both the largest navy in the world (by combatant, underway replenishment, and submarine ship count) and the second most capable “far seas” navy in the world. The total “far seas” capable warships/Underway replenishment/submarines forecast to be in PLAN’s inventory around 2020 total between 95 and 104 major warships. If one adds this number to the 175-odd warships/submarines the PLAN has commissioned since 2000 that are largely limited to near seas operations and likely will still be in active service through 2020, the total PLAN warship/replenishment/submarine strength circa 2020 is in the range of 265-273, all of which are homeported in China.

How large will the PLAN become?

We don’t know how large the PLAN will become. This is the biggest uncertainty when considering China’s maritime power goal, because China has not revealed that number.

The China Coast Guard already has the world’s largest maritime law enforcement fleet. As of this writing, the Office of Naval Intelligence counts 95 large (out of a total 205) hulls in China’s coast guard. Chinese commentators believe that China cannot be considered a maritime power until it operates a “truly advanced” maritime law enforcement force. The key will be the successful integration of the discrete bureaucratic entities that have been combined to form the coast guard, and much work remains to be done on this score.

One of the most important findings of this project is the heretofore underappreciated role that China’s maritime militia plays, especially in the South China Sea. Often, it is China’s first line of defense in the maritime arena. It has allowed China to harass foreign fishermen and defy other coast guards without obviously implicating the Chinese state.

Shipbuilding and China as a maritime power

China became the world leader in merchant shipbuilding in 2010. For the last several years, global demand has shrunk significantly, and China, along with other builders around the world, now faces the reality that it must shed builders and exploit economies of scale by consolidating and creating mega-yards. In short, for China “… to move from a shipbuilding country to shipbuilding power,” it has to focus on quality above quantity.

China’s current merchant fleet is already world class. Beijing’s goal is to be self-sufficient in sea trade. During the past 10 years, the China-owned merchant fleet has more than tripled in size. In response to the Party’s decision for China to become a maritime power, the Ministry of Transport published plans for an even more competitive, efficient, safe, and environmentally friendly Chinese shipping system by 2020.

Fishing is an element of China’s maritime power

China is by far the world’s biggest producer of fishery products (live fishing and aquaculture). It has the largest fishing fleet in the world, with close to 700,000 motorized fishing vessels, some 200,000 of which are marine (sea-going) with another 2,460 classified as distant-water (i.e., global, well beyond China’s seas) in 2014. The fishing industry is now viewed in strategic terms; it has a major role in safeguarding national food security and expanding China’s marine economy.

Beijing’s views on its maritime power: What are the shortfalls?