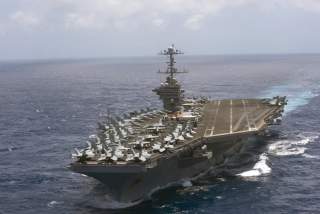 China is preparing for its go or go home moment in the South China Sea and it appears they have chosen the right time to make a play for regional and, ultimately, global dominance. The announcement that China has installed reinforced hangars to protect tactical aircraft from outside attacks as well as the appearance of other “unknown structures” which are easily recognizable as missile revetments to any trained observer, demonstrates that China’s proclamation of a military and economic exclusion zone over the South China sea is imminent. The timing of the announcement will not be random, and U.S. strategists must prepare to defend the global international system that was established 70 years ago, or accept inevitable decline.

The fighter jet hangars at Fiery Cross and Subi reefs appear to be nearly completed while those at Mischief reef are in early stages of construction.  Each of these hangars will have the capability of housing up to 24 fighter jets, combining to place a force of 72 frontline fighters, nearly twice the tactical fighter load out of a Nimitz class supercarrier, in the air over the South China Sea at any moment.  Such a compliment of aircraft could easily establish air superiority for a prolonged period of time.  The reinforced nature of the hangar’s design can protect them from attack from all but the largest weapons.

The “unknown structures” noted in overhead photographs resemble missile revetments seen elsewhere in China.  The artificial features are also sporting towers built in sets of three on each artificial feature. Combined and considered as a group across all three features, they appear to be an interlocking sensor network capable of covering several bands of the radar spectrum. Should China decide to tie its investments on these three features together through the installation of new state of the art weapons, it would tip the balance of power in the region.

Installation of a combination of the YJ-62 surface to surface missile would effectively secure the southern approach to the South China Sea to military and commercial shipping.  Adding the HQ-9A, a Chinese surface to air missile comparable to the Russian S-300 would limit tactical aircraft in the region to fifth generation aircraft such as the F-22 and F-35 only.  American planners would not be confident of the survivability of fourth generation aircraft such as the F-16 and carrier based FA-18 Hornet should tensions with China rise.  If China went so far as to install their DF-21D carrier killing anti-ship ballistic missile onto one or more of these bases, the United States Navy would lose access to its base in Singapore and be forced back to Australia, Pearl Harbor and Japan.

Once the reinforced hangars and revetments are completed, the aircraft and missiles could be flown in and installed in the middle of the night, providing the American president with a proverbial 3-AM phone call.  We can surmise when such an event would occur.  China would not be so foolish as to pull the trigger prior to the American presidential election, placing themselves on the front page during an election that has already become too strange to generate a predictable outcome, but they also would not wait until the next president is sworn in next January.  Barack Obama’s passive “lead-from-behind” foreign policy of erased redlines has made him an able partner in China’s global expansion.  China will make its move during the interregnum between the election and the installation in a new president with a high level of confidence that the current occupant of the White House will accept the new fait accompli without complaint.

There is another option, however.  China’s strategy of expansion has worked best when their activities are ignored the most. Increased international conversations regarding the military buildup on artificial features in the South China Sea already declared illegitimate by the International Tribunal at the Hague will place China increasingly in the corner.  This containment can be strengthened through the exploration of a array of economic and technological sanctions against China similar to those imposed upon China’s authoritarian ally in Russia following its acts of aggression in the Crimea and Ukraine. Lastly, the US military, in conjunction with partners should undertake a series of continuous military exercises in international waters but within 12 nautical miles of the artificial features to include a landing by a multinational element to make clear to China that they are the aggressor in the region.

A failure to take these steps will greenlight China’s declaration of an Air Defense Identification Zone as well as a military exclusion zone over the South China Sea. At that point the choice will become binary; war or an ignoble peace characterized by a managed decline within an increasingly authoritarian international system and rising mercantilist economic order. Its time we realize that its go or go home time for both sides of the competition.