Is China’s Militarization of the South China Sea Really 'Defensive'? 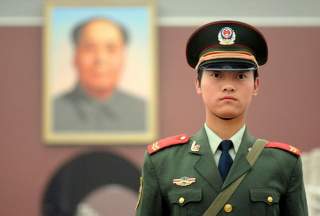 The latest buzzword of the South China Sea 'war of words', as observed in media reports, academic opinion and official press remarks is none other than 'militarization'. But what does 'militarization' mean?

The Merriam-Webster and Oxford dictionaries commonly define 'militarization' as "to give a military character or quality to something." Alternative definitions include "an act of making something operate in a manner similar to armed forces"; "to equip or supply a place with military forces"; "to adapt for military use"; and "an act of deploying armed forces to an area."

But such conceptual definitions aside, what matters ultimately is how each concerned party interprets militarization: what it means, and what activities it encompasses. Suffice to say, virtually every nation-state engages in peacetime military buildup. 'Militarization' becomes a policy-relevant concept in the context of geopolitical contestation, in this case, maritime territorial and jurisdictional disputes in the South China Sea. Naturally both claimants and non-claimants are concerned about activities taking place in the region.

However, there is no common agreement over what 'militarization' means. The focus of attention has been on China whose activities in the disputed waters, for example the building of artificial islands and facilities, have been widely described as militarization. Beijing has parried such accusations, calling its buildup 'defensive' and instead describes Washington's activities, such as freedom of navigation operations and the recent Philippine-US bases agreement, as its own form of militarization. Again, this is where one sinks into the quagmire reminiscent of the disagreements during Cold War-era arms control negotiations over what constituted 'legitimate' or 'defensive' military preparations.

At the most basic, claimants have already stationed military troops to garrison features they occupy. Vietnam for example has deployed marines, equipped with not just small arms but heavier weaponry such as anti-armor recoilless rifles and shoulder-launched surface-to-air missiles. Taiwan withdrew marines from Itu Aba Island in the late 1990s, replacing them with coast guard personnel equipped with, notably, 81mm and 120mm mortars that give them more than a law enforcement role. For the longest time, various claimants such as the Philippines and Taiwan have flown military airlifters to those outposts.

Therefore, determining what counts as 'militarization' amounts to a meaningless exercise using broad conceptual definitions. In fact, both claimant and non-claimants have already militarized the South China Sea. But the degree and extent of such activities, and the strategic and operational consequences they entail, are what matter most. Using this understanding, China's activities stand out. How 'defensive' are they? Beijing has upped the ante over the present scope of militarization by deploying certain weapons systems that can potentially give it an edge over its South China Sea rivals.

In February this year, two batteries of HQ-9 surface-to-air missiles (SAM) were deployed to Woody Island, part of the Chinese-occupied Paracel Islands also claimed by Vietnam. What is so interesting about this system is its ability to engage targets at a 200 km slant range – which practically out-distances short-range missiles arming, say, Vietnam's garrisons. This mobile, quick-reaction SAM, which is said to be a reverse-engineered version of Russia's S-300, is capable of extending China's air defense coverage in the South China Sea. If deployed to Woody Island, the missile is able to provide effective air defense cover for the entire Paracels.

Given its mobility, the HQ-9 can also be readily deployed to the Spratlys, especially by airlift. The missile's presence on Woody Island reflects concerns about the protection of high-value military installations, such as airstrips. Therefore, if the HQ-9 is dispatched to the artificial islands where airstrips are built, it becomes possible to provide air defense coverage over most parts of the Spratlys. Nonetheless, aware of the HQ-9's limitations, Beijing has acquired the superior Russian-designed S-400 which possesses similar mobility, but touts a 400 km engagement range and enhanced ability to operate in marine environments.

In late March, imagery posted on China's Weibo blog suggests the deployment of YJ-62 anti-ship cruise missiles to Woody Island at around the same time as the HQ-9. This 300 km ranged, sea-skimming missile shares the self-contained, mobile, quick-reaction, better electronic counter-countermeasures (or anti-jamming) characteristics as the HQ-9. Its introduction to the South China Sea will trump those deployed by any other claimant. With its 300 kg warhead, one YJ-62 can inflict severe damages upon a warship displacing 7000 tons. Except for the US and Japan, Beijing's South China Sea rivals do not tout surface warships displacing above 5000 tons, plus many lack effective anti-missile self-defenses, much less the means to destroy these coastal launchers once they enter the missiles' engagement envelope. While China will not be foolhardy to use these missiles to threaten vital sea lines of communications used by civilian shipping, it will certainly be keen to use the YJ-62 to impose a military shipping exclusion zone, plausibly covering both the Paracels and Spratlys.

Those two different missile systems will complement each other and work in tandem with other Chinese military and coast guard assets operating in the South China Sea. Debating about 'permanent deployment' is moot because these mobile systems can be rapidly dispatched to the area at the onset of rising tensions in preparation for conflict, thereby increasing Beijing's ability to deter, defend and support offensive operations against its rivals.

With these systems, China enhances its ability to assert military control through denying access in and over the South China Sea. More importantly, given the threat these missiles pose to foreign aerial and naval assets, their deployment may prompt regional rivals to acquire both defensive and offensive countermeasures such as better electronic warfare systems, long-range air- and sea-launched standoff weapons, and specialist armaments for suppression of enemy air defenses – thereby fueling further militarization of the South China Sea.

Given the differing national interpretations (and implementation) of 'militarization', Beijing looks set to pursue its own brand of militarization at its own comfortable pace and to the extent, calling such moves 'defensive' measures in any manner befitting its South China Sea interests.