Belgium: The Next Missile Defense Superpower? 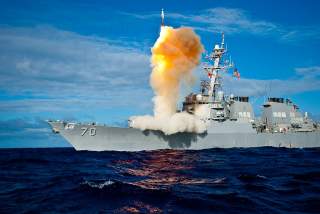 Little Belgium is known for producing excellent chocolates and machine guns, not rockets that shoot down ICBMs.

Yet Belgium has quietly made the decision to build frigates equipped with exoatmospheric interceptors that sound a lot like the U.S. Navy’s Aegis system. This would make Belgium—a country the size of Maryland—the first European nation to have the capability to destroy ballistic missiles in space.

“Our frigates will, if desired, be deployable in a ballistic missile defense system, as they will be able to launch missiles capable of engaging ballistic missiles outside the atmosphere,” said Belgian government spokeswoman Laurence Mortier in an e-mail to the National Interest.

The new frigates are being jointly developed by Belgium and the Netherlands, according to Dutch maritime site Marineschepen.nl. At this point, only Belgium intends to install interceptors on its ships, which would replace Belgium’s existing M-class frigates, according to the website.

What Belgium is proposing sounds very much like America’s exoatmospheric defense network: the Ground-based Midcourse Defense (GMD) system of forty-four land-based rockets emplaced in silos in Alaska and California, and most especially the U.S. Navy’s thirty-three Aegis cruisers and destroyers equipped with missile detection radars and SM-3 interceptors. These weapons are designed to smash warheads by essentially slamming them with big rocket-propelled darts. Interception occurs during midcourse, the middle phase of a ballistic missile’s journey when it cruises through space for perhaps twenty minutes before the warhead plunges into the atmosphere.

Several European states already have a ballistic missile defense (BMD) capability through NATO’s BMD program. For example, Turkey hosts a missile-warning radar, Britain is designing its own, Spain hosts U.S. Aegis ships at its Rota base and Poland will base U.S. SM-3 interceptors. The Netherlands and Denmark also plan to install BMD radar on some of their warships.

Yet these European capabilities solely comprise radar to detect missiles, or bases for U.S. interceptors. It is only the United States that provides the muscle for exoatmospheric intercept through its SM-3 rockets—unless Belgium joins the club.

However, it is scarcely conceivable that Belgium could afford to design and build a complete exoatmospheric missile system. The Belgian government has announced that it would like to increase defense spending to €9 billion (almost $10 billion) per year by 2030. Yet America has already spent $40 billion on its GMD program alone, and there are still grave concerns about whether it does or ever will work. So it seems likely that Belgium would buy its interceptor from the United States, which would probably be the SM-3.

Let’s hope that Belgium knows what it’s getting into. Exoatmospheric intercept is extremely tricky. It means dealing with the formidable challenge of distinguishing a nuclear warhead from the balloons and other decoys that a ballistic missile will deploy to spoof the defenders. The U.S. BMD program is designed to stop a handful of missiles from Iran or North Korea, because current technology simply cannot reliably stop a massive Russian ICBM strike. Nonetheless, Europe with its own BMD capability would likely make Moscow nervous that this could be a prelude to a full-scale defense system aimed at blocking Russia’s ICBMs. Which in turn could spur Russia to deploy met more missiles aimed at Europe.