Below Glideslope: The MQ-25 Stingray Appears to be Heading for a Ramp Strike 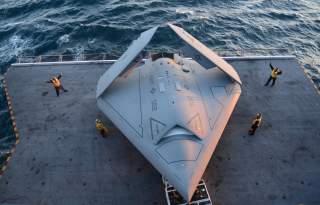 Even as reports surface of American supercarriers and their embarked air-wings hurriedly steaming towards the Korean peninsula, the saga of the Navy’s carrier based unmanned aircraft program seems to have taken yet another turn for the worse.  Instead of adhering to direction by both the Chief of Naval Operations (CNO) and the Deputy Secretary of Defense to maximize the strike range of the carrier air wing it appears that naval aviation leadership is placing its finger on the MQ-25 design scale and prioritizing unrefueled endurance for the intelligence/surveillance/reconnaissance (ISR) mission at the expense of great fuel offload for long-range mission tanking.

During recent discussions naval aviation leaders stated that the threshold requirements for the as yet un-designed MQ-25 would include the ability to remain airborne for 12 hours in order to perform overnight ISR missions while the carrier deck is shut down.  This requirement for MQ-25 to “bridge the night” is a “cut and paste” from the Unmanned Carrier Launched Surveillance and Strike (UCLASS) program requirement, which was canceled after a review of Joint ISR capabilities concluded that a carrier-based ISR aircraft wasn’t necessary.  The problem for MQ-25?  Designing an aircraft to fly 12 hours unrefueled negatively impacts its ability to carry large fuel (or other) payloads over long distances.  During UCLASS, the ISR endurance requirement came at the expense of internal weapons payload.  On MQ-25, the 12-hour requirement applies a “tax” on the aircraft’s long-range refueling capacity.

Conversations with industry experts regarding the MQ-25 suggests that an aircraft small enough to meet the additional requirement of fitting five within the air wing should be capable of offloading up to 17,000 pounds of fuel during a refueling maneuver conducted in a “sweet-spot” 500 and 590 nautical miles from the carrier (the distance of the F-35C’s unrefueled combat radius).  However, in an apparent effort to preserve a previously rejected 12-hour ISR endurance requirement, naval aviation officials set the MQ-25 fuel offload requirement at only 14,000 pounds at 500 nautical miles from the carrier.  Not only is this 20-25% less than what is achievable, it would result in two fewer F-35Cs being refueled at their maximum radius – a 20% reduction in F-35C striking power.

Perhaps most significantly, naval aviation’s retention of the 12-hour ISR endurance requirement – at the expense of mission tanking – defies clear direction by senior Navy leadership.  In August of 2016, sensing naval aviation’s desire to simply resume UCLASS by another name after its cancellation, the CNO and Assistant Secretary of the Navy for Research, Development and Acquisition issued a joint program decision memorandum that explicitly stated that “the primary mission for the MQ-25 will be a range-extension aerial refueling platform (tanker) with some secondary ISR capability” and that “the tanking mission will govern the aircraft configuration, and any design trades will prioritize better tanking.” Rather than follow this rather unambiguous order, naval aviation seems intent to once again attempt to develop a long-endurance ISR aircraft with secondary tanking capability, with the ISR mission governing the aircraft configuration and the design trades that prioritizes longer ISR endurance.

To add icing to this badly baked cake, naval aviation has also chosen a highly suspect acquisition strategy.  Defense Department acquisition policies (and most congressional oversight committees) generally require a multicontractor, government-funded 18-24 month preliminary design phase – culminating in a preliminary design review certified by the Under Secretary of Defense for Acquisition – prior to final source selection for the engineering and manufacturing development (EMD) contract.   Yet, despite MQ-25 ostensibly being a new aircraft for a new mission (long-range tanking), with the requirements only now being communicated to industry, the Navy plans to move straight to final source selection and release a solicitation for the EMD contract in September of this year.  Moreover, they have no plans to issue contracts for preliminary design work.  To put this into perspective, this means the Navy intends to choose a prime contractor for the first-ever operational carrier-based unmanned aircraft – one intended to provide a critical mission capability for decades – based on a mere four months of industry-funded conceptual design work.  Not only would this be massively high risk, it would also delay by more than a year the start of Navy-funded development as the source selection process moves from RFP release to a months-long Navy evaluation and a similarly protracted protest resolution phase.

So to sum up, naval aviation has chosen to ignore both CNO direction on mission capability requirements and long-standing acquisition policy in an attempt to get the carrier-based ISR aircraft that a Deputy Defense Secretary-led review concluded they didn’t need.  By definition this program is below glideslope and heading for a ramp strike if someone doesn’t wave off the current approach.

The basic strategic requirement remains shockingly clear. Carrier aviation’s average strike range has been nearly cut in half since the end of the Cold War from 900 to 495 nautical miles. It was provided with a solution by Secretary of Defense Robert Gates in 2006 when he transferred the Joint Unmanned Combat Aerial Vehicle to the sea service.  This design, which served as the basis for the very successful X-47 test program, was based upon a stealthy configuration reminiscent of the naval aviation’s A-12 attack aircraft.  This program produced two prototype aircraft that conducted unmanned carrier landings and mid-air refueling tests in 2014 and 2015 before being abruptly and surprisingly shelved to make way for the previously mentioned UCLASS program.  UCLASS represented a shift away from a design capable of evolving into a strike aircraft towards an ISR platform despite the fact that, according to requirements document, the Navy had already purchased enough unmanned MQ-4C Triton Broad Area Maritime Surveillance aircraft and manned P-8 Neptune Maritime Patrol aircraft to provide surveillance for the carriers. Yet naval aviation persists in its attempt to hobble the MQ-25 Stingray by compromising its basic design to perform a 12-hour-fly-through-the-night ISR mission.  This decision is unacceptable and represents a direct challenge to leadership.

The Chief of Naval Operations and Acting Secretary of the Navy Stackley need to step back in and take control of the MQ-25 program before it crashes. The carrier air wing must be supplied with a mission tanker in order to regain its historic capacity to conduct long range attack profiles. They should insist that the carrier aviation community adhere to the intent of the August 2016 PDM and deliver the capacity to refuel a squadron of F-35s at or near their maximum range.  To do so they should follow the appropriate process and initiate a transparent and multi-contractor, competitive, technology maturation and risk reduction phase as soon as possible with a goal of completing analysis in 18 months.  Preliminary design review can be conducted within this process with an accelerated down-selection at the end of the phase.  To do otherwise will invite multiple industry challenges and congressional investigations causing additional delays that will further handicap the effectiveness of the carrier’s air wing.

The American carrier is the symbol of American power throughout the world, and the MQ-25 represents the key addition that will enable the carrier’s air wing to “buy back range” and maintain the carrier’s relevance into the third and fourth decade of this century. To allow naval aviation to so unambiguously challenge the orders of Navy leadership as laid out in the August 2016 Program Decision Memorandum and compromise the aircraft’s mission tanking capabilities with ISR characteristics is to invite future disaster. The MQ-25 program is settling well below glideslope and it is time to pull up.