Bernie Sanders, Mike Lee and Chris Murphy All Have One Thing in Common 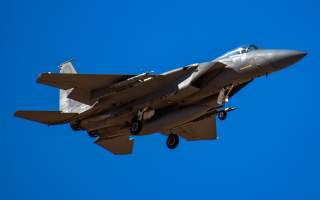 On February 28, a bipartisan group of senators introduced a resolution designed to sharply curtail U.S. involvement in the Saudi war against Yemen. Sens. Bernie Sanders, Mike Lee and Chris Murphy are cosponsoring a resolution that would remove U.S. armed forces from activities such as targeting assistance, aerial refueling, intelligence and logistical support to the Saudi armed forces. The vehicle for the call to remove U.S. forces from the war is the War Powers Resolution, a 1973 law designed to limit presidents’ ability to wage war without congressional authorization.

The resolution suggests that by materially supporting the Saudi war effort in Yemen, the United States has effectively become a cobelligerent. The Saudi-led war began in March 2015 as an effort to defeat Houthi rebels who controlled a substantial part of Yemen. Riyadh, among others, believes that these rebels operate with the support of Iran. However, despite a relentless air campaign, a significant ground campaign (including contributions from around the Middle East), and a devastating naval blockade, the Saudis have not been able to impose order on Yemen; just last month, Houthi rebels fired a ballistic missile at Riyadh. Some analysts in the United States have despaired of seeing any prospects of success for the Saudi war effort, and many Americans have wondered why the United States continues to contribute to the conflict.

The War Powers Resolution was passed in 1973 in an effort to constrain the power of the president to wage war. As commonly understood, the WPR requires the president to notify Congress of a conflict, and to seek congressional approval if the conflict exceeds a sixty-day window. If Congress expresses disapproval, the president has thirty days to complete a disengagement of U.S. forces.

Most presidents have argued that the WPR’s restrictions are unconstitutional; the president, as commander in chief, has powers and responsibilities to defend the United States that do not come under the direct review of Congress. The Constitutional questions are complex and remain unresolved. Even accepting the constitutionality of the WPR, a president might argue that the level of military commitment in Yemen (in which the United States plays an active support role) does not rise to the level of committing armed forces to military action. Indeed, the Obama administration argued that its intervention in Libya did not constitute the use of armed force in the sense that the framers of the WPR had intended. However, by the standards of international law, the United States at least comes close to participating in the conflict as a cobelligerent, especially as the United States has attempted to expand the definition of cobelligerency in recent years.

This resolution has two apparent purposes; first, to suspend U.S. support for the Saudi war effort, and failing that to jump-start the conversation in the United States about the wisdom of continuing to support the war effort. In the Yemen conflict, the United States has supported Saudi operations by providing extensive arms shipments, targeting data and inflight refueling of Saudi attack aircraft. While U.S. policymakers have argued that the supply of targeting data (as well as precision-guided munitions) has worked to limit the destructiveness of Saudi airstrikes, that campaign still appears to fall short of internationally accepted standards.

This resolution could have a significant effect on the way the United States conducts its foreign policy. From the Cold War down to the present day, the United States has supported proxies in conflicts around the world. Although the Saudi effort is an outlier in the extent of support, it is not uncommon for the United States to supply allied governments (and sometimes allied militant groups) with weapons, intelligence, training and expertise. Indeed, the complex maintenance requirements of modern weaponry often demand the presence of U.S. personnel for maximum effectiveness. Moreover, over the past fifteen years the United States has dramatically stepped up its special-forces presence around the world. These operators often work with governments fighting against rebels, insurgents and terrorists. This resolution could serve as a precedent for congressional intervention into situations where the United States arguably acts as a cobelligerent, irrespective of whether it directly deploys armed forces.

But tools aren’t any good without an interest in using them. In the 1980s, Congress took great interest in the foreign policy of the Reagan administration, regulating its conduct towards Nicaragua and heavily criticizing its Central America policy. But Congress largely deferred to the president in the conflicts of the 1990s, including the Gulf War and the Yugoslav Wars. And after 9/11, Congress displayed no inclination to limit the prerogative of the executive, passing two AUMFs that gave the president widespread authority to conduct wars in Iraq, Afghanistan and elsewhere. Despite some concern over Obama administration policy in Libya, Congress stood aside while the United States supported French, British and Libyan forces as they ousted Qaddafi.

U.S. support for the Saudi war in Yemen, in some sense, a payoff to Riyadh for the nuclear deal with Iran, which was strongly (if quietly) opposed by many in the Saudi government. Underwriting the Yemeni campaign represented a promise that the United States remained committed to the long-term relationship. But as increasing concerns about Saudi Arabia’s war policy, its support for international terrorism and its grim human-rights record have revealed, the U.S.-Saudi alliance may not be on the firmest of ground. And indeed, U.S. support for the Saudi war on Yemen has inspired bipartisan ire. Saudi Arabia appears to be conducting the war with little regard for the protection of civilians, and with no clear strategic objective.

More generally, this resolution may indicate the spark of interest on the part of Congress in regulating executive conduct of foreign policy. While the technicalities of what constitutes a deployment of armed force are worth thinking through, the Sanders-Lee resolution arguably fulfills the broad intent of the WPR’s framers.

The Obama administration committed the United States to a war in Yemen with obscure strategic goals, no public debate and no apparent end. The Trump administration has only redoubled the U.S. commitment to this war, waged with American bombs, American aircraft and American intelligence. At the very least, the resolution hopes to force a debate on whether the United States should continue to commit its money, weapons and prestige to this conflict.