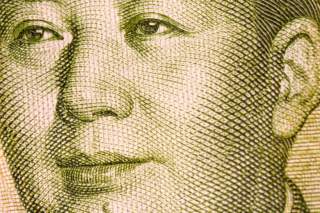 There's a rule in economics called Goodhart's law: when a measure becomes a target, it ceases to be a useful measure. If a government chases a particular economic variable, then it becomes influenced by policy, and so loses its meaningfulness as an input. 'Information value' is lost in the interference. Because managing economies is hard and good information is scarce, that's a big problem.

First, state institutions are actively supporting equities, reportedly on Chairman Xi’s personal order to push prices up. Second, after long controlling the exchange rate, policy-makers briefly let it go, only to rush back in days later to fix it again. These panicked interventions have cost Beijing dearly in both money and credibility and jeopardies its entire reform process.

About a year ago, it became apparent that policymakers were aiming to boost the stock market, presumably to raise consumer confidence and hopefully some new equity along the way. It's understandable that leaders viewed share prices as a signal of their good stewardship. But by manipulating those prices—either through boosterish or direct intervention—they distorted the rationality of the market.

That bubble then popped, wiping out U.S.$4-5 trillion, triggering a 'national team rescue fund' and a witch-hunt. Some academics think that until the politicians started tampering with it, China's equity market was doing okay interpreting information from the real economy (inputs) and converting those signals to sensible prices (outputs). They recommend the control freaks step away and let the market do its magic.

That is easier said than done. The market is a capricious master. When Beijing devalued its currency two weeks ago, ostensibly in response to supply and demand, the reaction was so violent that the central bank was forced back in to support it. They've opened Pandora's box. As FT's Asia bureau chief David Pilling marvels: “In order to convince markets the bank was seeking a market-friendly exchange rate regime it has been obliged to intervene on a massive scale. How perverse is that?” The reason Beijing is 'tied in knots' is because it is vainly trying to defy Goodhart's law: targeting prices while trying to persuade market agents that those prices are right. According to Pilling, that's what China's leadership means by 'a decisive role' for markets alongside a 'dominant role' for the state.

These recent episodes tell us a lot about the reform challenges ahead for China's policy-making elites. They want the discipline of capitalism, to avoid the imbalances that systematic targeting causes: huge piles of wasted or misallocated money. There's nothing inherently wrong with targeting outcomes. Many governments target inflation using (inter alia) inflation itself as a signal. That's just a simple feedback mechanism: inflation as both an input and an output. Yet even something as straightforward as inflation is actually hard to measure.

It's telling that China's national statistics bureau keeps the exact constituents of its inflation basket a state secret. So we have to take the bureau at its word. Likewise, it confidently churns out curiously smooth GDP data, which never fall short. China's aggregate output must be a bogglingly complex thing, embedding a vast amount of private information. Yet the bureau knows it for certain just days after the quarter's end. How can this be? Essentially, Beijing can 'target' these CPI and GDP results because they are unchallenged: they are whatever Beijing says they are. Others don't get a vote.

But others do get to vote in the contested space of financial markets, where no single actor has a monopoly over information and the clearing price is continuously reached by consensus. Social systems like markets have to incorporate the perceptions, expectations and actions of millions of 'voters.' In the case of the foreign exchange market, they might be literally voting with their feet. Financial markets are a popularity contest, like elections are. Ruling elites may dislike the result. But compulsion (a.k.a. 'financial repression') is a resentful substitute.

China's not collapsing. Most people on the street care about more mundane matters than the markets, and domestic press coverage has been silenced. Xinhua blames the West for the market turmoil, and the yuan devaluation probably was forced by external events like oil, Fed signaling and competitor devaluations.  Foreign commentators criticize Chinese actions as non-transparent or 'clueless'. But all the complaining overlooks one simple reality: a market-driven model will mean a huge decline in Beijing's control over its own economy.

China reached middle-income status with the central authorities determining the most critical variables in the economy while letting private markets prosper in the gaps. Now on the brink of liberalizing the big stuff like interest rates and currency—possibly even relinquishing controls over cross-border money flows—they are flinching.

Previously they possessed almighty powers to establish economic facts without heed for others' opinions. They commanded the public media narrative and always had the casting vote. It's said that the first casualty of war is the truth. Their 'war on the market' will destroy precious sources of independent economic information. Their latest financial smash-up highlights Goodhart's paradox: by 'saving' the market they risk burning it down.